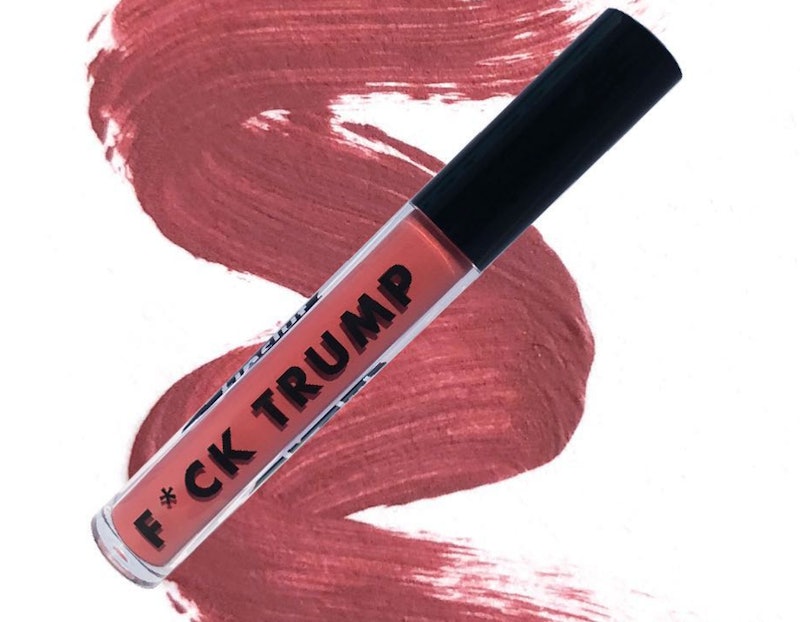 Here's a "Wow" moment to start your day. It took just over two weeks for Lipslut's F*ck Trump fundraiser to generate $100,000 in opposition to Donald Trump's "Zero Tolerance" immigration policy, which resulted in displaced children, tore at the fabric of families, and left Americans horrified in its wake.

Lipslut is donating 100 percent of the proceeds from orders of its previously existing, matte and mid-tone pink F*ck Trump lipstick toward organizations that are dedicated to helping families affected by the policy. Those groups include RAICES, KIND, Las Americas Immigrant Advocacy Center, Young Center for Immigrant Children's Rights, and Al Otro Lado, per the brand.

Lipslut also told Bustle via email that its "Fight Zero Tolerance" fundraising effort has been so successful that products have been back-ordered all month.

Lipslut previously raised $40,000 for charity and it has far surpassed that tally thus far. There are still nine days left in the fundraising effort, as the 100 percent donation campaign is active through July 19. The brand hopes to finish strong and raise additional monies. So, let's help keep that momentum going!

If you've not yet ordered a lippie, there is no time like right now! Your pout will look utterly gorj when swiped with this shade. But you will feel even better about doing your part to right social wrongs and to correct grievous injustices.

The brand's ethos is simple and powerful. It exists to integrate philanthropy into every day life while delivering quality cosmetics. If you labor under the illusion that lipstick is frivolous or simply about making pretty puckers, think again! It's actually an impactful tool for change and something that empowers the women who wear it in multiple ways, thanks to Lipslut's endeavors.

The brand is essentially the direct result of the 2016 presidential election. It was formally founded by Cal Poly San Luis Obispo student Katie Sones on the night of Trump's inauguration. Sones has since graduated but continues her crusade to flip the middle finger to the current socio-political landscape.

Sones' passion for cosmetics equals that of her passion for activism. Lipslut typically donates half of its proceeds to civil rights charities chosen by customers. This current campaign has upped the ante with the 100 percent donation.

It's a creamy and dreamy, looks-good-on-everyone neutral pink with a mega matte texture and a major message. Grab a tube and help the families who were separated at the border.

In other Lipslut news, it is launching a brand new shade that has a brilliant backstory.

Sones told Bustle via email that the shade was inspired by the hate mails that the brand received as news of its "Fight Zero Tolerance" fundraiser began to circulate.

"Amongst the many emails, there was one that stood out in particular," Sones told us. "A random woman named Kim called our team 'leftylibglobalistsantifacommiesocialisthollyweirdopigs.' I couldn't stop laughing at the insult and thought it was so bizarre [that] I decided to post it on our Instagram."

The Lipslut community leapt to action, suggesting the brand take the power back from the insult and use it as the name of a new shade. "We listened," Sones said. "I thought a limited drop would be perfect for such a silly product, so here we are!"

The pre-order is almost sold out, so why not scoop up a tube while it's still available? It's a sultry, vampy shade. It also celebrates the solidarity of this movement by taking a silly and ignorant statement and turning it into an agent of change.

Sones is working on her brand full-time now that she has earned her diploma. "New colors and causes are definitely in the works," she tells us. That's a beautiful thing for our lips and our society.