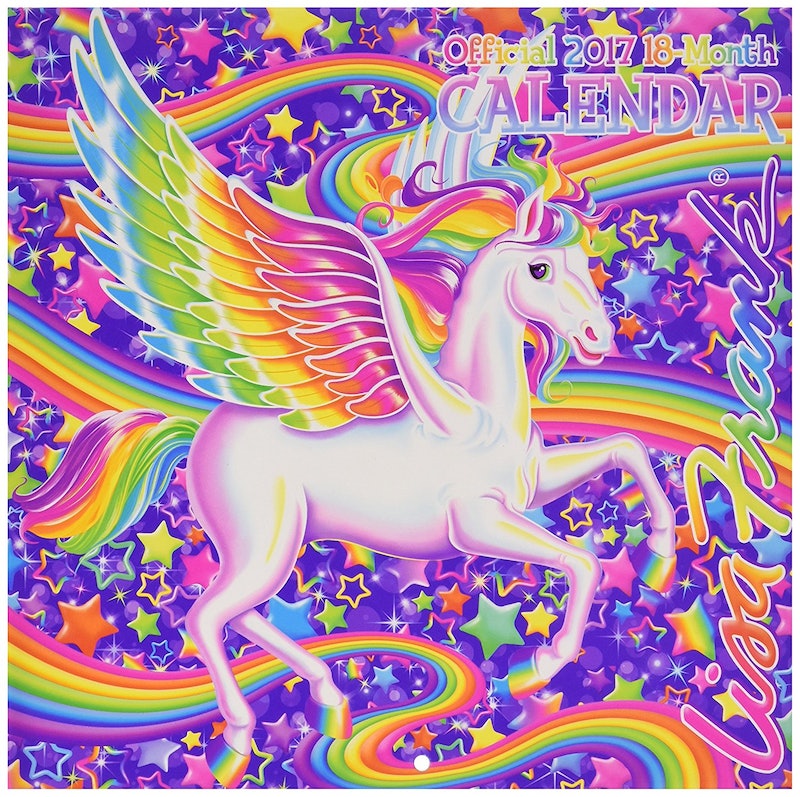 All that time you spent in the 1990s buying notebooks and worshipping dolphins has finally paid off, because Lisa Frank is getting a live action movie, in which all the rainbow creatures of your childhood will come together in a psychedelic explosion of rainbows and nostalgia. This is the kind of news that convinces me that mind reading is a thing, because all I wanted to do as a kid was crawl into the world of Lisa Frank. It was so colorfully displayed on the outside of the file folders I definitely needed as a third grader.

Apparently the newly-announced project will combine live-action and animation, based on Frank's classic, fluorescent-splashed artwork, so inextricably bound in my brain to the '90s,. On top of that, it's already in development, so start thinking about clearing your schedule.

Frank will be teaming up for the feature with Jon Shestack, a producer who has lent his hand to projects like Ghosts of Girlfriends Past, Dan in Real Life, and, to get a little closer to this genre, the adaptation of the 2010 YA novel Before I Fall. (That's due out later this year.) You and I and everyone we know who was obsessed with Lisa Frank school supplies growing up aren't the only ones looking forward to this project. Tell 'em, Mila Kunis.

Frank herself is bubbling over with excitement in the announcement of the upcoming feature:

I have always wanted to do a feature film that brings the world of Lisa Frank to life. We have so much backstory on our characters and they have been alive in my imagination since the beginning.

If you can believe it, I was so absorbed by the bright colors and fantastic elements of the animals themselves that I never even got as far as imagining a backstory for them. As far as I was concerned, they were living out their entire existence on the outside of my pencil case, and I never imagined much beyond that. So hearing now that Frank has a Rowling-esque backstory on all these creatures is almost more than my little brain can take.

I can't wait to meet all these characters and find out what they've been up to since our paths last crossed on my elementary school desk.

More like this
22 Movies On Netflix That Are Perfect For The Whole Family
By Bustle Editors
Reese Witherspoon Gave Fans Hope For 'Legally Blonde 3' After This Surprising Movie Inspired Her
By Jake Viswanath
Jennifer Coolidge Needs 'Legally Blonde 3' To Happen So She Stops Getting Hot Dog Jokes
By Jake Viswanath
Before 'Bullet Train,' Revisit These Brad Pitt 'Fight Club' Premiere Photos From 1999
By Grace Wehniainen
Get Even More From Bustle — Sign Up For The Newsletter