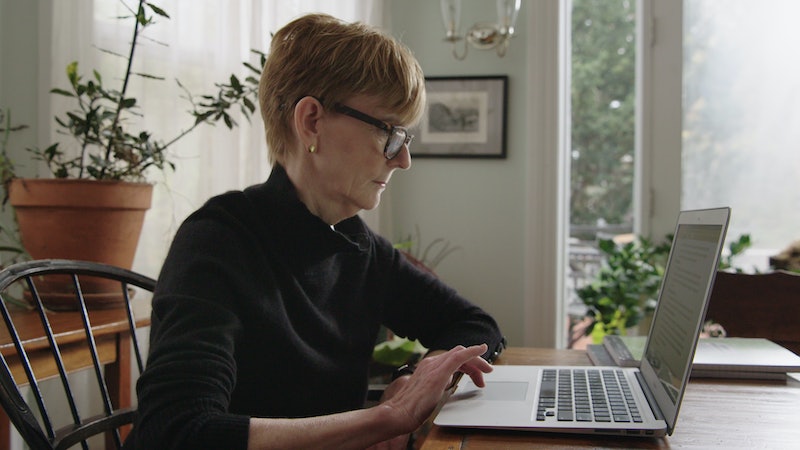 Anyone who has ever Googled a remedy for a stomach cramp in the middle of the night only to eventually (and wrongfully) deduce that they have an advanced terminal illness knows that taking medical advice from strangers on the internet is not always the best move. So the fact that Dr. Lisa Sanders, the host of Netflix's Diagnosis, is such a cheerleader for crowdsourcing medical diagnoses is kind of surprising. You'd think a Yale Medical School professor, physician, and New York Times columnist would have a little more common sense, right? But after watching patient after patient find solidarity, peace of mind, and yes, sometimes a life-changing diagnosis on her new series, you might start to think differently about the benefits of crowdsourcing your own symptoms. Or at least getting second — or third, or sixth — opinion when it comes to your health.

Then again, the subjects of Diagnosis aren't dealing with passing indigestion (or the kind of insomnia that can lead you down wild WebMD holes about what said indigestion really means). These patients are really suffering, scared, and searching for answers. Take Angel from Episode 1, a young woman who has repeated episodes of crippling muscle pain that land her in the hospital over and over again and make her urine the "color of coffee grinds." Or the mother of 6-year-old Sadie, who's looking for other options after she was told that the only answer for her daughter's early Rasmussen’s Encephalitis diagnosis was to cut out a significant portion of her brain. Or Willie Reyes, a Gulf War vet who is losing his memory and cognitive function at a breakneck pace — and bankrupting his family with every visit to another doctor who essentially shrugs their shoulders at him, stumped.

Sanders tells Bustle that it's not doctors' fault they can't figure things out all the time — it's not always exactly what they're trained to do. She uses Angel's case as an example. "Doctors in the hospital dealt with her life-threatening illness, but didn't have the time or bandwidth, or it’s not really their job, to think, 'Why is she having all these episodes?'" she says. "That was sort of above their pay grade and it’s also just not what you do when you’re a doctor who takes care of a lot of patients in a hospital."

In a hospital setting, a doctor's job is to keep you from dying, Sanders explains. They're not always in a position to really dig into underlying causes, especially when they aren't really apparent, which can be frustrating and even demoralizing at a certain point for their patients. That's where Sanders comes in.

Sanders, who also used to consult for Fox's House, has been writing her Diagnosis column for The New York Times Magazine since 2002. Much like the Hugh Laurie-starring television show, each column tracks a patient's journey as they search for answers about their medical condition. But all of the cases in her columns are already solved when colleagues tip her off about them at conferences or dinner parties, she says. What Sanders had always really wanted to do was take unsolved cases and use the Times' resources to reach out to readers who might have answers. That's exactly what she does in each episode of the Netflix series. The show's seven subjects were all featured in The New York Times last summer; each episode tracks the various responses from readers who had thoughts about their conditions, how Sanders sifted through them, and, in most cases, how she ultimately came up with an answer or two for the patient in question.

While offering up a vulnerable patient to the people of the world wide web sounds like an awful idea, Diagnosis, which can only be described as "Queer Eye, but make it medical," shows how that's not always completely unwise.

"Whenever you open the conversation, the signal-to-noise ratio is always an issue," Sanders says. Especially because it's not like she was consulting a trusted gaggle of Ivy League-educated doctors she had already vetted over brunch. "The hardest part [of using crowdsourcing in Diagnosis] was just seeing all of the things that I didn’t think were the right answers or not in the right neighborhood at all," she adds.

"Just the quantity of information we got, you have to go through it carefully," she says, noting that she couldn't just dismiss everything that didn't immediately sit right with her. "You have to think, 'Is there a way that this could be a good answer?' and be open minded."

While doctors, researchers, and other medical professionals from around the world sent in responses or suggested answers for the unsolved cases, a lot of the most useful responses came from people who had family or friends with similar issues as some of the patients. "Those were the ones that worked best to me," Sanders says. "It’s clear from some of the earliest research that’s been done on diagnosis that the person or doctor most likely to get the right answer is the person or doctor who has seen something before. It’s also true among family members or people who aren’t doctors, if you’ve seen something and have experienced it, you notice it when you see it again."

It's the same idea as an online health forum where people share their own workarounds, treatments, and experiences with a health problem — having someone else sympathize with that weird rash you just Googled can often be more comforting than making an actual doctor's appointment. And sometimes, it's more effective.

This is best understood through the case of Reyes, whose diagnosis for a slew of unknown illnesses in Episode 3 is determined to be Gulf War Syndrome. Because it is something that effects only military veterans, whose medical care is often siloed off by the Veterans Affairs Office, regular doctors just weren't considering it at all. Sanders admits that she didn't either at first, going so far as to question the validity of the syndrome on the show. But vets and researchers who noticed that little line about military service in the early '90s in Reyes' bio in the Times cracked the case.

But it's not always a happy ending for the series' participants, and receiving crowdsourced solutions to your medical problem through a Yale medical professor isn't exactly something that everyone has access to. Sometimes, the diagnoses on the series were wrong, something that Sanders acknowledges can happen "when you open up a question to a larger audience." Other subjects depicted in the series, like Episode 5's Lashay, a teen who couldn't keep down food or water, weren't as open to the solutions from crowd, despite being dismissed by her doctors as having an eating disorder or faking it. For others, the diagnosis they received from Sanders' crowd was just the first step on a long, hard treatment path that won't necessarily involve being "cured."

And then there's the elephant in the room throughout the series — the American health care system. Many of the subjects of the Netflix series are in extreme medical debt because of their health problems and received specialty care on the series that they likely could not normally afford.

Sanders notes that as a researcher she has the ability to spend as much time as she wants on her patients, but your standard general practitioner "has to pay the bills." Whether that means rushing through patients or not performing tests or analyses on patients because they are uninsured, it means that a lot of people out there will never have the luxury of having Lisa Sanders hold their hand as they Skype with Italian geneticists who want to examine their DNA. For free.

Sanders is matter of fact about it — it's the nature of the healthcare beast at the moment. Her subjects were also a diverse group of people, but in the real world, research has shown that many patients, especially women of color and transgender people, are often ignored or brushed off by their doctors.

Clearly, crowdsourcing your illness in The New York Times isn't always the answer. But Diagnosis makes a strong case for pushing back on your doctor if something doesn't sound right or isn't working. It's always worth getting multiple opinions before making any significant health decisions. Just maybe don't do it on the internet in the middle of the night.