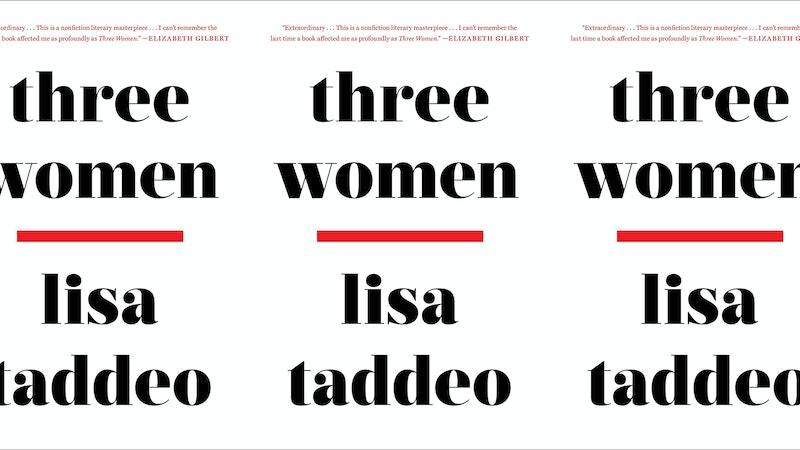 If you're in the middle of reading the year's biggest books, you're going to love this news. A buzzy nonfiction debut, Lisa Taddeo's Three Women, is becoming a TV series on Showtime as a television series. The book centers on the lives of three women, and on their relationships with men, but the series — like the book on which it is based — aims to be about more than its straightforward premise.

Published in July 2019, Lisa Taddeo's Three Women paints intimate portraits of three disparate adults living in the U.S. First, there's Lina, whose husband's constant refusal to kiss her on the mouth leads her to run away with her high-school sweetheart. Next up is Maggie, a young woman who steps forward when the married English teacher who seduced her in high school is voted North Dakota’s Teacher of the Year. Finally, there is Sloane, a restaurateur who begins to question whether the sexual dynamics of her marriage, in which her husband chooses men and women for her to sleep with, is working for her.

As Entertainment Weekly's review of Three Women observed, "these dilemmas could easily come off as a certain kind of erotic cliché, sensational filler for advice columns and daytime talk shows," yet Taddeo's work doesn't offer a prurient look at her subjects. Given that the author herself will write and executive produce the Three Women adaptation at Showtime, fans can look forward to a TV series that treats Lina, Maggie, and Sloane's stories with the same care. With the based-on-a-true-story series Masters of Sex under its belt, Showtime has experience balancing the sexy and salacious in its programming, as Deadline notes.

Written over the course of eight years, much of which was spent embedded in the subjects' communities, Three Women made its first appearance on the New York Times Best Seller List at the No. 2 spot for the week of July 28, unseating David McCullough's The Pioneers. The book is a first for two-time Pushcart Prize-winner Taddeo, who has a short-story collection and first novel forthcoming.

There's no word yet on when Three Women will come to Showtime, but readers have plenty of other book-based TV series to look forward to in the near future. From the fourth season of The Handmaid's Tale on Hulu, to the first two seasons of His Dark Materials on HBO, page-to-screen adaptations are taking over the airwaves like never before. When Lisa Taddeo's first book comes to TV, it will be in good company.

More like this
The Plane Crash In 'Dear Edward' Is Based On A 2010 Tragedy
By Grace Wehniainen
Netflix Shut Down 'Bridgerton' S3 Rumours About A “Very Dark” Storyline
By Bustle
Prince Harry Incorrectly Recites Christina Aguilera’s “Genie In A Bottle” Lyrics
By Jake Viswanath
The Mysterious Gunther Corporation From 'Gunther’s Millions' Has Dissolved
By Brad Witter
Get Even More From Bustle — Sign Up For The Newsletter
From hair trends to relationship advice, our daily newsletter has everything you need to sound like a person who’s on TikTok, even if you aren’t.