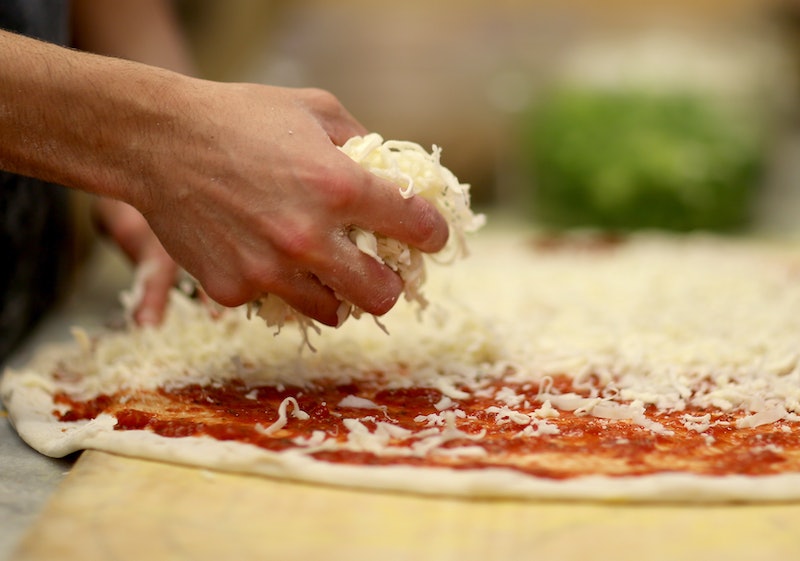 Is there an amount of cheese that’s too much cheese? No? Are you sure about that? Because Little Caesars just announced a pizza stuffed with three feet of cheese, as reported by HelloGiggles. It’s basically the marketing campaign equivalent of being like, “Oh, you like cheese? Haha okay well PROVE IT.”

The new stuffed crust pizza—Obviously it’s stuffed crust. Little Caesars did not come to play — has been dubbed the ExtraMostBestest™ Stuffed Crust Pizza. I’m guessing “We Are All Slaves To Cheese-Covered Capitalism And Will Eventually Succumb To It” was too long or something.

The pizza will be topped with a blend of mozzarella and Muenster, slices of pepperoni, and uh, oh yeah, a yardstick-sized length of cheese shoved into the crust. At participating locations and for a limited time only, the pizza will be available as part of their Hot And Ready offering between 4 and 8 p.m. For just $9, you too can truly push the bounds of what is an acceptable amount of cheese to consume.

“Like so many people, we are truly obsessed with cheese,” Edward Gleich, Senior Vice President of Global Marketing at Little Caesars, said in the press release for the cheese monstrosity. (It’s a statement that sounds a little like a robot trying to pass as a human. Like, “As for me myself personally as a person, I do love a good cheese.” But I digress.) “So it’s only natural that we’ve been asking ourselves, ‘just how much cheese can one pizza hold’” Gleich continued. “I think the new ExtraMostBestest™ Stuffed Crust Pizza pushes it to the brink.”

Ah yes, the scientific measurement of cheese: “to the brink.”

Does the pizza look good? I mean, yeah. It’s a pizza. If a good cheese-pull photo doesn’t give you butterflies in your stomach, I don’t know what will.

Still, three FEET of cheese?! I’m not a mathematician or dietician, but I’m pretty sure that’s a lot of cheese. Like, a literal 36 inches of cheese. Like, three $5 foot long Subway sandwiches sitting end to end but you subbed out all the meat and veggies and bread for cheese. Like, have you ever seen a Great Dane? It’d be a string of cheese that’s as tall as the average Great Dane. To be honest, I’m mostly just trying to talk myself out of ordering this pizza deal.

Even calling it a “deal” seems like an understatement. “Challenge” or “dare” would be more apt for this particular pizza. Do you think you have to sign a waiver before ordering this pizza?

The ongoing debate about whether cheese is good or bad for you hasn’t really been conclusive. The good news for any cheese aficionados out there is that a study from December of last year found that cheese may have more health benefits than previous research suggests. In fact, the study found that regular consumption of cheese could be linked to lower risk of cardiovascular disease and stroke.

There is, of course, a catch to this most recent report. The amount of cheese tied to these benefits is a measly 40 grams of cheese a day. That’s about the size of a matchbox. Again, I’m no expert, but most matchboxes aren’t three feet long.

As with most food-related things, the key is moderation. Thirty-six inches of cheese probably doesn’t fall under a “moderate” amount of cheese. But by all means, indulge in the occasional ExtraMostBestest pizza. Just don’t pizza without a buddy — honestly, if not for the sake of finishing it, then so you have someone to fish you out if you get lost or tangled in the three foot concoction. I’m sure you won’t have trouble finding someone to take on these cheesy endeavor with you.

More like this
TikTok's Favorite Bartender Thinks Mimosas & Bloody Marys Are Out For Brunch
By Alexis Morillo
Are We Drinking Rosé All Wrong?
By Sheila Yasmin Marikar
Here’s What Sarah Jessica Parker’s Canned Cosmo *Actually* Tastes Like
By Emma Garza
Starbucks’ Chocolate Cream Cold Brew Tastes Like This Retro Candy
By Emma Garza
Get Even More From Bustle — Sign Up For The Newsletter