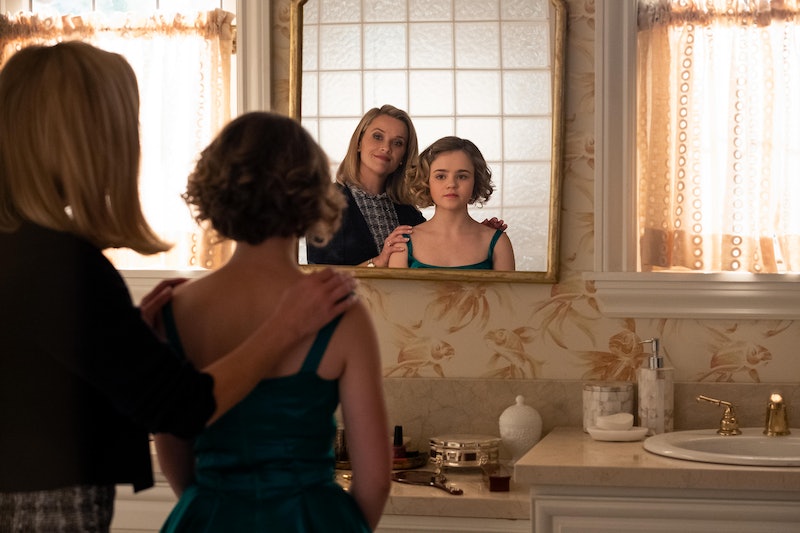 As a stan of Celeste Ng’s novel Little Fires Everywhere, I’d been anxious to watch the Reese Witherspoon-fronted Hulu series. The book tells poignant stories about motherhood and race in the 1990s. But because I’m gay and therefore I watch or read everything through lesbian-colored glasses, I mowed through the pages of Little Fires wondering, when will it get gay?! The short answer is that the book only sort of does. (Light spoilers ahead.)

The story centers on two moms with extraordinarily different backgrounds and levels of privilege: Elena Richardson (played by Witherspoon in the Hulu series), a Stepford-esque mother of four who’s both an impeccable housewife and a working journalist, and Mia Warren (Kerry Washington), a nomadic artist and single mother. Elena’s youngest child Izzy is a key part of the poisonous rift that forms between the two mothers. Izzy feels subjugated by her tyrannically straight-laced mother, who wants her to fall in line by dressing feminine and going by her given name, Isabelle. Elena rents the apartment she owns to Mia and her teenage daughter Pearl, and Izzy is at first intrigued by Mia, then obsessed with her.

A story about an angsty 14-year-old girl who loves art, combat boots, backwards baseball caps, and lionizing an older woman as if she’s a goddess among men? This is a story about coming out.

Izzy and Mia are one in the same: artistic, pugnacious, political, angry. Izzy has never had a free-spirited female figure in her life like Mia, and once she does, she realizes it’s OK to be who she is. Mia helps Izzy embrace the parts of herself she’d been asked by her conservative mother to bury (in the book, that was anger, artistry, and tomboyish clothes). I’m telling you, I read this book and thought: A story about an angsty 14-year-old girl who loves art, combat boots, backwards baseball caps, and lionizing an older woman as if she’s a goddess among men? This is a story about coming out. But while the book never suggests anything about Izzy’s sexuality, the first three episodes of the Hulu series, which dropped last week, make Izzy’s struggle with her sexuality much more explicit.

Just like in the book, I was tipped off immediately to Izzy’s gayness in the Hulu series via her backwards hat and perpetual frown — both inherently lesbian aesthetics. But there’s an additional storyline in the show that wasn’t in the book: In the show, Izzy has recently suffered a falling out with her former BFF April. She confronts April in the school bathroom, asking why they aren't friends anymore. To which April replies, “You know why, freak.” Meanwhile, Izzy’s classmates are bullying her. Someone hangs Ellen DeGeneres’ famed 1997 Time Magazine cover, which reads, “Yep, I’m Gay,” in her locker; everyone at school calls her Ellen as a burn. There’s some sort of rumor brewing about Izzy’s sexuality, one that was started by April.

In one particularly heartbreaking moment between mother and daughter, while discussing April and other bullies spreading rumors, Elena tells Izzy that “everybody’s telling a story.” She adds, “If they’re saying something untrue, then you should change the story.” She asks Izzy if the things her bullies are saying is untrue, to which Izzy replies, “of course.” Elena drives the point home: “Then you should change the story.” That conversation leads the vulnerable and confused Izzy to go to the school dance in a girly dress and make out with a boy in front of April. In that moment, we see that April is actually hurt, even jealous — confirming that, yes, Hulu actually gayed Little Fires Everywhere. Something gay went down between Izzy and April, and now Izzy is facing the consequences.

It’s always disappointing when a character’s sexuality is erased in the story’s on-screen adaptation. As a DC fan, I felt slighted by the ambiguous to nominally straight depictions of queer comics characters in both Wonder Woman and Birds of Prey. So not only do I feel extremely vindicated knowing that my gay Spidey senses tingled appropriately in Little Fires, but more importantly, I'm thrilled to see that series creator Liz Tigelaar took the leap and turned queer subtext to text — something that still happens infrequently today.

And it just works for this show. The metaphor of Izzy’s boiling, repressed, queer anger manifesting in and climaxing in, well, (book spoiler alert) burning down the house that trapped her will be all the more powerful now that a major reason for her angst is explicit.

More like this
Netflix Shut Down 'Bridgerton' S3 Rumours About A “Very Dark” Storyline
By Bustle
Wait, Is Barney Stinson Related To Sophie On 'HIMYF'?
By Gretchen Smail
Everything To Know About 'Only Murders In The Building' Season 3
By Gretchen Smail and Kadin Burnett
Pamela Anderson’s Dating & Marriage History Could Be Its Own TV Series
By Jake Viswanath
Get Even More From Bustle — Sign Up For The Newsletter
From hair trends to relationship advice, our daily newsletter has everything you need to sound like a person who’s on TikTok, even if you aren’t.