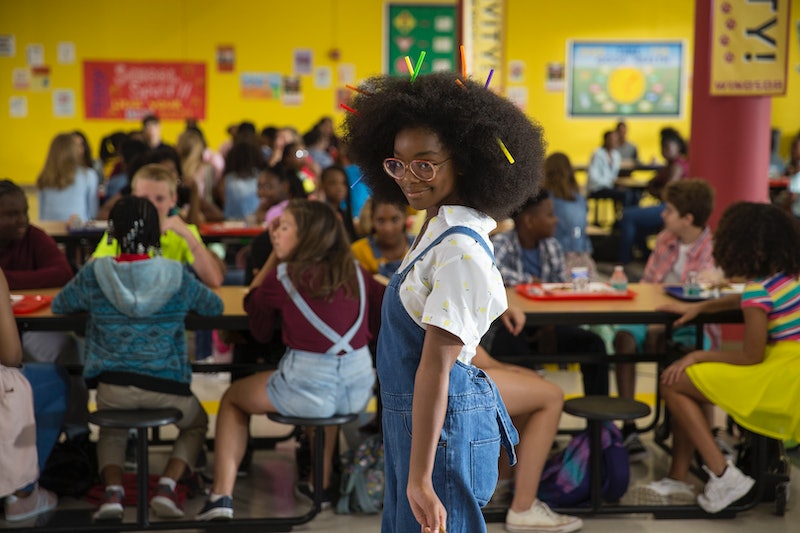 In the new family comedy Little, out April 12, Regina Hall and black-ish star Marsai Martin share a role — that of Jordan, a bullied teen who becomes a bullying adult... and then finds herself plopped magically back into her middle school nightmare. The plot is the brainchild of Martin, who was just 10 years old when she sat down with her parents and came up with a pitch for a Big-esque comedy for kids like her. From the very start, Little was intended to be a celebration of "Black Girl Magic," Bustle learned at a visit to the movie's Atlanta set earlier last year. And the creative team took steps to make sure that girls and women of color were involved on every level.

"This movie, universal theme, relatable to everybody, but it is very much through the lens and from the perspective of these characters," executive producer Will Packer (who also produced Girls Trip) says of Little's body swap plot. "When I was talking to Universal about it, I said, 'You don’t have a movie for mothers to take their daughters to, especially black mothers and black daughters, brown mothers and brown daughters.'"

Packer came on board to the project early, after taking a meeting with Martin, her father, and black-ish creator Kenya Barris. Even before that, Hall, also an executive producer, was involved and set to costar. (Martin notes that, in addition to looking up to her professionally, Hall also "gives the best hugs.") And as the film went into development, What Men Want writer Tina Gordon was secured to direct, and also co-write the script. Packer notes that as you drill down from the list of women directing features to women of color directing features to women of color directing comedy, Gordon is one of a very few. And with her at the helm, the production was built out to be representative of its core audience, on and off-camera.

In the director's mind, that Martin's pitch is becoming a full-fledged studio movie starring her, Hall, and Insecure's Issa Rae as Jordan's put-upon assistant April is Black Girl Magic in and of itself. "We just embraced that, and found artists, production designers, costume designers," Gordon says. "Everything you see on the walls, the wine you see in the movie —it’s young, black women, women of all colors that came together to sort of support that idea."

Our home base for our press visit to Little is a section of one of the main sets — that of "Big" Jordan's office, a tech company that she founded and runs. It's bright and modern, its walls decorated with the kind of art that you wouldn't be surprised to see at Google HQ, and with blown-up magazine covers featuring Hall's character. Viewers won't necessarily know when they see the movie that much of what they see was sourced specifically to showcase women of color, whether they be artists or business owners. But Gordon believes that the specificity makes a difference overall — and not just because the film is supporting those women by using their work and products.

"I feel like it’s details that you end up feeling in the movie," she says. "It touches you a little bit."

Costume Designer Danielle Hollowell and Assistant Costume Designer Provi Fulp Ramphal relished the opportunity to conceptualize each character's wardrobe with pieces by designers of color, of all genders. Those characters' experiences inform their choices — "I try to think about how this person moves through the world, and why someone does something when they wake up," Hollowell explains. Hall's Jordan, for example, is a black woman in a position that's mostly occupied by white men. So her clothing is expensive, but also eye-catching, colorful, graphic, and dynamic. "She comes through the world a little bit through the side door as opposed to from the front," Hollowell says.

With Hall's input, the team also designed a hairstyle that speaks to Jordan's creativity and her edge: a sharp, hot pink-tinted bob. "I start every character off with hair," the actor says. "So looking at her job, she runs a tech company, so she’s together and stylish and forward-thinking, and I loved the idea of playing with color."

Meanwhile, Martin's Jordan reflects not only a different age bracket, but also a different time period: the early '90s. So look for custom airbrushed pieces and other details that are "TLC-esque," says Hollowell. But in addition to finding local designers that add authenticity to the Atlanta setting, the team also incorporated bigger names.

"We want to make sure that people know that our community is part of this high-end, luxury, high-fashion, creative community," Ramphal says. "This is American culture, people need to understand that ... We’ve always influenced fashion."

For Packer, Little is unique in that it's bringing generations of black women together to make something for moviegoers of all ages, who've "not seen this movie with these people."

"Marsai has clearly got next, Issa’s got now, Regina has had it, and then you’ve got Tina behind the camera who wrote it along with Tracy Oliver who also wrote on Girls Trip, those are all black women," he says. "So one of the things I’m very happy about, and one of the things that I know how to do well is to get out of the way when black women are doing their thing."

More like this
Lauren Lyle Is Keeping The Contents Of Karen Pirie’s Bum Bag A Mystery
By El Hunt
On 'The Handmaid’s Tale,' Christine Ko Fights Back
By Gretchen Smail
Everything To Know About The Long-Awaited ‘Community’ Movie
By Stephanie Topacio Long
20 Photos Of The 'Hocus Pocus' Cast Then & Now
By Radhika Menon
Get Even More From Bustle — Sign Up For The Newsletter