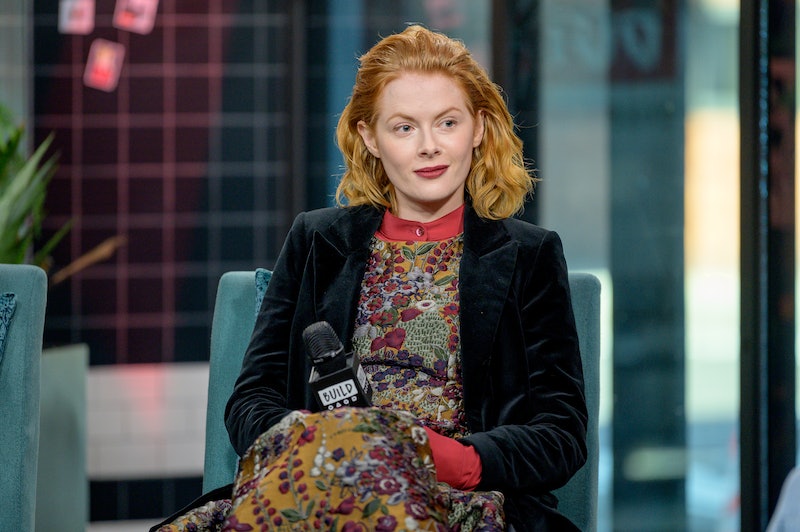 Most actors are familiar with improvisation. It can be a way of building a character, improving a script, and figuring out what people really do in different situations. But for Cruella and Little Joe actor Emily Beecham, these skills were put to the test off-screen last year, after she left the Cannes Film Festival only to be told to turn around and come back sharpish.

“I'd gone back home to the UK and I'd had a lie in after a really busy week at Cannes and then I turned on my phone and it was just bombarded with messages and the producer telling me to get to an airport immediately,’ she tells me as we meet at the BFI on Stephen Street in London’s West End. “It wasn’t until I was in the auditorium right before the ceremony began that a publicist whispered to me, ‘Oh, you're gonna win, so be prepared.’ I thought, oh f***!”

Softly spoken, charming and funny, it’s easy to see why Cannes voters fell in love with her. Scooping up the highly regarded Best Actress award for her performance in Little Joe, Beecham was so unprepared she found herself desperately trying to remember the names of the people who worked on the film. “I wrote a bunch of names on a scrap of paper and then thought, ‘I can't bring the scrap of paper on stage,’” she laughs.

It proved to be a life-changing moment. “[Winning the award] enabled me to meet really interesting filmmakers, read interesting scripts that it's quite tricky to get into the room for,” she says. “The more people get to know you and your work, the roles get bigger and more complex and there’s more responsibility which is nice. I'm reading things that I would genuinely watch, which hasn’t always been the case, and I feel very lucky.”

As a result, it’s been a hectic couple of years for Beecham. From kicking some serious tail as a martial artist in Into the Badlands, to an upcoming role opposite Emma Stone in the 101 Dalmations prequel, the 35-year-old has hardly had time to catch her breath. However, as someone who clearly thrives when she’s busy, Beecham doesn’t seem to mind.

Nearly a year after it debuted at Cannes, Little Joe is also set to make its UK cinema debut. In the sci-fi thriller that’ll leave you feeling anything but green-fingered, Beecham plays Alice, a hard-working scientist engineering a type of plant which has been specially modified to enhance the mood of anyone who smells it. However, when people in her lab start acting peculiarly, Alice begins to suspect that there's something darker to the “happy plant”, named Little Joe after her son, than meets the eye.

Eerie, spooky and aesthetically stunning, Little Joe is a fascinating and enthralling film that speaks to our anxieties about modern technology, and the dangers of tampering with nature. Directed by legendary director Jessica Hausner, Beecham stars opposite one of her acting heroes, Ben Whishaw, which was definitely one of those pinch me moments. “He’s such a lovely, modest, considerate, jolly person,” she says.

The cast spent time in laboratories getting up close and personal with plants to get into character. “We extracted DNA from a leaf,” Beecham laughs, when I ask her what they got up to on set. “There was all this equipment and these boxes that looked like these luminous violet LED lights and you put the DNA in there for a while and it's very interesting. But then at the end Ben and I'd be like, 'we haven't got a clue what we did, we just put them in some spinning machine with a pipette and out of these bizarre machines and we haven't got a freaking clue.'”

Beecham’s character, Alice, is a mother torn between work and parenting her teenage son Joe. For inspiration, the actress looked to real life scientist Emmanuelle Charpentier, who designed a revolutionary gene editing tool.

“She is a very petite woman who's very highly regarded and has massive responsibility and in interviews she talks about not having much time for her personal life or hobbies,” Beecham tells me. “She comes across quite shy but she's also quite firm in the workplace and almost a bit prickly sometimes. We really liked those qualities.”

For proof of Alice’s dedication to her job, you need look no further than her red bowl-style haircut. It’s a no-nonsense style for a woman who doesn’t spend time fussing with her appearance, and I originally thought it was a wig, but when I ask Beecham insists she relished the opportunity to go for something different.

“Jessica asked me when we first met if I’d be up for cutting it off and I said, ‘Yes, 100 percent,’” she says. In many ways, having a style rooted in practicality over being attractive was liberating.

“Hair is so associated with femininity and sexuality and I've gone through so many years of being prettied up that I was really up for that,’ Beecham says. ‘Tilda Swinton is a really good example of just metamorphosing into a part, even when she's playing a male character. She's super versatile so people don't focus on her sexuality. They just focus on her mind and her work and there's longevity to that.”

The last few years may have seen Beecham’s career ramp up, but the Manchester born actress has been in the biz for some time. She graduated drama school the same year as Fleabag super talent Phoebe Waller Bridge - “our ex boyfriends used to live together!” - and quickly went into roles in The Bill, Merlin and Silent Witness, telling me she’d gladly return to TV any day.

Next up is Cruella, the hotly anticipated prequel to 101 Dalmatians starring Emma Stone as a young Cruella de Vil living in London in the 1970s. Beecham’s role in the film is currently unknown - she’s pretty much sworn to secrecy on the whole thing - but says filming was a dream come true.

“It looks very beautiful,” she says. “The costumes are amazing, very Vivienne Westwood inspired, that London look. And the whole screen quality is quite dark and down. Craig Gillespie directed it who directed I, Tonya and Lars and the Real Girl, so I think he's brought quite an edginess to it.

“There's a real naturalness to the acting and he wanted us to improvise and make up new stuff. There's lots of kids, lots of animals and he's brilliant with the children. I think it will be very humorous.”

With Cruella set to tell the story of such an iconic Disney villain, I ask Beecham which cartoon baddie she’d most like to bring to life on screen. After weighing up Ursula from The Little Mermaid and Jafar from Aladdin, she settles on “the horrible warty wicked witch” from Snow White. Well, if anyone could rock it, she could.

Little Joe is in UK cinemas on February 21.