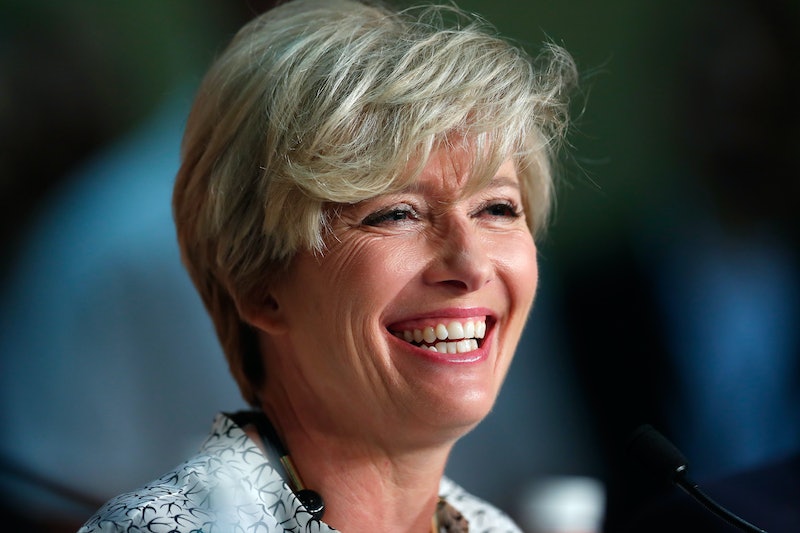 OMG did you know that a brand new live action origin story about Cruella de Vil was in the works? Me flipping neither but guys, this is the good news you needed to get through the week, am I right? Ugh the costumes. Just think of the costumes. Yes, we all know Cruella is a grade-a villain, but y'all, she can dress. And, if all that weren't enough, you may be about to die when you hear the reports from Variety that Emma Thompson is in early talks to star in Disney's Cruella.

I reached out to Thompson's reps for comment on this and will let you know of any updates as soon as I hear them.

The brand spanking new live action origin film is already set to star Emma Stone as a young de Vil, according to the Hollywood Reporter. It's a prequel to the incredible live action film starring Glenn Close back in 1996, and will show how she became one of the most loved villains of all. Although it's not been suggested who Thompson will play in the film, this could potentially be a great meeting of Emmas. Perhaps the best of all time. Emmaholics take note, it's about to be seriously lit.

Thompson is arguably one of our most beloved exports and has definitely risen to 'national treasure' levels of fame. She is so appreciated that she is in fact now a Dame. You probably know her best as Nanny McPhee, or for starring in umpteen Richard Curtis films and nearly never playing a baddie. Most recently, she flexed her comedy muscles as a host on SNL and even got stuck in IRL as a climate activist at the London Extinction Rebellion protests. Clearly she's one very busy movie star, guys.

The new Disney film will be all the background as to how she became a murderous fur fiend with a penchant for spots. The origin story, or dare I go wild and say prequel, is set in the '80s. Ugh, even more scope for incredible costumes. Anyhow, according to The Hollywood Reporter, it is said to have a real punk feel to it, which again bodes well for the wardrobe department on this film.

Disney has been absolutely killing it of late with live action films. Other Disney baddies have been given their own films, like Malificent. However recently, the Disney princesses have been getting all the hype. Another famous Emma (Watson) starred in their Beauty And The Beast and Lily James starred in Cinderella. However it is their latest release which is the hot topic on everyone's lips. The new live action Aladdin is starring Naomi Scott as Princess Jasmine. Not only does it have an amazing cast, the soundtrack is off the chain and features the dulcet tones of the UK's own Zayn Malik. Swoonage.

Cruella will be released on Dec. 23, 2020. Boo hiss, I know. So long to wait. However, it looks like this is one wait that will be entirely worth it.