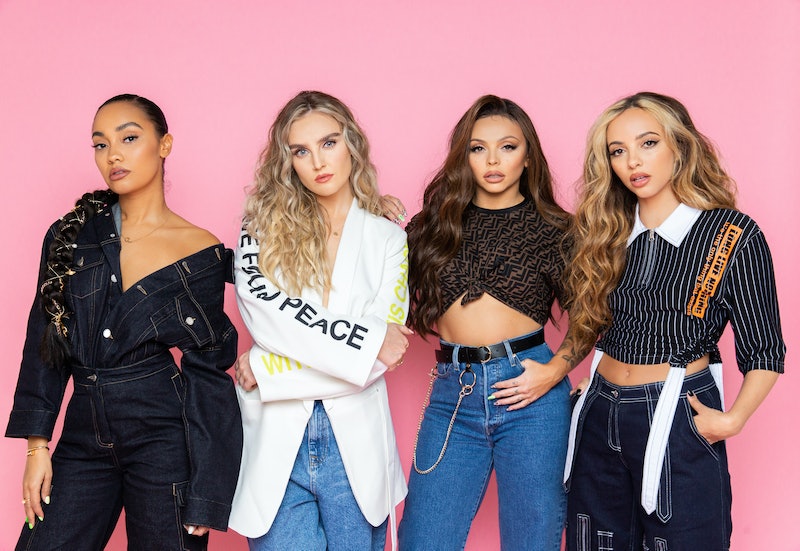 "After our second album, we started writing the third and then it wasn’t going right — it was just not good enough,” says Leigh-Anne Pinnock, reflecting on the time between 2013’s Salute and 2015’s Get Weird. “It didn’t go together. It wasn’t what we wanted and then we had to scrap it all. At that moment, we actually thought that we were going to get dropped. We didn’t think that we were going to keep going. It was horrible. It was a horrible feeling. But then we got ‘Black Magic.’ That was the turning point. It saved our career.”

It’s not often you hear an artist speak so openly about the moment they thought they were going to get dropped, but Little Mix have always shown a unique capacity for opening up about the challenges in their lives, from mental health battles to breakups and everything in between. Perhaps it’s a product of their very public rise to fame, which saw them assembled by musical Svengali Simon Cowell on the 2011 edition of The X Factor, which they went on to win (the first ever girl band to do so). But don’t give the show too much credit; their success is part of a hard-won battle for agency on the part of four young women.

“I feel like we’ve realised that we’re at our most authentic and probably our most successful when it comes from us,” says Jade Thirlwall. “I think one of the things that I’ve really learned is everyone’s just fucking blagging it.” They may sound self-assured now, but it was a challenge to get to that point. “When you’re 18 and you’re sat there in an office and some old bloke is going, ‘you should dress like this’ and ‘you should wear that’ and ‘you should do this music’ and blah blah blah... At the time you’re like, ‘Yeah alright’ and now I just think NO!” Jesy Nelson adds: “We were so scared of pissing people off [and] that it would affect our career, whereas now we couldn’t give a shit.”

Trusting their gut is a method that’s worked for the band — since then, they have racked up five number one records, a number one album, and two BRIT Awards. Most striking is that the band have weathered failings that have been enough to dethrone many another band. “I think we’re really respectful of each other, which goes a long way,” says Jesy Nelson. “We bring each other up a lot. And yeah, we do have times when we really fucking piss each other off but we know when we’ve done that, we know when to say sorry. It’s real friendship.”

It’s this friendship that’s been vital in sustaining them through the onslaught of commentary and criticism that comes with a life in the public eye. “When I did X Factor, I didn’t really have any insecurities about the way I looked,” says Thirlwall. “It wasn’t until after, when I saw horrible comments and things like that, that I started getting a complex about my nose and double chin and all this stuff.” Handling the comments can be tough. “You’re human — I would give anything to be able to switch it off,” says Perrie Edwards. “When you see people who are just so carefree, [who] don’t generally give a shit, it must just be the best feeling.”

“I think it’s a lot of pressure to love yourself,” adds Nelson. “You know when people go, ‘you can’t love anyone else if you don’t love yourself.’ Sometimes I think you need people to love you to make you love yourself.” What’s clear is the band have now reached a point where they have confidence in their decisions. “We’ve definitely come a long way and it’s taken nearly eight years, but I think we finally got to that place where we, like, really know what the tea is,” says Thirlwall. With that in mind, Bustle asked the band to get creative and write letters to their younger selves on the night of The X Factor final.

More like this
Beyoncé Might Be Plotting Secret Intimate Gigs In The UK
By El Hunt
60 Empowering 'Renaissance' Lyrics That Make Perfect Instagram Captions
By Catharina Cheung
The Controversy Around Beyoncé's “ENERGY”, Explained
By Frances Stewart
The Beyhive Is Buzzing About Beyoncé’s 'Renaissance' Album
By Sam Ramsden
Get The Very Best Of Bustle/UK