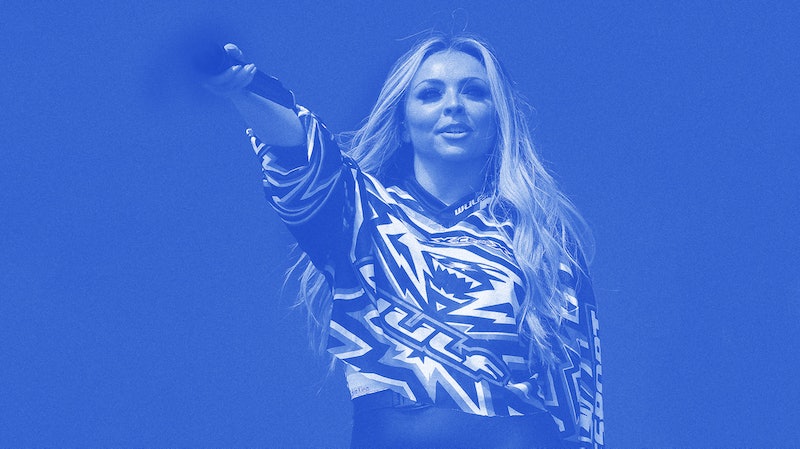 It’s been eight years since Little Mix broke the curse of the girl groups to win the biggest prize on TV: The X Factor. Since then, the foursome have won two BRIT awards, scored a number one album, and seen four of their impeccably catchy singles hit the top spot. Ahead of the release of their new single, the effervescent summer banger "Bounce Back," Bustle UK chatted to Little Mix about the night that changed it all. Keep reading to see read the advice Jesy Nelson would give her 20-year-old self.

I know you’re nervous. So nervous you can’t even concentrate. There’s no time to focus on anything but performing. You’ve got that 2% doubt this isn’t going to work, but you can do this. Even if everyone is underestimating you. Remember when you were watching X Factor on the telly back when you were a barmaid, thinking “I can do that?” You envisioned yourself being on that stage and you made it happen.

You can do so much, especially with your girls. Doing it on your own would be awful. You’ll become so close, really close, and you’re only going to get closer. A lot of things are going to change in the next eight years, but these girls won’t. Continue to be really respectful of each other — it goes a long way. You know who shines at what, so bring that out of each other. And yes, you will have times when you fucking piss each other off, but you’ll know when you’ve done that and know when to say sorry. This is real friendship. Just get in your little huddle backstage, tell each other you love each other, and that you're going to smash it.

I know you’re scared of pissing people off right now. Terrified that any little thing you do that people don’t like will get you kicked off the show. By not speaking up you’ll look back and realise there’s not one outfit you enjoyed wearing on the show. But people are always going to tell you what you should and shouldn’t do. Even after X Factor, some old bloke in an office will tell you “dress like this” and “you should wear that.” People will tell you things like you shouldn’t have input on your videos. Let me save you some pain, time, and effort: Don’t give a shit. Be authentic and stick true to yourself. The videos you do have input on will go down the best, so stand your ground like a boss. You’ll come to intimidate a lot of men in the office. When you say your opinion, they’ll actually listen.

Make sure you thank Tulisa, too. Honestly, without her, I don’t think you would have won. She pushed for you when the producers said, “What’s the point of putting a girl band through? They never win, it’s a waste of time.” She convinced them. She is all about female empowerment and so are you.

Winning will be one of the best things to ever happen to you. You’re not going to have a bloody clue how the industry works, but you will learn. You’ll feel pressure to be a “role model,” even though it’s a label you didn’t ask for. Sometimes it will feel like you’re caged, but ultimately, you’re normal girls, being yourselves and doing what you want. If someone doesn’t class that as being a role model, that’s on them.

You’ll go through a lot of shit, and you won’t believe how mentally strong you are. There aren’t a lot of people who could deal with some of the stuff you’ll have to deal with, especially with people on social media. I won’t lie and say it gets easier. Mean comments always hurt and even when you say you don’t care, you really do. There’s a lot of pressure to love yourself and there shouldn’t be. You’re always going to have things about yourself you hate, but it’s about learning to deal with them and learning that it’s normal. So don’t let anyone, ever, bring you down. Just do you.