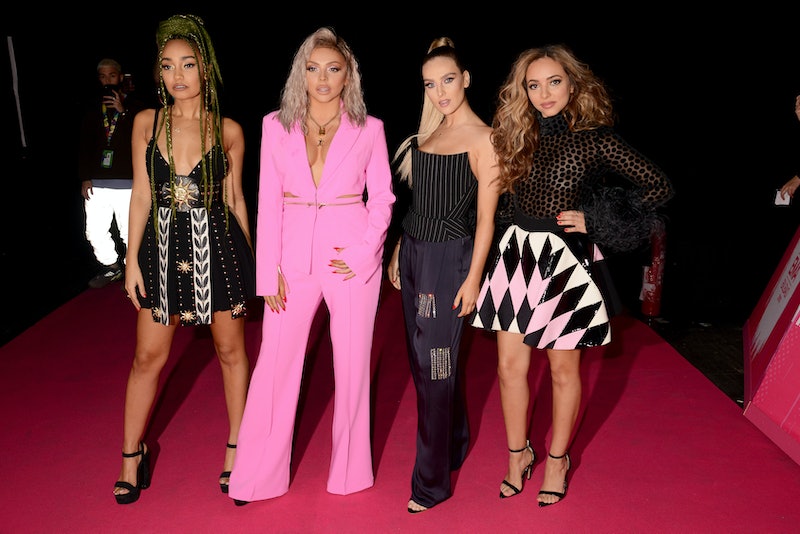 Ever since Little Mix were the first group to win the X Factor back in 2011, they've pretty much been one of the UK's proudest exports. They're usually honoured as such at the BRITs, and at the 2019 ceremony, they've showcased just what makes them so good. Showing up in typically eye-catching outfits, they further dazzled during a performance at the awards, as they teamed up with up-and-coming rapper Ms Banks. Whether you missed the live performance, or just want to watch it over and over, here's the gifs and video of Little Mix's BRITs 2019 performance, so you can get your life again.

Little Mix and Ms Banks certainly lifted each other up at the BRITs on Wednesday, Feb. 20. It's another incredible performance, filled with contagious femme power to add to both of their long and growing lists of incredible performances. Even though it was Little Mix's debut alongside Ms Banks, in the run up to the night, you couldn't tell. The group absolutely slayed, and Ms Banks' crocodile print jumpsuit was just another highlight.

"We haven’t started rehearsals," Banks told Metro.co.uk on Wednesday, Feb. 13, a week ahead of the BRITS, "but it will be a breeze we’ll just rehearse all day!" Little Mix announced their performance at 2019's BRITs, on Jan. 19, when the official BRITs Twitter posted a video of them declaring in unison: "We're performing at the BRITs 2019!" Needless to say, their fans went into overdrive.

While it was initially expected that the group would collaborate with Nicki Minaj for their BRITs performance, following their 2018 single together "Woman Like Me," Miss Banks was sworn in instead, and I'm super glad for it. She came recommended by DJ Semtex, who hosts the popular Spotify podcast Who We Be Talks, as Banks told Metro.co.uk.

It'll be the group's first time performing at the BRITs in two years, following their knockout performance of their hit "Shout Out To My Ex," which went onto win the award for best British single at the 2017 ceremony. They made their debut live appearance at the awards the previous year, which saw them bringing their breakthrough single "Black Magic" to life in a similarly spectacular display.

At the 2019 Brits, Little Mix were nominated for best British group alongside The 1975, Arctic Monkeys, Gorillaz, and Years & Years — making them a standout in a lad-heavy category. Their single alongside Nicki Minaj was also in contention for British video of the year, while they were up against the likes of Dua Lipa's "IDGAF" and Anne-Marie's "2002" with voters at home deciding who gets to take home the award.

Prior to the 2019 event, Little Mix have only ever taken home one BRIT award, despite receiving nine in total across their career. But these ladies don't need any further validation — although some more BRITs would be nice. With their latest performance at the awards, they've proven once again that they're some of the best musical talent that Britain has to offer.