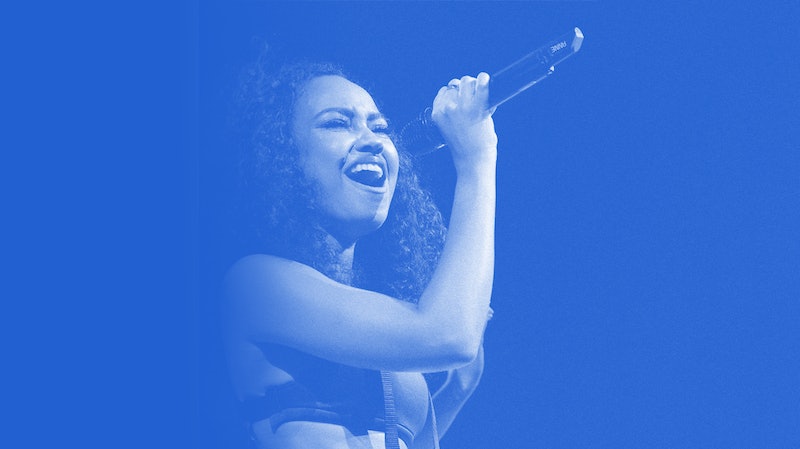 It’s eight years since Little Mix broke the curse of the girl groups to win the biggest prize on TV: The X Factor. Since then, the foursome have won two BRIT awards, scored a number one album, and seen four of their impeccably catchy singles hit the top spot. Ahead of the release of their new single, the effervescent summer banger "Bounce Back," Bustle UK chatted to Little Mix about the night that changed it all. Keep reading to discover Leigh-Anne's letter to her 20-year-old self.

Right now you’re sat there thinking "Oh, my God, this could go the other way.” You think it’s 50:50. You’re at the last hurdle, and scared that all that hard work could be for nothing. It’s a weird feeling. All you’ve ever done is sing, right from school. There was no other way for you, nothing else in the stars, but sometimes you’ll wonder what it would’ve been like if you’d gone to university instead. This will all happen so fast, but rest assured it’s worth it.

I think back to that time and realise we were all so naive. We were babies. You don’t have a clue what is going to happen. Remember that time you were at the X Factor house and went outside to meet the fans, and nobody wanted to see you or wanted your autographs? That’s all about to change. After winning, your manager will come and whisk you away when you’ve only seen your family for five minutes. You should have stood your ground a lot more back then, especially over what you wore — some of those outfits were awful, but you’ll just do it.

Don’t be too hard on yourself. You have to put your trust in someone. These people have got so much experience, how can you not put your trust into them? Your lives are in other people’s hands, and the crazy thing is, often the decisions people make for you won’t really work. People will say stuff to you that you now know is totally wrong, like saying you can’t be in writing sessions because artists can’t write. Ignore it and trust yourself.

So much shit will happen to you — stuff that’s off camera, and nobody knows about. It won’t always be easy. After the second album, you’ll start writing the third and it won’t feel right. It’s just not good enough. It doesn’t go together. It’s not what you want and you’ll scrap it all. In that moment, you’ll fear that you’re going to get dropped, that you won’t be able to keep going. It’s a horrible feeling, but then you’ll find Black Magic. That will be the turning point that saves your career.

Over time, you’ll realise that everyone is just blagging it. It will be such a hard journey, getting to the point that you don’t care what people say online, but you’ll all get better at it. And through it all you’ll have your girls. You’ll stick together, right from that first trip to Camden before judge’s houses, where you bought all those matching t-shirts and stripy socks. Right now, nobody can tell you nothing. Keep supporting each other — that will keep you united. And if in doubt, just do you and sod what everyone else thinks. Just do you.