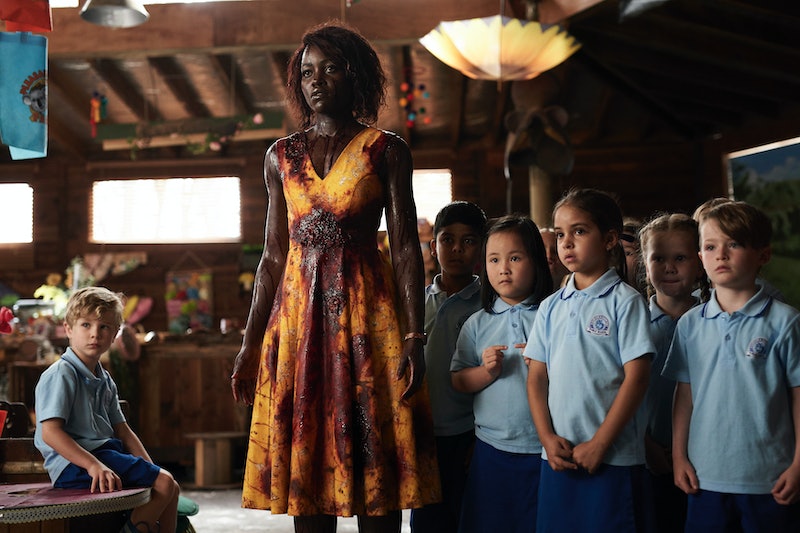 Hulu's new original film Little Monsters is about Dave (Alexander England), a white man-child who is forced to grow up when his nephew's kindergarten class field trip is overrun by zombies. With that synopsis, it's not exactly an obvious rebuke to Donald Trump. And yet, the president is exactly why producer Jess Calder got involved in the project. As she tells Bustle, Little Monsters is an unapologetically optimistic zombie movie, and its focus on empathy just might be what audiences need in this time of political turmoil.

For a zombie movie, Little Monsters has a shockingly small amount of death. Unlike other movies and TV shows in the genre, it isn't about killing zombies to survive, but protecting children from the horror itself so that they can not only live, but remain trauma-free. "It's about how do we protect our children and future and innocence," Calder explains.

While this spotlight on positivity might sound trite, it's exactly the kind of message Calder, who got her start producing action fantasy films like Bunraku (2010) and thrillers like You're Next (2011), sees as crucial in the time of Trump. The producer describes the 2016 election as a turning point in her career and admits that, since Trump's presidency began, she has made an effort to support films that "encourage everybody to think about the importance of empathy."

Little Monsters achieves this goal mostly through the character of Miss Caroline, the kindergarten teacher played by Lupita Nyong'o. Miss Caroline is a bright light in the film, who approaches herding a dozen six-year-olds through a zombie attack with practicality and unwavering optimism — in distinct contrast to many other zombie movie heroes. Her positive attitude is in direct defiance of the horror movie trend to, as Calder puts it, "wallow in... the worst of humanity."

Instead of employing the zombie trope to explore humanity's ills, Little Monsters uses the undead to emphasize that there can still be hope for the future, even when surrounded by flesh eating monsters. "All of us can step up and do better for the sake of these kids and for future generations," Calder says.

For the producer, part of stepping up for future generations is ensuring that the stories told reflect the whole world and making films featuring actors who break the norm of the white Hollywood star. "If there was a theme across all of the movies that I've made since [the election] it really is just about empathy and about trying to encourage that... and to say, 'Look at somebody differently, even if it's just for a moment.'" she says.

Calder's last two films — last year's indie hit Blindspotting and Little Monsters — have been centered around the stories of people of color, and that's no accident. "It's 100% a goal of mine to try to make sure that the films we make more accurately represent the world we live in," Calder, who is Asian American, tells Bustle. For Little Monsters, that meant taking the role of a singing teacher and offering a new way of looking at it. "That kind of role... when you read it on page, you think, 'Oh, it's a good Julie Andrews,'" Calder reasons. "So how amazing would it be if you can change that perception... and change the idea of what that should look like and what that should be?"

Little Monsters challenges the zombie movie tradition and the Hollywood standard of who typically stars, all while providing timely political commentary and leaving audiences hopeful in an age of non-stop depressing news. It's no small goal, but it's one that Calder is determined to achieve.

"The wonderful thing about... the country, as a daughter of an immigrant, is the ability to know that things can get better if you put in the work," Calder says. "And if you never stop trying and never stop fighting for it to be better."