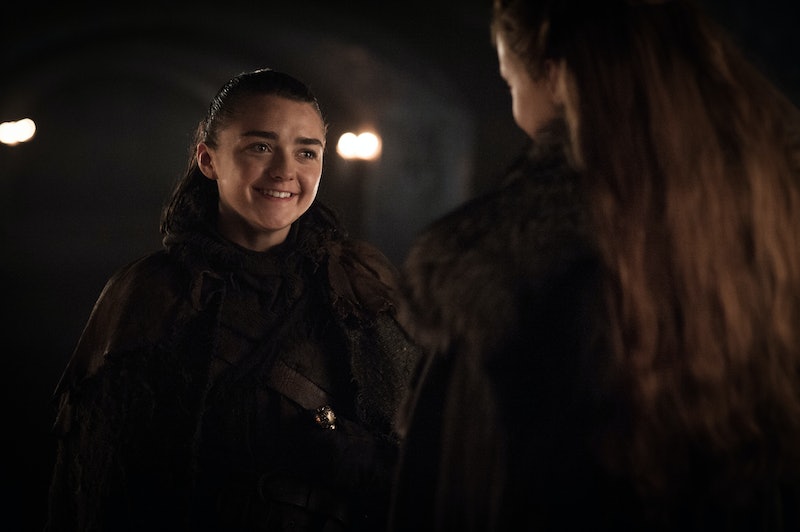 Sunday's episode of Game of Thrones, “Eastwatch,” was joyful in lots of ways: Jon Snow stroked a dragon; Sam left the Citadel of eternal boredom; and Dany and Jorah Mormont reunited, if only briefly. But Littlefinger's plan to drift a rift between Sansa and Arya on Game of Thrones left a sour taste in viewers’ mouths, given how quickly it followed the long-separated sisters reuniting. However, Littlefinger didn’t just plant the scroll that Sansa had written under duress while living with the Lannisters so he could make her seem untrustworthy. Of all the reasons for why he might want to come between them, the one that seems most likely to me is that he sees their solidarity as a threat. And he would be right to think so. Arya and Sansa's alliance makes them a force to be reckoned with, and, at least on paper, they have all the traits they need to withstand Littlefinger's scheming.

Together, Arya and Sansa embody one of the different two ways that women in George R.R. Martin's world can survive: via brute strength and violence, like Arya (who is similar to Brienne of Tarth in this respect) or via intellect, scheming and intrigue, like Sansa (who in many ways, is like a more moral version of Cersei). Each of the sisters has what the other lacks.

As we saw from Ramsay Bolton's unhappy end, Sansa is great at scheming up a violent death for her enemies — but only if she's not the one forced to commit the act of brutality. Throughout the show, we've been led to see her as physically weaker than most of the other characters — for example, when even her slender aunt Lysa almost throws her to her death through the Moon Door. Unlike her younger sister, she seemingly lacks the muscle to defend herself.

Arya also has an Achilles' heel. As we saw with her angry encounter with Brienne, which leads to the Hound almost dying in his attempt to defend her, she's too hotheaded and lacks the ability to think in terms of long-term consequences. But, as we know from Sansa's calculations about the amount of food for the troops at Winterfell, her older sister possesses exactly this quality in abundance. At least on paper, the two sisters would complete each other in terms of survival skills and working together would make them extremely hard to manipulate or hurt.

On top of that, in general, women in positions of power in Westeros tend to be the fiercest. The world sketched out for viewers is a hard place for women to survive in; all the non-violent women we've seen onscreen have all met grisly ends (see: Margaery Tyrell, Talisa Stark, and Myrcella Baratheon). One argument could be that the reason that almost every major military leader on the show right now is female is because women have twice as much more motivation to conquer the world. And it's not about grabbing power, or at least not entirely. It's about placing themselves in a position in which they're safe.

We've seen this over and over again with Cersei, who went to insane lengths to protect herself from a witch's prophecy that she would only hold the throne for a time and would ultimately be cast down, but we can also see this in other examples. Both Dany and Sansa, after all, are sexual assault survivors who became markedly more brutal following their attacks. Ultimately, women on the show are learning the skills they need to protect themselves, be that thinking ahead of the enemy or cutting their head off.

We got a brief glimpse of how effective the women of this world could be when working together before Euron burned the ships and viewers' dreams with them. Dany managed to create an alliance between Olenna Tyrell, the Sand Snakes, and Yara Greyjoy, and it was joyful while it lasted. Instead of threats and murder, we got flirting and Tyrell dishing out some measured advice to the woman she didn't agree with. Clashing viewpoints were settled via words, not swords. The swords were saved for their enemies.

Given that half of the above characters are dead, this coalition is no longer a threat. But Arya and Sansa shouldn't be underestimated in how much they can accomplish if they team up. Time and again, they’ve proven themselves to be the equal of anyone who’s faced up to them. With Sansa’s understanding of politics and manipulation and Arya’s hot temper and violence in response to anyone who crosses her family, Littlefinger might not find it so easy to sow mistrust between them. After all, these are two women in Westeros with very little to lose and every reason to keep their eyes on him.