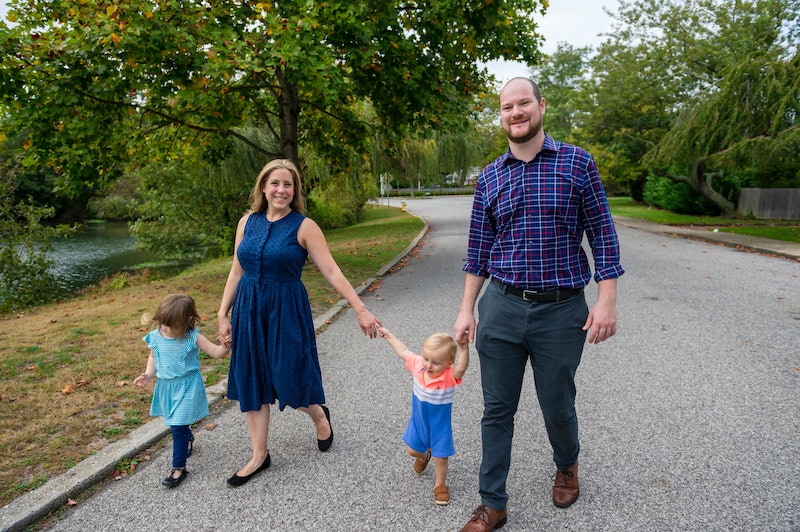 In the early days of her congressional campaign, Liuba Grechen Shirley would call potential donors while her son nursed and her daughter stayed occupied by playing with her mom's hair. She describes the last few months of 2017 as "an interesting juggling act" in which she tried to raise $100,000 to launch a serious political campaign without child care.

"There’s a reason that more than half of representatives [in Congress] are millionaires," Grechen Shirley tells Bustle. "It's very hard to run for office if you’re not independently wealthy — you take a year to a year and a half off your life without a salary."

"Our babysitter is just as integral to our team as my campaign manager, as my finance director."

Federal law dictates that political candidates can use campaign funds for "authorized expenditures in connection with the campaign," but not for "personal use." Child care isn't explicitly classified in either category and must be considered on a case-by-case basis.

Grechen Shirley asked the FEC to officially declare child care a campaign expense going forward. She doesn't just want to change FEC rules to make her own life easier, though. She believes the cost of child care needs to be factored into campaigning in order for more women to successfully run for office.

In March, she hired a part-time babysitter to watch her kids in the mornings. That costs about $400 per week that she's paying out of campaign funds. The babysitter is on the campaign payroll and has a timesheet like other staffers.

Paying her babysitter with campaign funds is currently a grey area, but Gretchen Shirley will have to start paying for child care out of pocket if the FEC denies her request. The agency told Newsday in early April that it would decide on her case within 60 days.

"It's a matter of, do I use these campaign funds to buy more lawn signs, or do I use them to pay for child care?" Grechen Shirley says. "Our babysitter is just as integral to our team as my campaign manager, as my finance director."

Clinton formally backed Grechen Shirley's FEC request over the weekend, arguing in a letter written by her attorney that child care doesn't qualify as a "personal use." Clinton attorney Marc Elias said in the letter that "denying Ms. Shirley’s request would undermine the Commission’s previous advisory opinions, discourage young mothers from seeking elective office, and deprive parents of ordinary means of the opportunity to serve."

Women currently make up less than 20 percent of Congress, and only a handful of the 106 women serving on Capitol Hill have young children. As of 2017, the average age of both male and female representatives was 58 in the House and 62 in the Senate. When Sen. Tammy Duckworth became the first senator to ever give birth while in office last month, the Senate had to update its policies in order for her to bring her newborn daughter onto the floor for a vote.

Grechen Shirley wants to see more young moms serving in Congress to ensure that the people writing the nation's laws understand what day-to-day life is like for the average American. If more moms represented voters in Washington, she believes America wouldn't be the only developed nation without guaranteed paid family leave; public schools would be better funded; and universal health care would be implemented.

But in order for more moms to run for office — and win — Grechen Shirley and Clinton agree that child care must be classified as a legitimate campaign expense. A 2008 Brookings Institute study found that when women's responsibilities for household tasks decrease, their interest in running for office increases. Forty percent of women surveyed who were responsible for the majority of household tasks said they had considered running for office, while 46 percent of women whose partner was responsible for the majority of household labor said they considered running.

"For many women in the pool of eligible candidates, entering the electoral arena would simply be a third job, which is quite unappealing since they already have two," the study reads.

The FEC approving the use of campaign funds for child care would be just a first step toward making it easier for women to run for and hold office, Grechen Shirley cautions. If she's elected, she wants to follow in Duckworth's footsteps by working to make Congress more family-friendly. She also vows to champion paid family leave and universal preschool or all Americans.

Although other barriers for women who want to run for office will remain, the congressional candidate is confident that updating the FEC's campaign funding policy would go a long way toward currently hindering female candidates.

"If this is approved, it will be a game changer," Grechen Shirley says. "It will open the doors for parents, for people who are not independently wealthy, to run. It will change the way people get involved in government in this country."