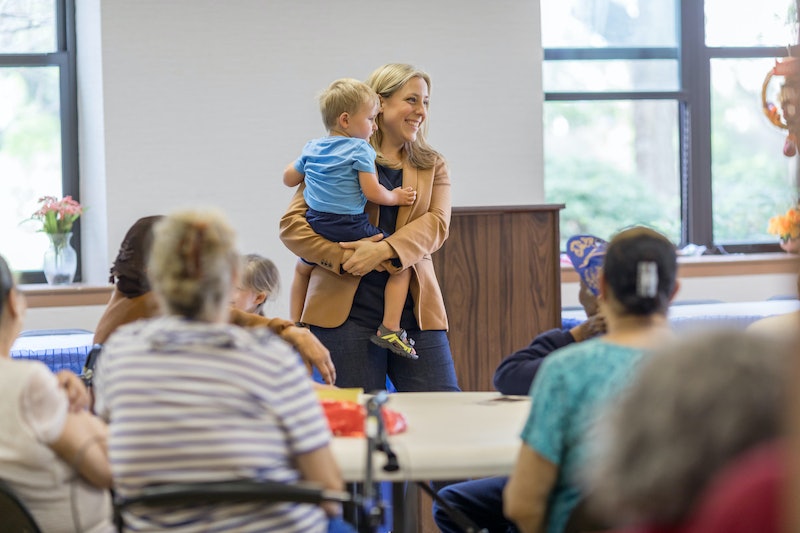 As hard as it can be to run for office as a woman, it's often even harder for mothers. Liuba Grechen Shirley hopes to address that problem with the new political action committee she formed in the wake of her groundbreaking, though unsuccessful, campaign for Congress. On Wednesday, Grechen Shirley launched Vote Mama, a PAC aimed at supporting mothers running for office that plans to provide money and mentorship for Democratic candidates across the country.

While running for Congress in the midterm election, Grechen Shirley didn't shy away from openly talking about the difficulties of juggling her kids and her career — and that hasn't changed. "Hold on, I have a baby literally bouncing on me," she tells Bustle while explaining the need for more mothers in Congress in a Wednesday phone call.

Grechen Shirley ran in New York's 2nd Congressional District last year, opposing Republican incumbent Rep. Peter King despite her supposed low odds of victory. She won her primary before losing to King by around six points. First, though, she broke down a major barrier for women candidates by successfully petitioning the Federal Election Commission for approval to spend campaign money on child care.

"The way that our government is set up is typically geared towards getting older, independently wealthy men in office," Grechen Shirley tells Bustle.

A press release announcing Vote Mama's launch pointed out that moms of young kids tend to have a much harder time running for office than others. In fact, according to the PAC, none of the seven mothers who ran for Congress with kids under 3 won their midterm races.

The hardest part is often raising the money, Grechen Shirley explains. It's not only difficult to find time to fundraise while taking care of kids, she says, but: "When you have young children, donors don't take you seriously. They don't think you have the time to dedicate, they don't consider you a good investment."

That's precisely why she launched Vote Mama. To receive an endorsement from the group, a candidate must be a Democratic mother, pro-choice, and in favor of universal pre-kindergarten and paid family leave. These are the most important qualifications, but Grechen Shirley explains that candidates should also be more broadly determined to "fight for the issues that are affecting working families all across this country," including "common sense gun reform" and universal health care.

Her new PAC will support candidates at all levels of government, with the exception of those running for president, and all endorsement decisions will be made through an interview process. Once a woman candidate gets Vote Mama's backing, she'll receive both financial support and mentorship from a team of past and present moms in office, including five current members of the U.S. House of Representatives.

While it's important to have both mothers and fathers in Congress, Grechen Shirley argues that mothers' voices are the ones currently missing. Vote Mama data shows that over 100 current congressmen — but only 25 congresswomen — have kids aged 18 and below. That means just 5 percent of Congress is made up of moms with young children.

"We need moms in office who understand, at a visceral level, what it's like not to have access to paid family leave," Grechen Shirley tells Bustle. "We need moms who understand how hard it is to find quality, affordable child care."

The issue of childcare hits close to home for Grechen Shirley, who didn't have a babysitter for the first several months of her congressional campaign. "I was still nursing when I launched my campaign," she says. "The day my campaign manager started was the day I got home from the hospital with my son, who broke his leg... We were juggling fundraising with a baby in a body cast and a toddler running around."

She pauses for a moment to ask her son to be quiet, then resumes our conversation. "This is literally why I started this organization."