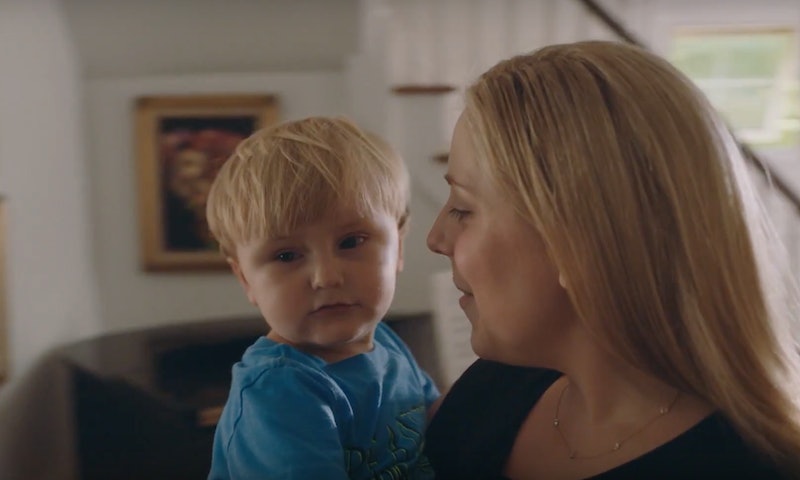 The New York Democrat who successfully petitioned for the ability to pay her babysitter with campaign funds earlier this year is keeping her kids front and center. Carrying on the momentum of her primary victory in June, Liuba Grechen Shirley's first campaign ad highlights the fact that she's running for Congress with two toddlers — she's the only female congressional candidate to do so this election cycle.

"I was told that with two kids, a husband who worked full time, and no child care, that it was impossible," Grechen Shirley says in her first paid online ad released Wednesday morning. "Well, it wasn't impossible. It's just really hard."

The 36-year-old Democrat is vying to oust Republican Rep. Peter King, who's represented New York in the U.S. House since Grechen Shirley was a pre-teen. The FEC ruled unanimously in May to approve her request to pay for child care with campaign money, opening up that possibility for other candidates as well. She told reporters at the time that she hopes the decision "ushers in a new era of female candidates" who aren't held back by child care expenses.

Her first campaign ad, titled "Personal," was produced by the same people behind the viral video that catapaulted Randy "IronStache" Bryce's bid to unseat House Speaker Paul Ryan into the national spotlight. It shows Grechen Shirley holding her son while making calls and meeting with her campaign staff at her kitchen table — a feat of multitasking familiar to many mothers.

Grechen Shirley had hired a part-time babysitter earlier this year at a rate of $400 per week to watch her kids in the mornings. The babysitter is paid with campaign funds, which wasn't entirely legal until the FEC officially ruled on her petition later that month. She told Bustle in May that her babysitter "is just as integral" to her campaign as any other staffer, and that the ability to pay the babysitter as such would make running for office less of a financial burden for the average American.

"There’s a reason that more than half of representatives [in Congress] are millionaires," she told Bustle at the time. "It's very hard to run for office if you’re not independently wealthy — you take a year to a year and a half off your life without a salary."

Her new campaign ad puts her kids at the forefront of her campaign once again. While most political candidates only bring out young children for the occasional photo op or family-friendly event, women are changing the narrative around running for office a parent; in at least two campaign ads released this election cycle, women are shown breastfeeding their children.

This shift in how campaigns embrace a candidate's role as a parent is inextricably linked to the historic number of women running for office this year. And Grechen Shirley hopes bringing children — and the child care needs that inevitably come with them — into discussion around campaigning will pave the way for Congress to better reflect what America actually looks like.

"The FEC ruling will change the landscape of candidates that we see running. It will break down barriers, and allow the average, every-day American to run for office," she says in her new ad. "And if you had more working people in office, we would have representatives prioritize working Americans."

More like this
A Political Thriller Inspired By The Munich Massacre Is Coming Soon
By Darshita Goyal
Why Eurovision 2023's Host City Won’t Be Revealed For A While Yet
By Sam Ramsden and Rachel Mantock
Are John Legend & Kanye West Still Friends? The Singer’s Latest Update Is Candid
By Brad Witter
Pete Davidson Runs To Shower With Kim K In 'The Kardashians' Season 2 Trailer
By Jake Viswanath
Get Even More From Bustle — Sign Up For The Newsletter

This article was originally published on Aug. 14, 2018