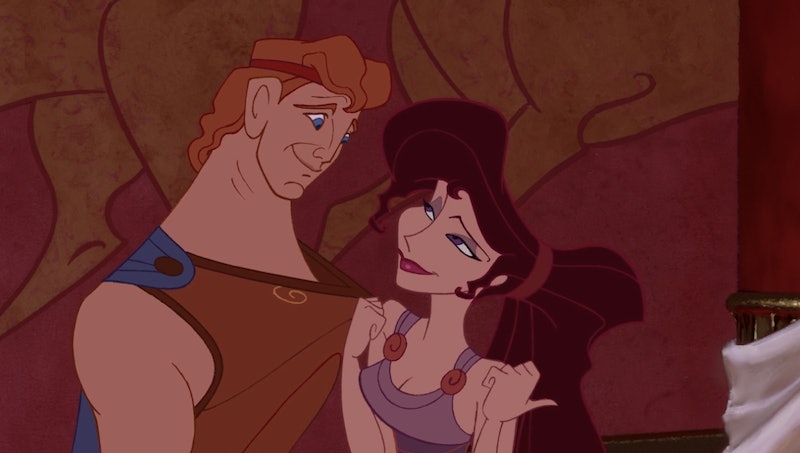 Dreams of Ariana Grande playing Hercules' Megara might finally come true. Thanks to an April 30 report from The DisInsider, there are live-action Hercules rumors floating around. Now fans can't help but try to predict the cast and, yes, Grande is at the top of the list.

The report suggested that the potential live-action film will be a theatrical release versus a Disney+ original, and that both new songs and favorites from the 1997 animated movie will be featured. The fan site also reported that The Lion King's Jeffrey Silver and Karen Gilchrist are set to produce, and that Disney veterans Jon Favreau (live-action Lion King and Jungle Book), Joe and Anthony Russo (Avengers: Endgame), and Gore Verbinski (Pirates of the Caribbean franchise) are being discussed as possible directors. To be clear, nothing has been confirmed and this information is strictly rumors right now. But, of course, that hasn't stopped the Internet from speaking their minds.

From Aladdin, to The Lion King, to Beauty and the Beast, to Maleficent, Lady and the Tramp, and the upcoming Mulan, fans have already seen several of their animated favorites turned into live-action films. There's even a Lilo & Stitch live-action in the works, and same with a live-action The Little Mermaid. So, it would only make sense for Disney to do a live-action Hercules. And, if they do, maybe they'll take a look at the fancasting happening on Twitter for some inspiration.

Ever since Ariana Grande sang "I Won't Say I'm In Love" during ABC's Disney Family Singalong, her fans have been praying she'll one day play Meg on the big screen.

Clearly, Broadway star Jelani Alladin has the talent and the resume to play Hercules. He already knows how to slay "Go the Distance," after having played Hercules in the limited-run production of Disney's Hercules in Central Park, and he even originated the role of Kristoff in Frozen on Broadway.

There are so many wonderful options of who could play Hades, but Benedict Cumberbatch's name has been thrown around a lot (even before DisInsider's report), along with Tom Hiddleston, Jim Carrey, and Idris Elba.

Danny DeVito voiced Phil in the animated movie, so it would only be right for him to reprise his role.

This hopeful casting was shared before DisInsider's report, but it makes sense. Josh Gad is no stranger to playing roles in Disney movies (Olaf in Frozen and LeFou in BATB), so he would definitely do the role of Pain justice.

Comedian John Mulaney would certainly bring comedy gold to the role of Panic.

Well, this is pretty much a given. Plus, Chris Hemsworth has already played the god of thunder, so why not also Zeus, the king of the Greek gods?

Amber Riley As One Of The Muses

Finally, there are the Muses. So far, many are wishing and hoping for Glee's Amber Riley to play one of them. She certainly has the talent.

If the live-action Hercules does happen, Disney can thank fans for already providing a list of potential stars for the cast.

More like this
The 'Scream 6' Trailer Shows Off Hayden Panettiere's Return & Ghostface In NYC
By Jack Irvin and Jake Viswanath
At 28, Rosie Perez Risked Her Career To Stop Playing Stereotypes
By Gabrielle Bondi
12 Years Ago, Austin Butler Manifested His Oscar Nom In This Disney Movie Scene
By Jake Viswanath
Sandra Bullock’s Razzies Speech Proves She’s The Ultimate Miss Congeniality
By Sam Ramsden
Get Even More From Bustle — Sign Up For The Newsletter
From hair trends to relationship advice, our daily newsletter has everything you need to sound like a person who’s on TikTok, even if you aren’t.