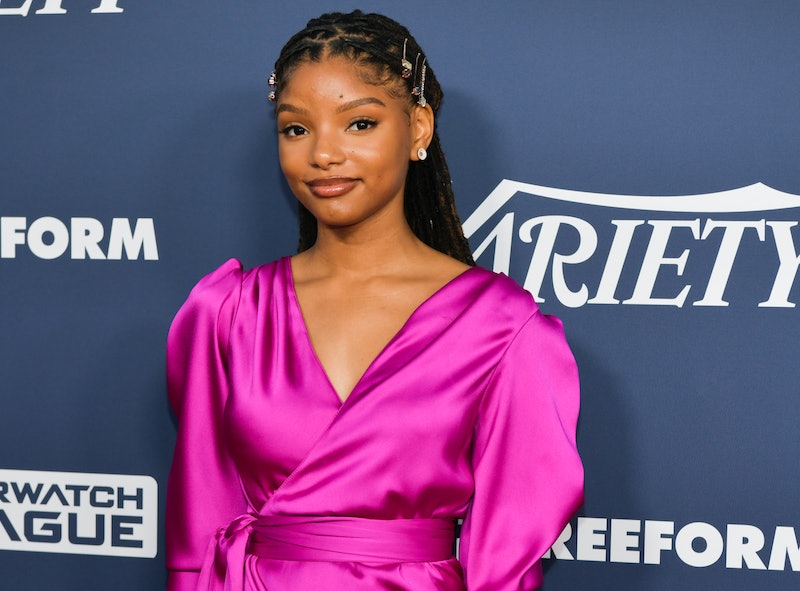 On Nov. 5, ABC will air its musical special The Little Mermaid Live!, starring Auli'i Cravalho, Queen Latifah, Shaggy, and John Stamos, among others. But it's not the only Little Mermaid project slated to hit screens: Disney's live-action film adaptation is currently in production, with a release date yet to be announced. The live-action Little Mermaid cast is completely separate from ABC's live version, but the two casts do have at least one thing in common: they're notably more diverse than their animated 1989 predecessor. The live-action take also a similarly impressive slate of singers and actors ready to bring the magical tale back to life. Here's who's been announced so far.

Halle Bailey, half of the R&B duo Chloe x Halle, will play Ariel in the new film. Outside of her music career, she's best known for playing the role of Skylar "Sky" Forster in Grown-ish alongside her sister and musical partner Chloe Bailey.

“After an extensive search, it was abundantly clear that Halle possesses the rare combination of spirit, heart, youth, innocence, and substance — plus a glorious singing voice — all intrinsic qualities necessary to play this iconic role," director Rob Marshall said in a statement, per Den of Geek.

Shortly after her casting, Bailey was the subject of some racist comments online, with a small but vocal minority of internet trolls pointing out that Ariel, a completely fictional mermaid, has white skin and red hair.

Bailey didn't let any of the comments bother her though; she told Variety that she doesn't "pay attention to the negativity." "It's going to be beautiful. I'm just so excited to be a part of it," she gushed.

While it's yet to be confirmed, Variety reported back in June that McCarthy is in talks to play Ursula, the nefarious sea witch who steals Ariel's voice.

It's a powerhouse role, and at the premiere of her film The Kitchen, McCarthy told Variety that she's excited to see Queen Latifah play the notorious villain in the TV musical as well. "She can do anything," McCarthy said. "I'll be like (raises hands) both hands on chin watching her."

Playing Ariel's little buddy Flounder is Jacob Tremblay, who can be seen in Room, Wonder, and the new film Doctor Sleep.

Like McCarthy, Bardem's role hasn't yet been confirmed, but he's in talks to play Ariel's stern father, King Triton. Bardem has had numerous high-profile roles, including in No Country for Old Men, Skyfall, Mother!, and Pirates of the Caribbean.

Diggs is in talks to play the musical crab Sebastian. It's a fitting role for the actor/rapper, who made his first big splash by playing the first Thomas Jefferson and Marquis de Lafayette in Hamilton. He's since been spotted in Black-ish, Undone, and Velvet Buzzsaw, and wrote and acted in his own film Blindspotting, which was highly praised on the film festival circuit.

Awkwafina is set to play Scuttle, the eccentric seagull. Though originally a rapper, she's been moving more into acting in recent years, with roles in Ocean's Eight, Crazy Rich Asians, and the emotional indie film The Farewell.

One of the major questions surrounding The Little Mermaid film is who's going to play Ariel's love interest. Initially it was reported that singer Harry Styles was the frontrunner to play the role, but the casting never materialized.

When asked why he turned down the role of Eric, Styles explained to The Face magazine that he wanted to just "put music out and focus on that for a while." He continued to say he thinks "everyone involved in it is amazing" though, and that he'll "enjoy watching it, I’m sure."

Right now, Deadline reports that Cameron Cuffe (Seg-El in Krypton) and Jonah Hauer-King (2017's Little Women) are currently in the running for Eric.