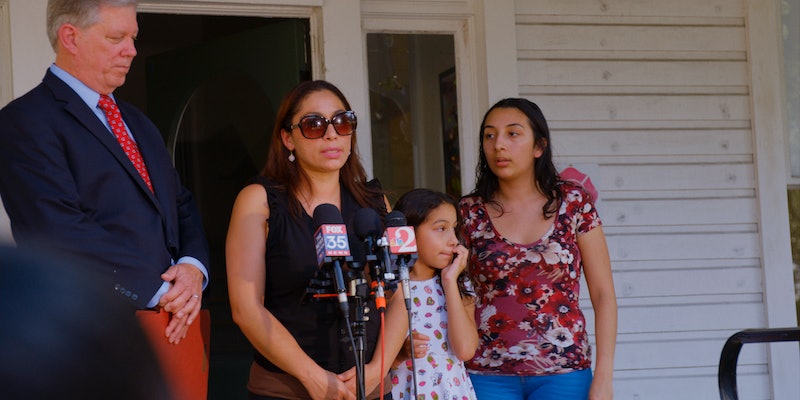 Immigration policy has preoccupied the American national consciousness since 2016, when Donald Trump was elected on the promise to build a wall. The dilemma posed to the producers of Netflix's Living Undocumented, then, was how to make a compelling, critical show about a story America's been watching unfold for years. What's left to say?

For co-director and executive producer Aaron Saidman (Leah Remini: Scientology and the Aftermath, Free Meek), the answer lied in one man's story. A colleague showed Saidman and his producing partner footage of a chef who'd been living and working in the United States for 20 years. He was on the way to a culinary event in Los Angeles when ICE suddenly detained him.

"That was really the spark," Saidman tells Bustle. Living Undocumented didn't have to tell a different immigration story, it just had to tell the story differently than it was being told on cable news, where the narrative was clambering to catch up with the latest brutal policy shift. Along with co-director Anna Chai (WASTED! The Story of Food Waste), executive producer Selena Gomez, and the rest of the crew, Saidman set out to tell the U.S. immigration story not from the perspective of those pulling the invisible strings, but those tied to them. The result? Six hour-long episodes chronicling real families as they struggle through an increasingly capricious immigration system to avoid deportation.

The Living Undocumented team spent the summer of 2018 consulting immigration attorneys, advocacy groups, journalists, blogs, and social media to find the right subjects. They were determined to depict illegal immigration as more than just a border issue, casting an Israeli couple living in Los Angeles, a Mexican man living in Milwaukee, and a Laotian family settled in South Carolina, among others.

We meet these subjects in different stages of their immigration battles. Ron and Karen left Tel Aviv in 2001 and overstayed their tourist visas. Alejandra Juarez entered in 1998 seeking asylum from Mexico and is now facing deportation. In an early episode, Luis Diaz — who arrived from Honduras in 2012 — is deceived by ICE officials into entering an agency office and then detained.

Multiple participants told producers they were nervous about putting their names and faces on the record, fearful they would be vulnerable to ICE reprisals. Chai says most participants had immigration attorneys advising them, but still "they didn't know if something they would do could jeopardize their case." Watching the series, it's hard to see how exposure could make things much worse for these families, most of whom are already living on the radar of the authorities.

In the end, Living Undocumented's skeleton crew of roughly five people were invited into eight different homes. The hope was to keep the crew small enough to fade into the background, but the intimacy of a shared trench can have the opposite effect. Across eight months of filming, the cast and crew made dinners together, folded laundry, and celebrated birthdays. They shared tissues and secrets. "Some of these people, they hadn't talked about this stuff for a really long time," says Chai, who is still in touch with a lot of the subjects. "It's not a topic that you talk about with people at work or at a dinner party.”

But intimacy is a double-edged sword. Had Chai and Saidman not been invited so deeply into the lives of their subjects, it may have been easier to make the show, which doesn't shy from dramatic nadirs: ICE proceedings, decision notifications, appeals, deportations, excruciating goodbyes. In one early, gut-punching scene, Alejandra Juarez takes a phone call from her attorney with the cameras only inches away. You can see the cell phone casting light on her face. "She's crying," remembers Chai. "There's snot, and it was hard to film but it felt important to include those moments... It's the unpleasant part of this process that you can't ignore."

More than anything, Living Undocumented is a series about getting on with regular life when the circumstances are anything but. The show mostly eschews statistics and politics, instead exposing what it feels like to fear the ring of the phone or the knock on the door as much as the policeman's siren because you don't know when or how ICE might come for you. How do you wake up and brush your teeth and get your kid to school when you know the end of life in America could come between one ordinary morning and the next?

When asked how they'd know if Living Undocumented is successful, Chai and Saidman said they were optimistic it would "raise awareness" — a lofty if nebulous goal that feels both too meager for the moment and more than we have the right to ask from a television show, even in this age of ambitious television. Ultimately, Living Undocumented exceeds its modest aim, capturing not only the America we're already living in, but the parts of it that we're perhaps failing to see.

More like this
'The Capture' Is Finally Back – & S2 Looks Tense AF
By Sophie McEvoy and El Hunt
A Political Thriller Inspired By The Munich Massacre Is Coming Soon
By Darshita Goyal
What's New On Netflix: A Third '365 Days' Movie & Lili Reinhart’s New Film
By Arya Roshanian
What’s New On Netflix: 'Never Have I Ever' & 'Indian Matchmaking' Return
By Arya Roshanian
Get Even More From Bustle — Sign Up For The Newsletter