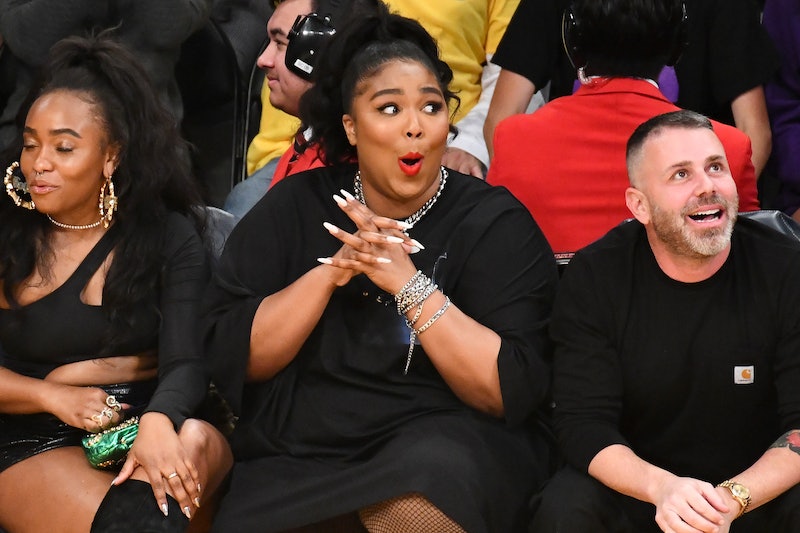 Lizzo's thong-baring Lakers game outfit sent people into a complete tizzy, for both good and bad reasons. But she wants to make one thing about her revealing get-up clear. Lizzo debunked a myth about her controversial Lakers outfit during an appearance on CBS This Morning on Thursday, Dec. 12, and clarified that there was layers in her outfit that might have been naked to the eye, meaning none of her flesh actually touched the seat, despite the apparent lack of fabric covering her derriere.

On the morning show, the artist was praised by host Gayle King, who said she was "so uniquely" herself, before asking about the backlash to her Lakers game garb. In typical Lizzo fashion, she wasn't bothered at all by the haters. “I stay in my own positive bubble,” she said. “It’s their opinion. It’s not for me to really ingest, it’s for them to express and for me to choose to listen to or not.” And, while the singer's mantra is to not stress about her haters, she did want to clear up the misconception that she wasn't wearing anything underneath her dress. “I had on layers down there, so it wasn’t just flesh to seats," she revealed. "Contrary to popular opinion."

Lizzo was met with a wave of backlash after she sported a cut-out t-shirt dress that showed off her backside to the Los Angeles Lakers vs. Minnesota Timberwolves game on Sunday, Dec. 9. Many social media users thought wearing that outfit in a public setting, where kids may be present, was inappropriate. Others defended the artist, arguing that people were simply uncomfortable with seeing the bodies of larger Black women.

The singer later addressed the backlash on Instagram, telling fans that she hoped her daring outfit inspired them. "Who I am and the essence of me and the things that I choose to do as a grown-ass woman can inspire you to do the same," she said on Instagram Live earlier this week.

Needless to say, Lizzo has no regrets, and rightfully so. As she said on CBS, she's worked hard in order to be proud of her figure, and she's not going to stop showing it off. “You know how long it took me to fall in love with this body?” she said. “My butt was my least favorite thing about myself and I learned to love it and that was the thing everybody can’t stop talking about.” Keep giving them something to talk about, Lizzo.