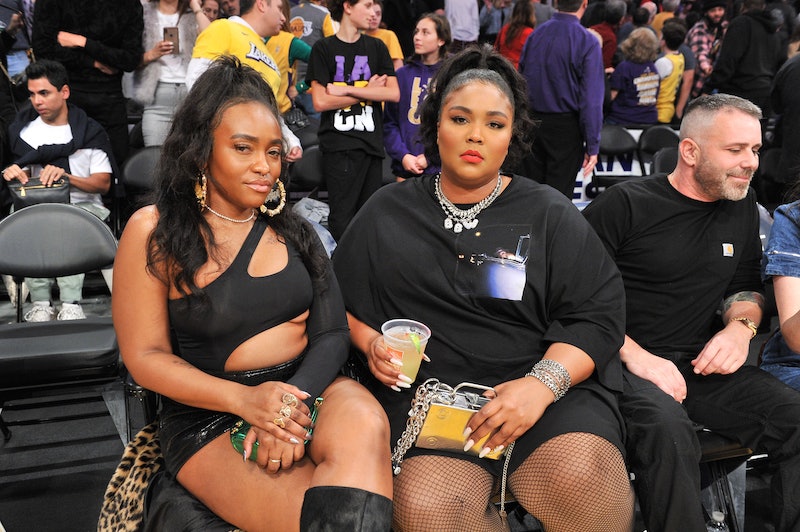 Excuse Lizzo while she feels herself — even if she's attending a basketball game outside the privacy of her own home. After the singer earned criticism for the risqué outfit she wore to a Lakers game on Dec. 8, Lizzo defended her thong-baring dress in an Instagram Live video, explaining that she isn't fazed by any of her critics. Lizzo made headlines on Sunday evening, after she got up to dance along to her song, "Juice," during the game, and revealed that the t-shirt dress she was wearing had a large cut out in the rear, showcasing her black thong.

Many of her critics thought it was "inappropriate" for Lizzo to wear such a revealing outfit to an NBA game, since there were children in attendance, while others debated whether or not the singer would be receiving such harsh criticism if she were skinny. Regardless of the motivation, Lizzo fired back on her Instagram Live on Monday, Dec. 9, in order to defend herself and her body. "This is who I've always been," Lizzo said in the video, explaining that she isn't bothered by the critiques. "Now everyone's looking at it and your criticism can just remain your criticism."

The eight-time Grammy nominee continued, "Negative criticism has no stake in my life, no control over my life, over my emotions. I'm the happiest I've ever been, I'm surrounded by love."

In fact, Lizzo also noted in her Instagram Live that she hoped her confidence and risk-taking ensembles would inspire other people to do and wear whatever makes them happy. "Who I am and the essence of me and the things that I choose to do as a grown-ass woman can inspire you to do the same," she explained. "You don't have to be like me. You need to be like you. And never ever let somebody stop you or shame you from being yourself."

The singer wrapped up her defense by explaining that she just wants to "spread that love and also spread these cheeks," before joking that anyone who has an issue with her can keep it to themselves. "If you really don't like my ass, you can kiss it," Lizzo declared with a laugh. "'Cause kissing it makes it go away, I promise."

Lizzo has long been open about the importance of self-love and her desire to inspire other women — especially women of color — to find their own love and confidence through her career. “I take self-love very seriously because when I was younger, I wanted to change everything about myself," she told Elle back in September. "I didn’t love who I was because I was told I wasn’t lovable by the media, by [people at] school, by not seeing myself in beauty ads, by not seeing myself in television ... by lack of representation."

In an Op-Ed for NBC News' THINK a few months earlier, Lizzo explained that she sees self-love as "survival," and that she wants to try and help others reach a place of confidence and acceptance. "I understand how difficult it is to “just love yourself” in a society in which the media quite literally tells us that we don't have enough money to love ourselves," the singer wrote, adding, "I don't take self-acceptance for granted or lightly, because I know it's difficult." Because her journey towards self-love has been so important to her, Lizzo explained, "I feel like my job is to push the narrative about self-care further and not just give up because it's mainstream now." And if that means wearing a revealing oufit at a basketball game, so be it.

More like this
Jameela Jamil Defends Sam Smith After Trolls Body-Shamed Them
By Jake Viswanath
I Tried Kendall Jenner's No-Pants Look As A Plus-Size Woman
By Sarah Chiwaya
Instagram & Facebook May Finally Lift Their Notorious Nudity Ban
By Allie Fasanella
18 Photos Of Jennifer Lopez’s Mansion You Can Now Buy For $42.5 Million
By Alyssa Lapid
Get Even More From Bustle — Sign Up For The Newsletter
From hair trends to relationship advice, our daily newsletter has everything you need to sound like a person who’s on TikTok, even if you aren’t.