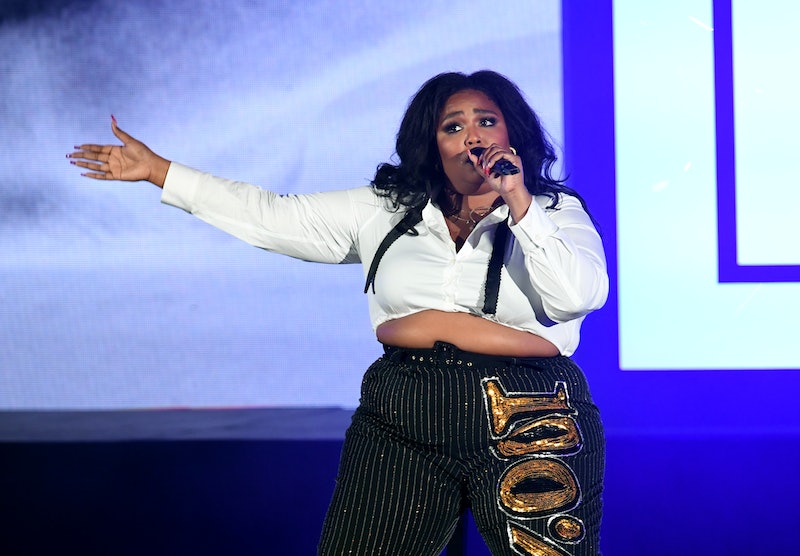 If 2019 has been anyone's year, it’s been Lizzo’s. The singing sensation who brought us Boys, Juice, and Good As Hell has spent the year broadcasting the message that self love is paramount, with one lyric is particular has been the biggest mood for 2019. But the lyric itself has complicated origins that have recently come to light. Today, Lizzo credited artist Mina Lioness for the DNA test lyric, and here is the full story behind how that came about.

We all know that when "I just took a DNA test... turns out..." blasts through the speakers in the club, things are about to go off. Truth Hurts has been an immense success story, reaching number one in the Billboard top 100. However, the song success has not come without its complications.

In Feb. 2018, London music Mina Lioness tweeted at Lizzo, saying: "Now everyone believes those were your words, when in fact they were mine. My creativity, my wit, and my comedy." She was referencing the fact that, in Feb. 2017, she wrote a tweet saying: "I did a DNA test and found out I'm 100% that bitch" in response to something Demi Lovato had tweeted.

In response, Lizzo wrote to Mina saying: "Truth Hurts was written in June fyi— someone made a meme on IG that said 'I’m 100% that bitch' and we were inspired, I give that meme credit when I talk about making the song. I’ve never seen ur viral tweet but I’m glad it exists."

In June 2019, The Blast reported that Lizzo had filed to trademark the lyric in question, which brought the issue to light again.

After the news about the trademark, another copyright claim was brought about by brothers and songwriting team of Justin and Jeremiah Raisen, who posted a message to Instagram on Oct. 15 stating that the DNA lyric was taken from a song written by Lizzo in collaboration with them, Jesse St John, and Yves Rothman. Lizzo has denied these claims, and has since filed a lawsuit against the Raisen brothers and Rothman, reports Variety.

The debate over ownership of the lyric came to a head yesterday (Oct. 22) when Lizzo took to Twitter and Instagram to state, "Hey y'all, as I've shared before, in 2017, while working on a demo, I saw a meme that resonated with me, a meme that made me feel like 100% that bitch. I sand that line in the demo, and I later used the line in Truth Hurts." She continued:

"The men who now claim a piece of Truth Hurts did not help me write any part of the song. They had nothing to do with the line or how I chose to sing it. There was no one in the room when I wrote Truth Hurts except me, Ricky Reed, and my tears. That song is my life, and its words are my truth."

She finished by saying:

"I later learned that a tweet inspired the meme. The creator of the tweet is the person I am sharing m success with... not these men. Period. Thank you to everyone who has supposed me and my song. Xoxo"

On hearing the news that she was going to be credited for the lyric, Lioness wrote: “I just took a DNA Test, turns out I'm a credited writer for the number one song on Billboard." She went on to thank Lizzo and her team and said, "I want to publicly thank Lizzo and her entire management team for embracing me and reaching out. I have received nothing but love from her through our communications, so I truly do thank her."