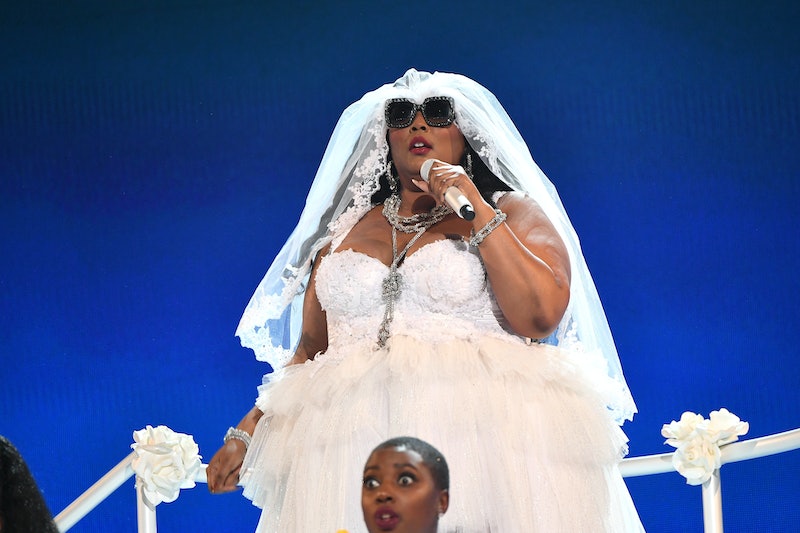 Lizzo's breakout hit "Truth Hurts" has become an undeniable, culture-defining anthem with now-iconic lyrics made to wear on T-shirts. But who exactly wrote those lyrics has come into question after brothers Justin and Jonathan Raisen publicly claimed that they should have received writing credits on the track. On Wednesday, Oct. 23, Lizzo responded to the "Truth Hurts" songwriting accusations, and it's clear that she's sticking to her guns when it comes to who deserves credit for co-writing her biggest hit. In fact, a few hours after she released a statement on social media, Lizzo reportedly filed a lawsuit asking a judge in California's federal court to declare that the Raisens, and a third party, Justin "Yves" Rothman, not be credited as co-writers.

The rapper-singer-songwriter took to all of her social media accounts to issue a statement concerning the Raisen brothers' accusations, denying that they had any part in creating the hit. "The men who now claim a piece of 'Truth Hurts' did not help me write any part of the song," she said. "They had nothing to do with the line or how I chose to sing it. There was no one in the room when I wrote 'Truth Hurts,' except me, Ricky Reed, and my tears. That song is my life, and its words are my truth."

On Oct. 15, Justin went public with his claims that he had written a key lyric in "Truth Hurts." As he explained in an Instagram post, he and his brother are claiming that her singing of the line “I just took a DNA test, turns out I’m 100% that bitch" and its accompanying melody, was originally used in a demo entitled "Healthy." Justin and Jonathan were co-writers on that demo, along with Lizzo and fellow songwriters Jesse Saint John and Rothman, in 2017, which the Raisens are claiming means they are entitled to songwriting credits on "Truth Hurts."

Justin claimed that neither of them were credited "for the use of the parts of 'Healthy' (melody, lyrics, and chords) that appear in 'Truth Hurts'." They reportedly put the song in dispute after its original release in 2017 after failing to reach Lizzo or producer Ricky Reed's teams. "We’ve tried to sort this out quietly for the last two years, only asking for 5% each but were shutdown every time," he claimed.

As Lizzo acknowledged in her statement, she later used that same line in "Truth Hurts," saying that it was inspired by a social media meme that "resonated" with her — something the Raisen brothers do not deny. According to the artist, John is credited as an official co-writer on "Truth Hurts" because, as Lizzo explained after the song's original release in 2017, he came up with the idea to use that line in the song.

Complicating matters is the fact that the lyric in question didn't actually come from the meme that they saw in the studio. The line was actually originated by British singer Mina Lioness in a 2017 tweet. Mina initially complained on Twitter in August 2019 that she didn't receive her due credit for the "100% that bitch" lyric. But in her statement, Lizzo seemed to acknowledge Mina and give her credit for inspiring the now infamous tagline.

"I later learned that a tweet inspired the meme," she wrote in her new statement. "The creator of the tweet is the person I am sharing my success with... not these men. Period." Mina later confirmed that she had been awarded credit for her Tweet, telling her Twitter followers that she's now a credited songwriter on "Truth Hurts" and thanking Lizzo and her team for reaching out.

The dispute has yet to be officially resolved, but Lizzo's response makes clear that she is not interested in sharing credit with the Raisen brothers.