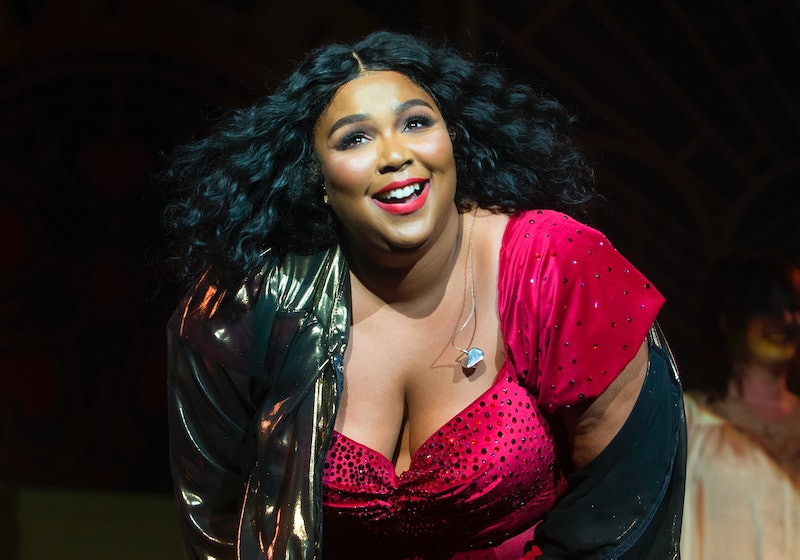 Lizzo is truly feeling "good as hell" right now, thanks to a whole lot of love from the Recording Academy. Shortly after the 2020 nods were announced on Wednesday, Nov. 20, Lizzo shared her reaction to receiving 8 Grammy nominations by sharing a series of grateful tweets and emotional Instagram Story posts. According to the New York Times, Lizzo — who earned the highest number of nominations this year — is nominated in every single major category at the awards, including Record of the Year for "Truth Hurts" and Album of the Year for Cuz I Love You.

In response, the singer and rapper shared a series of tweets with her fans, in which she praised her fellow artists. "This has been an incredible year for music and I'm just so thankful to be a part of it," she wrote before declaring that all of the nominees are "winners" this year. "I love you," Lizzo wrapped up her tweets, adding, "Let's have a wonderful blessed day."

Meanwhile, on her Instagram Story, Lizzo posted an emotional selfie from mid-flight, captioning it "I'm cryin ... cuz I love you. Thank you," as a play on the titular song from her Grammy-nominated album. She followed that up with another post where she declared, "I'm on a flight to the States ... I'm finna drink champagne and cry happy tears of appreciation and love."

Lizzo's 8 Grammy Awards cap off an impressive and very successful year for the singer, who released Cuz I Love You back in April, and broke the record for the longest-running number 1 female rap single on the Billboard Hot 100 in September. "Truth Hurts is officially the longest solo female rap #1 in history," Lizzo wrote on Twitter at the time, alongside a Photoshopped photo of her younger self holding the Billboard charts. "I fell in love with music when I was 9 years old...I had no idea our love affair would go this far. Good to know it was all worth it. Don’t run away from what your heart wants. Follow that bitch to ur destiny."

In a July interview with People, the singer and rapper revealed that she almost quit music right after releasing "Truth Hurts" — which is nominated for Record of the Year, Song of the Year and Best Pop Solo Performance at the 2020 Grammys — because she was in a low place after working for so long on her music career. “The day I released ‘Truth Hurts’ was probably one of the darkest days I’ve had ever in my career," she told the outlet.

"I remember thinking, 'If I quit music now, nobody would notice. This is my best song ever, and nobody cares,'” Lizzo explained. "I was like, 'F*ck it, I’m done.' And a lot of people rallied; my producer, my publicist and my family, they were like, "Just keep going because this is the darkest before the dawn.'"

"Now the song that made me want to quit is the song that everyone’s falling in love with me for," Lizzo continued, "which is such a testament to journeys: Your darkest day turns into your brightest triumph."

Considering the long journey and hard work that Lizzo has put in over the past decade, it's no wonder that becoming the most nominated artist at the 2020 Grammys brought the singer to tears. Hopefully, if she manages to take home any trophies at this years' ceremony, she will celebrate those triumphs with even more champagne and emotional social media posts.