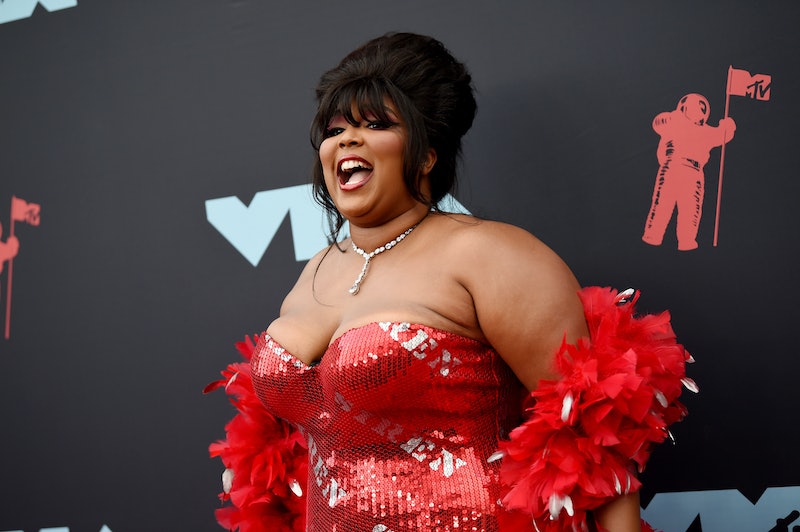 Celebratory flute solos are in order: Lizzo's "Truth Hurts" is the longest-running No. 1 rap single by a solo female artist in the Billboard Hot 100's history. The record-breaking track — which dethroned Shawn Mendes and Camila Cabello's "Señorita" — has topped the Billboard Hot 100 for a fourth week in a row as of Monday, Sept. 23 — surpassing Cardi B's three-week reign with "Bodak Yellow" in October 2017, according to Billboard. On Twitter on Sept. 23, Lizzo celebrated the victory with the ultimate throwback picture.

"Truth Hurts is officially the longest solo female rap #1 in history," she captioned a photo of her younger self Photoshopped with the Billboard Hot 100 top ten songs. "I fell in love with music when I was 9 years old...I had no idea our love affair would go this far. Good to know it was all worth it. Don’t run away from what your heart wants. Follow that bitch to ur destiny."

“Truth Hurts” marks only the third time a female rapper unaccompanied by another artist has reached No. 1 on the Billboard Hot 100. As mentioned before, Cardi B’s "Bodak Yellow" served as the second instance in 2017 and, prior to "Bodak Yellow," Lauryn Hill's "Doo Wop (That Thing)" had been the first to reach No. 1 in 1998. As such, Cardi B’s reign in 2017 served as the first of its kind in 19 years.

In the case of rap No. 1s by female artists not confined to a solo act, “Truth Hurts” also reigns as the longest No. 1 in five years since Iggy Azalea and Charli XCX’s seven-week reign with "Fancy" in 2014, according to Billboard. Both "Truth Hurts" and "Fancy" join the ranks of three other female rappers in No. 1 spots: "I Like It" by Cardi B (the first female rapper to achieve two No.1s on the charts) Bad Bunny, and J. Balvin in 2018, "Lady Marmalade" by Lil’ Kim, Christina Aguilera, Mýa, and Pink, and "Stand Up" by Shawnna and Ludacris.

Lizzo’s groundbreaking feat comes on the heels of a whirlwind summer for the rapper, who unveiled her third studio album Cuz I Love You on April 19. Since then, the rapper has delivered standout live performances at the BET Awards in June and the MTV Video Music Awards in August. She garnered several award nominations at both ceremonies, such as an MTV Video Music Award for Best New Artist and BET Award for Best Female Hip-Hop Artist. She’s also up for a BET Hip Hop Award for Best Album of the Year.

Ironically, the rapper almost quit music after releasing the No. 1 hit back in 2017. In a July 24 interview with PEOPLE, Lizzo explained, "The day I released 'Truth Hurts' was probably one of the darkest days I’ve had ever in my career. I remember thinking, 'If I quit music now, nobody would notice. This is my best song ever, and nobody cares.' I was like, ‘F*ck it, I’m done.’ And a lot of people rallied; my producer, my publicist and my family, they were like, 'Just keep going because this is the darkest before the dawn.'"

She added, "Now the song that made me want to quit is the song that everyone’s falling in love with me for, which is such a testament to journeys: Your darkest day turns into your brightest triumph.”

If Lizzo were to take a DNA test, the findings would indicate that she is 100% that groundbreaking artist.