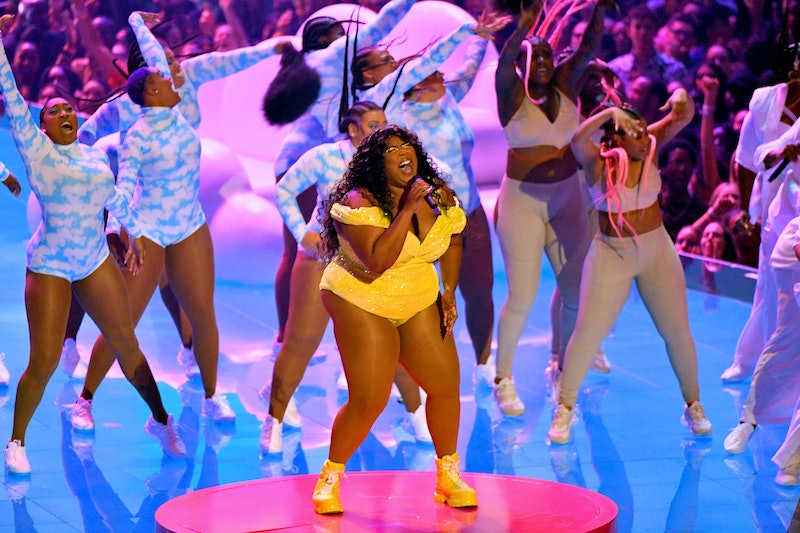 Lizzo's songs are all about female empowerment and body positivity, so it's no surprise that her performance at the 2019 VMAs proved to be a total showstopper moment that deserves to be watched at least a couple hundred times, if not more. But just in case you needed yet another reason to be inspired by this talented artist, Lizzo's message about her VMAs performance is a heartfelt pep talk to fans that'll leave you feeling better than any therapy session ever could. We may not deserve her unending wisdom and sage advice, but she's giving it to us regardless, prompting the world to collectively bow down to her greatness and worship at the altar of Lizzo.

The singer took to Instagram on Tuesday, Aug. 27, to express how much last night's performance meant to her on a personal level and why it should serve as an important moment in history. "Every woman on that stage had a story of either why they shouldn’t have been on that stage or why they didn’t believe they deserved to be on that stage, including myself," she captioned her post, alongside a clip of her VMAs number. "'Imposter syndrome' is a privilege to the most marginalized group in America. Not only were we taught to believe we didn’t belong in the spotlight, but when we finally get to a place to self-worth the world tries to knock us down."

But despite all of those hurdles and struggles in the past, yesterday was not one of those days and helped her prove to the world that things really can get better. "Not this time. The world smiled with us," she continued. "The world sang us. The world saw our beauty last night. The world saw black women feeling Good As Hell and cheered us on."

Lizzo then proceeded to thank all of the people that went into making it all happen because she is a true gem of a human being who refuses to take all of the credit herself. "Thank you to the best team on the planet @quinnwilsonn @jemelmcwilliams @marko_monroe @iwantalexx @theshelbyswain and a huge I love you to my beautiful heavenly dancers and singers," she stated, adding: "Being a big black woman with y’all by my side is the honor of my life, and I hope this moment stays forever between yo titties."

Lizzo's social media post isn't the only time she served up some Grade A advice for her fans and fellow artists alike. During her incredible mash-up of hit songs "Truth Hurts" and "Good As Hell," Lizzo took a moment to address the audience and let them know that they deserve to feel good about who they are and should never apologize for being true to themselves, stating:

The crowd went wild, as you can imagine, and now with her latest message about self love, Lizzo continues to be a source of admiration for all women looking to make their unique mark on the world.