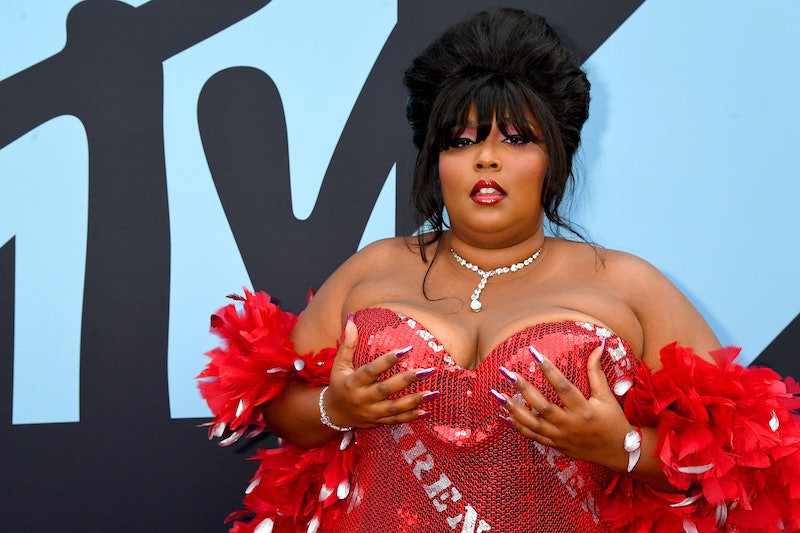 If 2019 has proven anything, it's that it's Lizzo's world and we're just living in it. And never has that been more evident than at MTV's Video Music Awards. This year, Lizzo was nominated for Best New Artist, Push Artist of the Year, as well as Song of the Summer for "Truth Hurts," and Best Power Anthem for her collaboration with Missy Elliott, "Tempo." But she didn't just come to take home some Moon People, she came to perform. And Lizzo's 2019 VMAs performance absolutely nailed it.

The superstar sang her inescapable hit, "Truth Hurts" in front of a giant, inflatable booty — Lizzo is one of the queens of twerking after all. Her high energy had Queen Latifah jumping out of her seat and cheering, and honestly, same. Lizzo then transitioned into her song "Good As Hell" (aka the best breakup anthem out there), taking off her trench coat to show off a yellow bodysuit, and absolutely killing it. Not only did she have the entire crowd on their feet, she had them singing every word. But it was her message of self-love that really drove everything home.

In the middle of singing "Good As Hell," the singer stood on a pedestal and said, "I'm tired of the bullsh*t." She continued, telling her fans, "It's so hard trying to love yourself in a world that doesn't love you back, am I right?" The crowd went wild, and then she delivered the final blow, telling us all, "You deserve to feel good as hell! You deserve to feel good as hell!"

Needless to say, Lizzo's performance had audiences at home standing up and dancing, and, of course, declaring themselves Lizzo stans for life. She is, after all, "100% that b*tch."

Lizzo's performance was also received with a lot of love by the celebrities in the audience at the VMAs. Queen Latifah herself was seen multiple times enjoying the performance and jamming out to Lizzo's self-love anthem. And fans were touched to see such a musical legend show respect for the newer artist. "Don't know why seeing Queen Latifah go up for Lizzo choked me up, but it definitely did?! #MTVVMAs," tweeted Shannon Miller, @Phunky_Brewster.

Lizzo was already having a big night before her show-stopping performance. Mere hours before she took the stage, the artist celebrated her single "Truth Hurts" hitting number one on Billboard's Hot R&B/Hip-Hop Songs and Hot Rap Songs charts. And in her tweet reacting to the news, she seemed more than ready to give her VMAs performance her all. "THIS JOURNEY HAS BEEN INCREDIBLE," she wrote, with a crying for joy emoji, "SEE YALL AT THE @vmas."

A few hours later, Lizzo returned to Twitter to make it clear that, win or lose tonight, she still considered herself a champion. When the official MTV account tweeted that the Best New Artist category was officially down to her and Billie Eilish, Lizzo retweeted it, commenting, "WHAT? I WAS 100% POSITIVE I DID NOT WIN LMAOOOOOO." But instead of telling her fans to vote for her and push her over the edge, the singer took a step back, saying, "VOTE FOR ME OR BILLIE EITHER WAY I FEEL LIKE A WINNER."

With her performance, Lizzo proved she's a winner no matter what. And with her message of self-love, she made everyone a winner tonight.