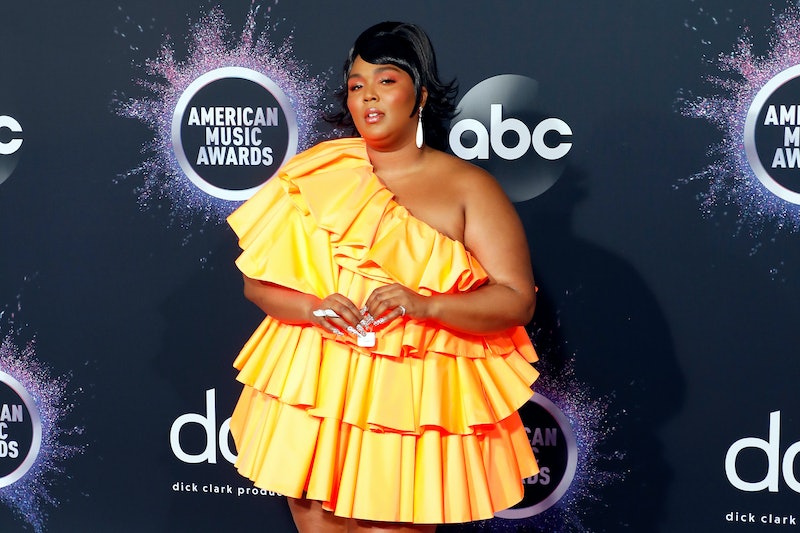 Just call her Mary Poppins. Lizzo revealed what's actually in her tiny purse on Instagram on Monday. In a TikTok clip that invoked Julie Andrews’ famed nanny and her magical bag, Lizzo made a callback to her viral teeny tiny Valentino purse that took the American Music Awards red carpet by storm last November. While the tiny purple bag in the video isn’t the same purse from the AMAs carpet, the contents are still a magical delight.

In the post, captioned “YALL WANNA KNOW WHATS IN MY TINY BAG B*TCH?,” the “Truth Hurts” singer pulls out an array of items from the bag as an unidentified woman hilariously narrates out of view. A pencil, a TV remote, a tin of chips, a bottle of wine, a neon yellow outfit, and some hair extensions are among the items pulled out of the miniature pastel purple purse. The rapper says of the hair extensions in the video, “Shelby, I don’t have room for this in my bag!”

Lizzo’s tiny purse reached viral status when she arrived at the AMAs in an orange one-shoulder ruffled dress (also designed by Valentino) complete with crystal nails and the white miniature Valentino bag. She shared the look on Instagram at the time and wrote, “@maisonvalentino bag big enough for my f*cks to give."

Soon enough, Lizzo’s tiny purse churned out a series of memes on Twitter. One Twitter user wrote, “I can’t believe Lizzo carried our self confidence to the #AMAs2019;” and another user added, “You could fit all of the money in my bank accounts in Lizzo’s purse.” As for the items that the Hustlers actor carried in her miniature purse that day, Lizzo told POPSUGAR on the red carpet, “I've got tampons in here, a flask of tequila, condoms.”

Lizzo’s tiny purse isn’t the only time the “Juice” singer’s fashion choices have gone viral. Last month, the rapper attended a basketball game in Los Angeles and wore a black t-shirt dress with a cut-out in the back that revealed a black thong. In an interview with CBS This Morning, Lizzo remained unfazed about the criticisms and said, “It’s their opinion. It’s not really for me to ingest. It’s for them to express and for me to choose to listen to or not.”

During the interview, Gayle King and co. even referenced Lizzo’s tiny purse and gifted her the ultimate item to accompany it: a tiny coffee mug. Perhaps all great things truly do come in small packages.