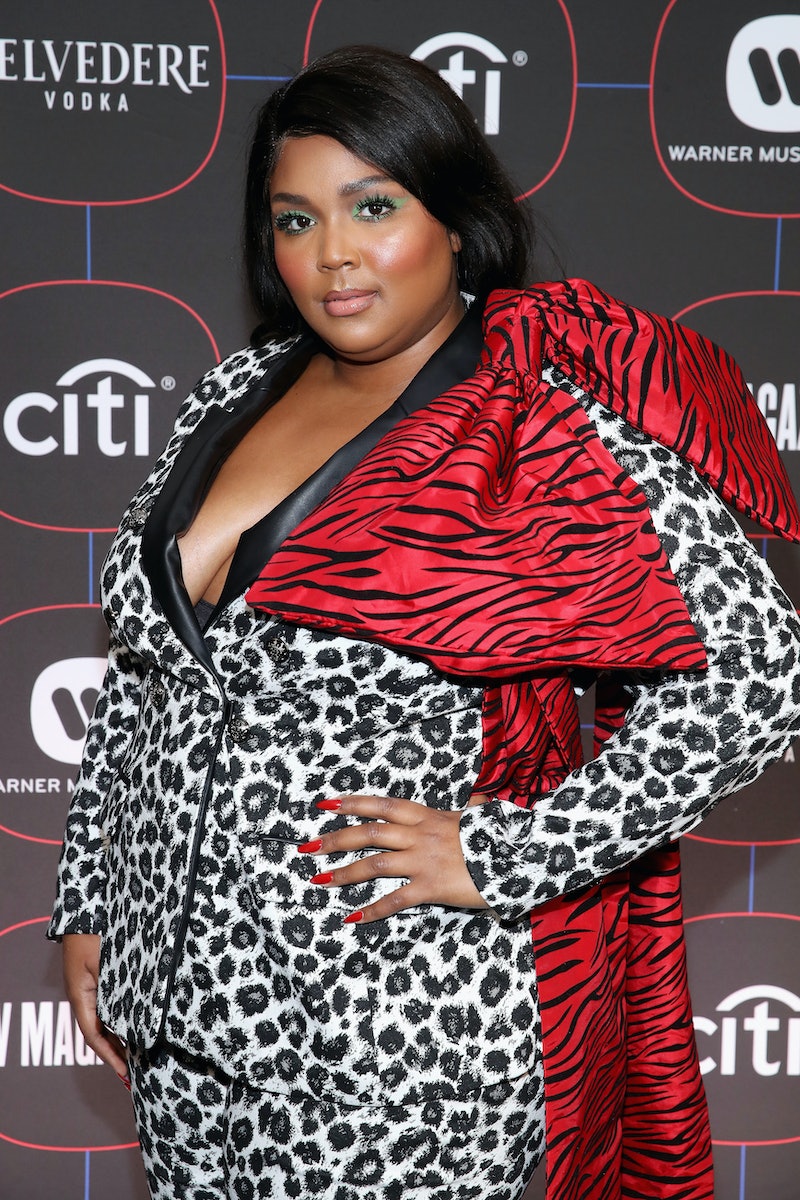 On Sunday, "Cuz I Love You" singer and activist Lizzo spoke out against gun violence on Twitter by urging the United States not to "normalize" mass shootings. Following tragic mass shootings in Dayton, Ohio and El Paso, Texas this weekend, Lizzo was among many people who took to social media to express feelings of helplessness and frustration at the lack of progress following gun-related tragedies. The singer urged her followers not to become discouraged, and to keep pushing for change, even when it feels like the government is continuing to ignore critical issues.

On Twitter, Lizzo wrote about the terrorist attack in Dayton, Ohio, which left nine people dead and at least 27 more injured, per The New York Times. She encouraged people to continue to be outspoken about gun reform and vote ineffective politicians out of office. She wrote:

"Just got off the phone w/ fam in Dayton... it was a close call for them but that’s not the case for 9 other families between this & the terrorist attack in El Paso & recent other shootings I feel completely helpless.. make noise & bring awareness.. vote.. don’t normalize this."

The singer went on to further discuss how hopeless these shootings can make people feel. In a reply tweet, Lizzo acknowledged how futile action seems in the wake of these tragedies, writing, "Sometimes I feel like my tweets are like screaming into a void of other hopeless screams... I feel like taking action but I don’t know what to do... I follow @Everytown, I sign petitions, I vote, I marched... i want progress so bad."

Lizzo's call to action followed a particularly devastating week of gun violence in the United States. On Saturday, a gunman attacked a Wal-Mart store in El Paso Texas, leaving 20 people dead and 26 more injured, as per The Times. Less than 24 hours later, the mass shooting in Dayton, Ohio followed. Last week, a shooting at the Garlic Festival in Gilroy, California left three people dead and wounded 13 more. There have been 32 mass shootings in the United States this year, according to the New York Times.

The "Truth Hurts" singer continued her Twitter thread on Sunday, writing to fans that she understood the feeling of despair these situations create. She wrote, "I know I’m not the only one who feels this way... I just wish the people who govern this country protected everybody the way they protect these white boys."

She also wrote about the importance of women, queer people, and people of color running for public office, and how these tragedies will only end when the government commits to representing everyone. She tweeted: "My activism is spreading self-love, I do that very well and I will continue to do it... and I will encourage young women and brown and black and queer people to run for office and hopefully the laws in this country will protect & reflect the real face of America... until then."

From pushing for more representative government, to continuing to advocate for significant gun-reform, Lizzo urged followers not to let the inaction normalize these events. The singer recognized how it is impossible not to feel helpless in the wake of these attacks, but she also encouraged fans to keep fighting, as only speaking out and taking direct political action will push the country closer to stopping these mass shootings.

More like this
Twitter Is In Awe Of Taylor Swift’s “Lavender Haze” Music Video
By Jake Viswanath
Twitter Is Roasting Liam Hemsworth Thanks To Miley Cyrus' New Song “Flowers”
By Jake Viswanath
'Brookside' Is Coming Back & Soap Opera Fans Are Going Wild
By Sam Ramsden
Austin Butler Recalls Lisa Marie Presley Showing Him Elvis’ Bedroom
By Jake Viswanath
Get Even More From Bustle — Sign Up For The Newsletter
From hair trends to relationship advice, our daily newsletter has everything you need to sound like a person who’s on TikTok, even if you aren’t.