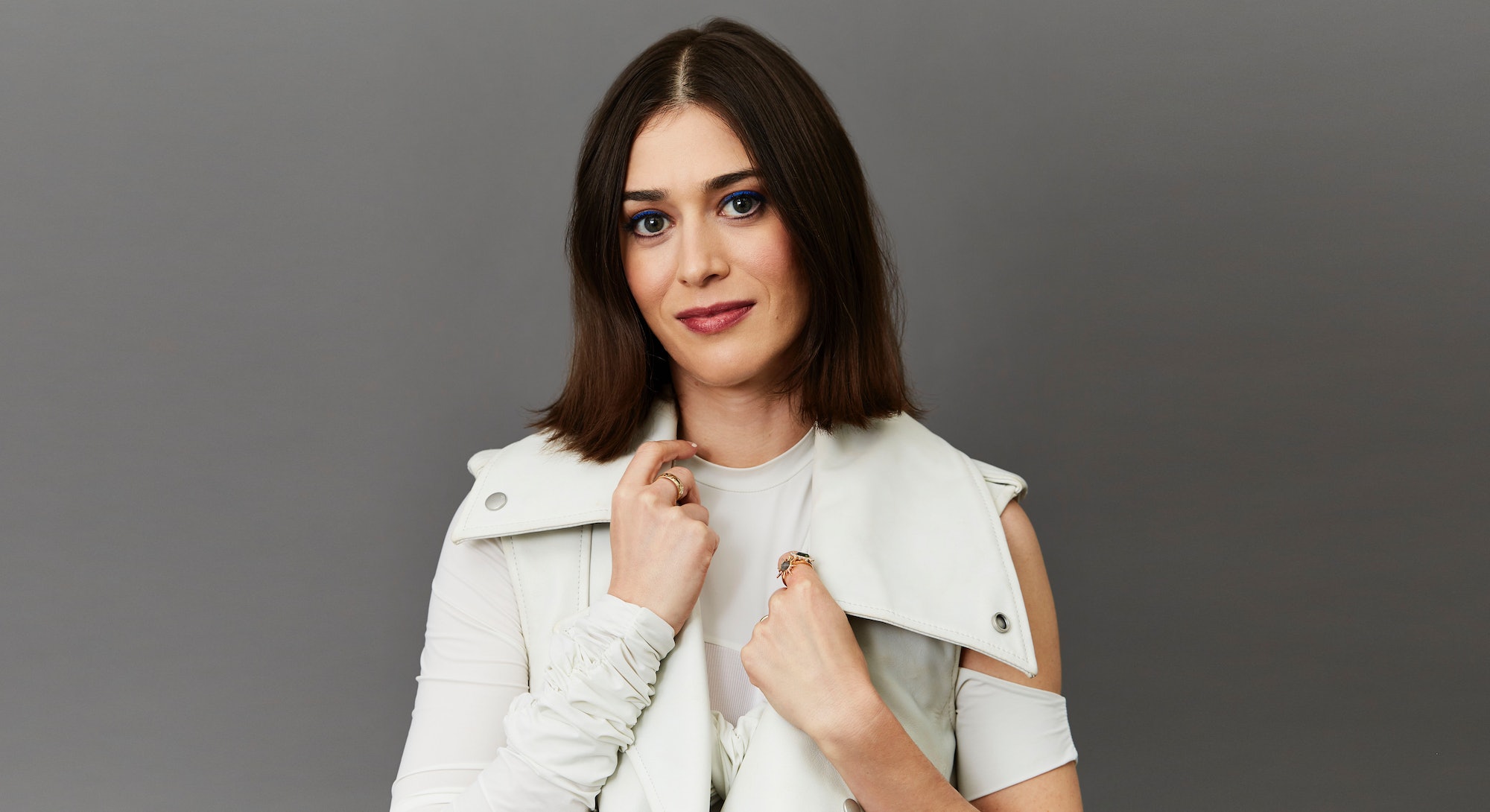 Unfortunately, Lizzy Caplan is wearing all white. Her wide-legged pants, asymmetrical tank top, and leather vest are making a deeply impractical fashion statement. The kind that says, I don’t spill wine, I don’t smudge chocolate, and I don’t eat Cheetos. "I do want these Cheetos, though," Caplan says, reaching for a Manhattan photo studio’s snack basket. "I'm gonna get yelled at like a child by my publicist for eating Cheetos in a white outfit." She dips three fingers into the bag's depths and bravely draws two craggy orange puffs into her mouth. It's just a snack, and Lizzy Caplan does not give a f*ck.

Starting with her breakout role in 2004's Mean Girls, Caplan has built a reputation for playing characters who excel at giving very few of them. Whether exacting revenge as the sardonic goth girl Janis Ian, drinking on her catering job as the aspiring comedian Casey Klein in Party Down, or rushing to bust out the cocaine as the brilliant yet hostile Gena in Bachelorette, Caplan's early career is characterized by her knack for making youthful messiness come off as simultaneously dangerous and appealing.

"I've played the ingenue before, but I'm certainly not the go-to, typecast ingenue — I always found that really boring," Caplan says of her early roles. "I always wanted to at least be the f*cked-up ingenue if I was going to be the ingenue." But after more than a decade playing variations on the 20-something hot mess, the 37-year-old now finds herself playing characters whose reckless abandon involves, say, shoving an ice cream scooper down a man's windpipe.

"I always wanted to at least be the f*cked-up ingenue if I was going to be the ingenue."

That particular murder via kitchen utensil is the work of Annie Wilkes, the mentally ill nurse at the center of Season 2 of Hulu's Castle Rock. As a younger version of the iconic Stephen King character played in an Oscar-winning turn by Kathy Bates in 1990's Misery, Caplan wears dowdy cardigans and a chillingly blank stare as she uses stolen anti-psychotics to manage the hallucinations that haunt her while she and her daughter Joy (Eighth Grade's Elsie Fisher) are waylaid in the eponymous town. It's a role that demands fearlessness — it was so physical that she was "covered in bruises all the time" — and Caplan was thrilled to be given the chance to go all out.

"There's just no vanity to [playing Annie] at all. No leading with sexuality or softness, or trying to be demure like a leading lady," she says. "It's a balls out, BIG, crazy performance. And I find that really liberating." Well, mostly: Shooting Castle Rock was emotionally taxing — Annie is "at an 11 a lot of the time," and the series shot on location in Massachusetts over a period of seven months. ("So much road kill. So many crazy weird bugs.") Some of the show's eeriest scenes were shot at an abandoned asylum in Tewksbury, Mass. "There's like the ghost spooky part of it, and then the lead paint and asbestos spooky part of it," Caplan says. "They promised me that they inspected [the locations]. I made them show me paperwork."

Caplan continues her foray into uniquely challenging roles this winter, playing twins-with-secrets Josie and Lanie Buhrman in the AppleTV+ crime drama Truth Be Told, premiering December 6. Here, the difficulties were less emotional than they were logistical. "Your day is twice as long, all the time," she says. "Because you do [the scene], and then you switch over and do it again. Double the lines to memorize." When I point out her Mean Girls co-star Lindsay Lohan deserves credit for pulling double duty as a preteen to play twins in Parent Trap, Caplan jumps in to crack a joke. "She was great. But you know what, she was young, she had a lot of energy."

"My dream has always been not to be some big celebrity or famous with all the trappings of that — it's always been to work for as long as I wanna work, and get to do and try different sh*t."

These days, Caplan is reveling in feeling grown up. "I'm just far less anxious," she says, a feeling she attributes to her partnership with fellow actor Tom Riley, whom she married in 2017. "I feel more settled in my life, now that my career is my career instead of the entirety of my existence." She's comfortable working less, and isn't about to uproot her life to a popular filming location like Canada for a TV gig with a multi-year contract. Having grown up in LA, she's a staunch defender of her city. But spending time in Riley's native London gave her new perspective on Hollywood. "On the one hand, it's beautiful," she says of her hometown. "On the other hand, it is suffocating. And I never realized it until I started spending a lot of my time in England." All it takes is a few days in LA, and "you start looking in the mirror for too long."

"It's this constant where are you in your career, where are you gonna be, how are you gonna get there? And I find that to be not so good for a person, if that person is me," Caplan says of the LA mindset. She lets out a sigh. "My dream has always been not to be some big celebrity or famous with all the trappings of that — it's always been to work for as long as I wanna work, and get to do and try different sh*t."

Her breakthrough dramatic turn as pioneering sex researcher Virginia Johnson in Showtime's Masters of Sex was a wake-up call in that department. She told The Telegraph in 2014 that before Masters, she considered herself a comedic actress whose range was limited. Looking back now, she thinks that attitude was self-protective — "that if I told myself the story that I was only capable of attempting one small area of acting, that that would be an easier life, or more attainable, perhaps," she says. She thought, "'I'm not gonna try to be a dramatic actress — that's for the serious girls — and I can only do this thing where I'm faking my way through everything.'" Playing Johnson for the show's four-season run (earning her first Emmy nomination in the process) broke her world wide open. "Somehow, miraculously, they let me play that incredible role that absolutely changed how I thought about myself [and] what I was capable of I won't even say doing, but attempting."

Lizzy Caplan has come a long way from playing a "sarcastic little teenager" in Mean Girls. But in some respects, Mean Girls is still her own personal "Are We Having Fun Yet?" — the thing people remember her from, and are most interested in hearing about more than a decade later. When I ask her where she thinks Janis would be now, or what she thinks she did after graduating high school, she hesitates. "I said some dumb thing on some other interview, something about how Janis Ian was a mean girl." The interview was BuzzFeed’s AM to DM, and her sound bite went viral.

"Janis went to a really good liberal arts college, found herself, experimented with drugs and alcohol…" Caplan begins. Then she cuts herself off: "I don't get it. I feel like Mean Girls is this holy grail that I'm not allowed to touch." She can already picture the headline. "Like, Ugh, Janis Ian would experiment with drugs and alcohol!"

But now that we've confronted the potential headline fodder head-on, Caplan no longer cares. She gamely continues. "I think she would have had a great time in college and found herself. She would have found her weird freaky art group, she would have moved to a major city, and she'd be f*cking thriving." A grin spreads across her face. "She'd show up to that reunion, head held high."