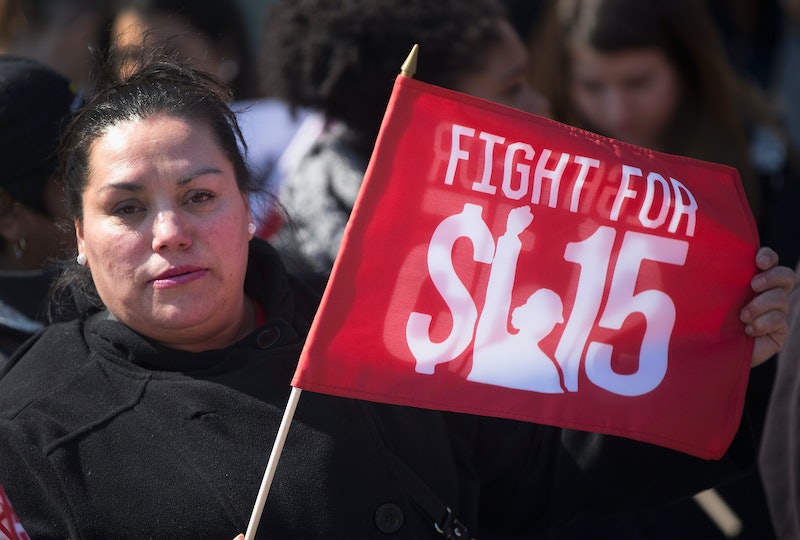 Prairie State workers are set for a raise. On Tuesday, Democratic Gov. J.B. Pritzker signed a minimum wage bill into law for Illinois. By 2025, the state's minimum wage will go up to $15 per hour as the law decrees a dollar-increase per year. Minimum wage workers, who currently earn $8.25 per hour, can expect to see their wages change beginning in 2020.

By setting the bar at $15 per hour, Illinois is joining the ranks of four other states to do the same: California, Massachusetts, New Jersey, and New York. In a statement on Tuesday, Pritzker said, "Today is resounding victory for the 1.4 million Illinoisans who will soon get a hard-earned and well-deserved raise. After nearly a decade of delay, I applaud the House and Senate for passing a living wage with the fierce urgency this moment requires."

"Phasing in the minimum wage over the next six years will put $6,300 a year into the pockets of nearly a quarter of our state's workforce and billions of dollars into local economies in every corner of our state," the governor added. "Whether you're a home health care provider in McLeansboro or a janitor in Rockford, hardworking men and women across Illinois deserve a raise and will get one."

While the law may be a welcome change for minimum wage workers, some businesses have expressed concerns about raised salaries posing threats to their companies' sustainability, according to NPR. For smaller scale businesses in parts of the state where the cost for living is more affordable than living in Chicago, the prospect of increasing wages seems to be daunting.

Pritzker has attempted to address those business model concerns. He assured business owners that he would include steps in the law to make sure everyone involved, from employees to employers, was satisfied with the move. The idea, according to the governor, is to uplift all "communities that were left out, left behind."

Illinois Democratic Sen. Kimberly Lightford, who has supported the fight to raise the state's minimum wage to $15 per hour for a long time now, said on Tuesday, "I've been trying to get this done for almost 10 years and the governor gets it done in 30 days."

Nonprofit organizations like the Economic Policy Institute have supported the idea of minimum wage workers in America earning $15 per hour. An EPI study in February reported that such an increase would actually boost the country's economy.

In Illinois, some 1.4 million men and women earn less than $15 per hour and could benefit from such a raise. And Pritzker seems to be on board with it. "The accomplishment here is nothing more," the governor said on Tuesday, "and nothing less than historic."

More like this
What Is Ben Affleck's Net Worth? At 50, The Oscar Winner Makes 8 Figures Per Film
By Meg Walters
A Political Thriller Inspired By The Munich Massacre Is Coming Soon
By Darshita Goyal
Why Eurovision 2023's Host City Won’t Be Revealed For A While Yet
By Sam Ramsden and Rachel Mantock
Christina Aguilera Took A Powerful Stand At Brighton Pride
By Sam Ramsden
Get Even More From Bustle — Sign Up For The Newsletter