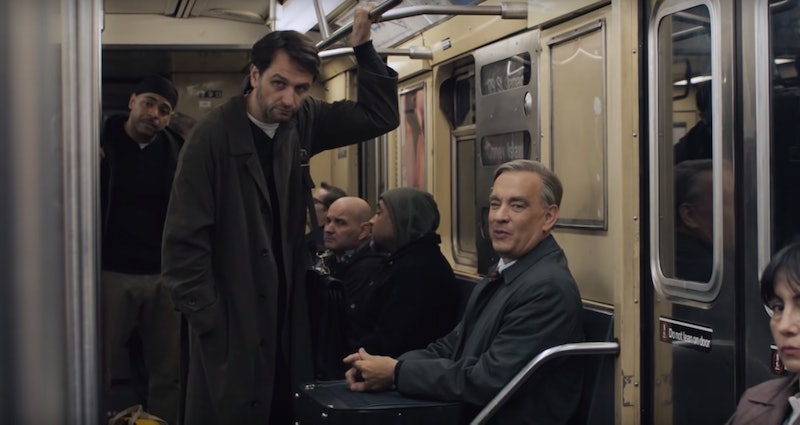 A Beautiful Day in the Neighborhood (opens Nov. 22) tells the story of one writer's experience profiling Fred Rogers, otherwise known as Mister Rogers, the host of Mister Rogers' Neighborhood. While the film does look at the burgeoning friendship between Rogers (Tom Hanks) and writer Lloyd Vogel (Matthew Rhys), it focuses primarily on Vogel's personal life and how much it has been impacted by this newfound friendship. What's more, it's based on a true story, with a few of the names changed. In actuality, A Beautiful Day in the Neighborhood's Vogel is journalist Tom Junod, who profiled Rogers for Esquire in his 1998 piece "Can You Say...Hero?" Over 20 years after its publication, Junod, now a senior writer for ESPN, has come forward to share more about the lessons he's learned from Rogers, and how he's reconciled them with his feelings about A Beautiful Day in the Neighborhood.

Per his piece in The Atlantic, Junod asked the writers for some changes after reading an early draft of the script in April 2016. He wrote, "I wrote Micah [Fitzerman-Blue] and Noah [Harpster] back, along with Peter Saraf, the producer at Big Beach, the company that had optioned my Esquire story, and asked them to change my name and the names of my family members. And that’s how I became Lloyd Vogel." Explaining why he wanted the changes, he wrote that it wasn't because he disliked it or disagreed with its premise. It had more to do with his relationship to his own father, which was a focal point for the film. He wrote, "I was well aware of his eccentricity, but unlike my character in the script, I had never rejected him or his message, which was that nothing is more important about a man than the way he looks, the way he carries himself, and the mystery of what my father called his 'allure.'"

In fact, Junod's current project is a book about his relationship to his father, Lou Junod. He told the Atlanta Journal-Constitution, “I idolized him. I wanted to be him." However, he also said in the Atlantic piece that his father was a flawed man, "a fetishist of his own fragrant masculinity." He explained how his friendship with Rogers contrasted that image, writing, "Fred gave me what I needed then and still need now: a choice. He allowed me to choose between two visions of manhood, a choice I suspect I’ll have to continue making for the rest of my life, which is why I’m writing my book and which is why I asked the producers of the movie to change the names."

Junod had hoped the changes would bring protection, as he wrote, "I had counted on the plot’s many departures from my life to insulate me from the emotional effect of seeing some version of myself up there." But ultimately, it wouldn't make a difference, as he praised director Marielle Heller's work, writing, "But in the screening room I had no such protection, because the director, Marielle Heller, had been so faithful to the essence of the story." It's this faithfulness to the essence of Junod's story that makes A Beautiful Day in the Neighborhood so intriguing, and it will be even more interesting to see how the film goes about achieving that faithfulness.