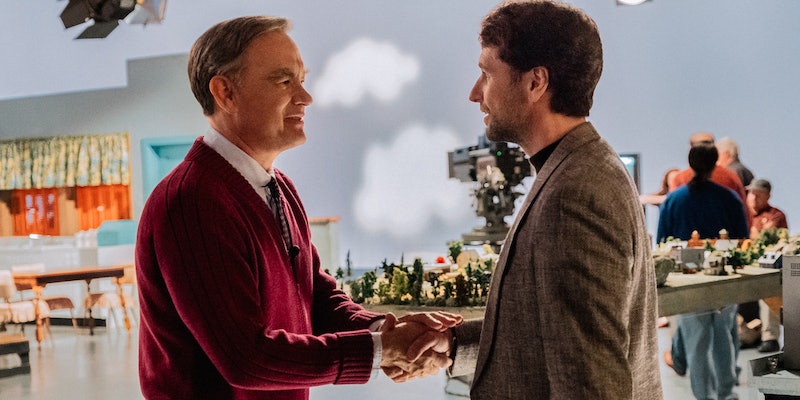 Despite what you may have assumed, A Beautiful Day in the Neighborhood is not a Mister Rogers biopic. The legendarily kind and patient children's TV presenter, as played by Tom Hanks, isn't even the main character of Marielle Heller's new film, which had its world premiere at the Toronto Film Festival Saturday night ahead of a theatrical release date of Nov. 22. That role is filled by Lloyd Vogel (Matthew Rhys), an investigative reporter who isn't initially thrilled by the "puff piece" assignment of profiling the host of Mister Rogers' Neighborhood and is loosely based on Tom Junod, author of the 1998 Esquire piece, "Can You Say...Hero?" But in illustrating how Fred Rogers' warmly penetrative gaze helps one man escape an emotional prison of his own making, A Beautiful Day in the Neighborhood demystifies the icon... as much as it's even possible to do so.

"[Mister Rogers] says he’s fallible. It’s fine to be fallible," Rhys says, sitting in a vast, wood-paneled hotel ballroom in Toronto that's humorlessly incongruous to the famously stripped-down life of the man he's describing. "That’s what you’re allowed to do. You’re allowed to make mistakes. [Being a good person] is hard, you have to work at it. And you go, 'Oh, that’s achievable.'"

During a Q&A after the film's premiere, Heller told the audience that Rogers' wife Joanne had shared that the family didn't like Rogers to be referred to as "a saint," because, in that case, what he stood for was unattainable. It's a sentiment that makes it into the film and provides Lloyd with some of the inside perspective he's looking for. He approaches the assignment with typical ferocity, mining for the cynical underbelly of a man who made a whole career of making other people feel understood. It doesn't take long for Fred to spot Lloyd's deep inner pain — the fact that he shows up to the first interview with a busted nose is a pretty big clue.

Early on, Lloyd tries to delineate the Mister Rogers persona from Fred Rogers the man, and his subject stares at him like he's speaking an alien language. As they continue to meet and talk, Lloyd, who's dealing with the reemergence of an absent father (Chris Cooper), is on the receiving end of Fred's guerilla empathy (including a session of puppet therapy with King Friday the 13th and Daniel Striped Tiger), which embarrasses and confuses him. Fred doesn't treat adults all that differently from children, and it's not easy for Lloyd to get used to. He's constantly looking for the proof that Mister Rogers is a character.

"You’re looking at it through Lloyd’s eyes. He’s going, 'Are you kidding me right now? Is this seriously happening?'" Heller tells Bustle of a scene where Fred meets fans of all different ages on a New York City subway, and they honor him in a remarkably pure rendition of "Won't You Be My Neighbor?" Heller acknowledges the inherent humor of seeing someone like Fred Rogers be so resolutely himself in a world that — we seem to believe — doesn't reward people like him. That, and his "odd coupling" with Lloyd, who just doesn't buy it at first.

Although Rogers passed away in 2003, Rhys was able to speak to Junod about the five year friendship they shared before he died, including its tense beginnings. The actor brings up the journalistic tactic of letting silences stretch out in interviews, which often leads to a more honest, less practiced answer. He says that Junod told him once that "time" was the key to doing his job well. "Because ultimately, people will talk ... When [Junod] met Fred, he was like, 'Oh.' Zen master,'" Rhys laughs. "Tom Junod meeting Fred Rogers, the master of pauses — it must have just been hours of no one saying anything!"

One of the main reasons why the real Rogers was so comfortable in silence and paced his show so slowly is because children need more time to process information, the actor learned in his research. "At first, when I was watching [the show] out of context of understanding that, you go, 'Oh, something’s gone wrong. He’s waiting for a cue,'" Rhys says. "Now you look back and you think, 'What a genius' that he just let kids go, 'Huh. Yeah, yeah, you’re right.'"

Hanks, meanwhile, "works at a million miles an hour," so to watch him slow down to Rogers' speed "tickled" his costar. Lloyd, on the other hand, squirms under Fred's calm scrutiny, which only seems to make the host more determined to help him.

It's perhaps blasphemous to even say, but the film shows that being a friend of Fred Rogers — someone the entertainer took a special interest in — couldn't have been easy. Fred forces Lloyd to be present, and that comes with moments of catharsis, anger, and sadness. It changes his life, but he has to do the work to get there. Fred never recedes into the background of his life or lets Lloyd off the hook. Junod, who attended the TIFF premiere, told the audience at the post-screening Q&A that he would receive dozens and dozens of lengthy emails from Rogers over just a few months. It's a lot of pressure to live up to Mister Rogers' expectations of you — even when he likes you "the way you are right now."

There's a moment in the film where Hanks as Fred breaks the fourth wall, and you the audience are also challenged to take stock of your choices and your feelings. It's clear that the process of making the film encouraged everyone involved to do the same.

"I think men of my age who had fathers of a certain generation... I could relate to the inarticulacy of our emotional vocabulary," Rhys says. "But there’s a number of us who don’t talk about the way we feel."

"I’m a pretty, neurotic jaded person in certain ways and on the other hand, I'm also an incredibly sensitive person who feels very protective of Fred," Heller says. "So it’s been this funny thing, where I feel like these two men are two sides of me. I want to be like Mister Rogers. I want to be more Fred-like. But parts of me were very Lloyd-like."

On the night of the premiere, however, the director received a note from Joanne Rogers with a compliment that makes her tear up as she recounts it to me. "She wished I’d known Fred, because she really thinks we would have had great conversations," Heller says.

Because the magic of Mister Rogers, of course, is that he didn't want everyone to be like him — just to be the best versions of themselves. A Beautiful Day in the Neighborhood may inspire you to try just a little bit harder.