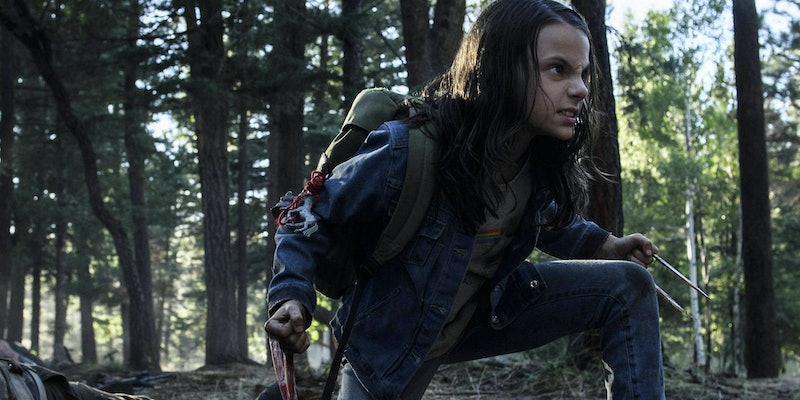 When I was growing up, I wanted to be Buffy Summers. As a way-too-young-for-it-but-my-parents-let-me-watch-anyway superfan of the WB show, I worshipped everything about the Vampire Slayer: her wit, her powers, her total, badass control over every situation and every problem she faced. She — and Xena, and Katniss, and Trinity, and Sarah Connor — was the kind of strong, smart, skilled woman I hoped to become. But while I loved these characters, my nine-year-old self felt disconnected from them; they were all older than me, teens or women I admired, but didn't see myself in them just yet. I didn't have a tween heroine to care about, to see myself in right then — which is why the fact that the action hero of the new X-Men movie Logan is Laura, a preteen girl, matters so much.

Although Hugh Jackman's Wolverine is technically the star of Logan, it's Laura (Dafne Keen) who's truly the main event. The pint-sized tween doesn't say more than a few words during the first two-thirds of the movie, but she growls, screams, and claws her way into viewers' hearts from the very start. She's cute and charming, whether she's shoplifting sunglasses or downing cereal, but more than that, she's a powerful, skilled fighter, a mutant who's learned through tragedy that she must fight hard if she wants to survive.

As a 20-something woman watching Logan, I love seeing such a physically and emotionally strong girl on-screen. As we all know, female representation in film is distressingly low; women made up just 22 percent of protagonists in 2015's top 100 grossing films, according to a 2016 report by Center for the Study of Women in Television & Film. Having a female character not only be a huge part of a major Hollywood movie, but be so complex and developed, is a major deal. And having her be capable of defending herself from any thing or person that comes in her way? That's just icing on the cake.

But the fact that Laura is a preteen is what makes her so unique. While it's great that characters like Buffy and Sarah Connor exist, they're all grown up (or at least in their teens, which can feel all grown up to an eight-year-old viewer). Their lives consist of jobs and responsibilities, romance and big milestones. They may be brave, and bold, and badass in every way, but they're adults; while young girls can certainly admire these characters, they can't relate to them, or see themselves in them.

Laura, though, is an actual tween (albeit one with some very special abilities), and for Logan's youngest viewers, that has a huge impact. For many of these girls, this movie might be the first time they see someone their own age doing the kind of action that they'd only previously seen from teens and adults (the few times women are even able to get in on big screen action). Instead of idolizing on-screen characters for being the kind of women they'd one day like to become, they can admire Laura for being the kind of girl they already are, or know they're capable of being.

Growing up, I didn't get to have a character like Laura, or Stranger Things' equally badass Eleven, for that matter, in my life. There were the Powerpuff Girls, yes, but they were animated, and so the effect was minimal. And there was Hermoine Granger, of course, but her prowess came more from knowledge and wit, not action scenes and fight skills. I needed an on-screen heroine who was strong, and fierce, and unyielding, a girl who was only nine or 10 or 11 years old, but could take down an army of bad guys without breaking a sweat. I needed an icon my own age, but she just didn't exist.

Now, though, she does. For the girls seeing Laura's face on action figures or watching Eleven take over TV trailers, the effect will be huge. A 2017 study by NYU researchers found that girls are impacted by gender stereotypes as early as age six, and so much of the media they consume is male-dominated and often unkind to women. Young girls are impressionable, and self-esteem can be fragile; giving preteen viewers heroines their own age on-screen to watch and worship could not be more important.

When I watched Buffy as a kid, it gave me confidence. I saw a character who battled demons and defeated her enemies, and made it clear that, just like men, women are filled with strength and capable of great things. But I could only imagine what my life would've been like if I had a character like Laura to look up to, too. I wouldn't have to wait a few years to become the kind of woman I wanted to be — maybe, just maybe, I would've realized I had that power within me already, and that being a preteen didn't mean I couldn't save the world, too.