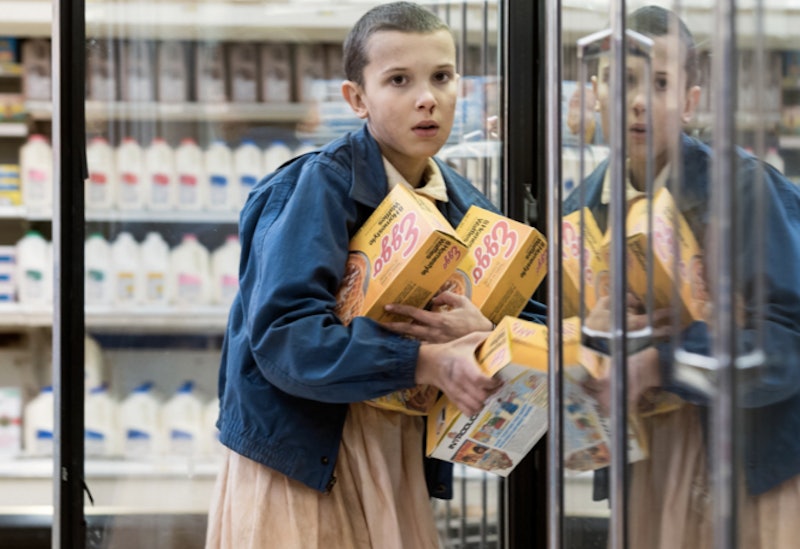 In news that is unlikely to shock anyone, TVLine is reporting that Millie Bobby Brown will be returning to Season 2 of Stranger Things as Eleven. While fans have been expecting this announcement for some time, as Brown was one of the breakout stars of the Netflix show, it poses a lot of questions about where the series is heading following the events of Season 1. As anyone that's watched the series will know, Eleven appeared to die at the end of Stranger Things in order to save her friends. After saying goodbye to Mike, she disappeared into the ether, taking the Monster from the Upside Down with her. So where is Eleven in Stranger Things Season 2? We need answers.

In August 2016, show creators the Duffer Brothers told Entertainment Weekly, “We don’t know about Eleven. We leave that up in the air.” Clearly, they weren't done with the character, and felt that her fate had been left open-ended enough to bring Brown back in her role that helped define Halloween costumes in 2016. (Though it's worth noting that Netflix has yet to confirm this at all.) Does this news mean that Eleven isn't dead after all? Is Eleven now in the Upside Down? Or will Eleven only appear in flashbacks when Stranger Things returns? Here are just some of the possibilities regarding where Eleven might be.

1. Eleven Is Stuck In The Upside Down

Eleven is no stranger to the Upside Down, and communicates with its inhabitants on several occasions. Perhaps her powers transported her and the Monster back there at the end of Season 1?

It's possible that Eleven will only appear in flashbacks during Stranger Things Season 2, perhaps as the backstory of the characters gets explained in more detail.

3. Eleven Is The Monster

Several theories suggest that Eleven could actually be the Monster from the Upside Down, and the devastation caused throughout Season 1 is all down to her. This would explain why she's the only person who can control the Monster, and why the Upside Down looks so different through her eyes — it's a black empty space rather than a creepy wood.

4. She's Hiding In The Woods

At the end of Season 1, Hopper was seen leaving food in a storage box in the woods, including El's favorite food, Eggo Waffles. Does this mean that Eleven is Hopper's daughter after all? How else would he know that she liked Eggos? And is he leaving food for her because she's still alive but in hiding? It certainly seems possible.

It's amazing news that Brown will reportedly be back in Season 2 of Stranger Things, but unfortunately we'll have to wait until 2017 for new episodes of the Netflix show.