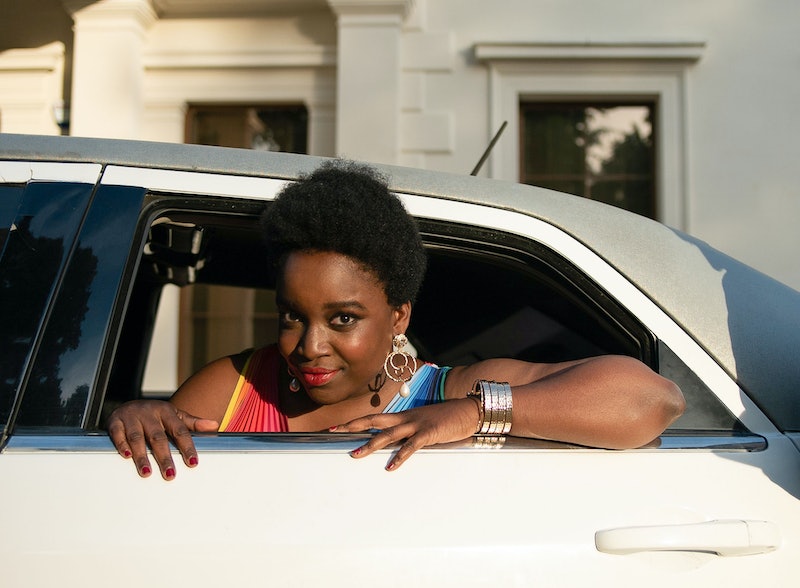 Fresh from her role in hit BBC comedy Ghosts, actor, writer, and comedian Lolly Adefope has created a new short comedy Sorry. The show will tap into important conversations around the realities of stardom. And if Lolly's previous work is anything to go by, Sorry will be absolutely hilarious.

The story follows Dolly Adesina, an actor described as the "black Jennifer Lawrence" who is teetering on the edge of stardom. Viewers meet her on the way to the London premiere of her first ever Hollywood film. During the journey there, Dolly finds out she's trending on Twitter and for all the wrong reasons, potentially putting her blossoming career in jeopardy. Sorry explores themes of "intent, regret and redemption, and asks the question: who gets a second chance?"

The comedy will also star Sally4Ever's Catherine Shepherd, Ackee and Saltfish's Babirye Bukilwa, About Time actor Joshua McGuire, and up-and-coming comic talent Phillip Dunning, to name a few. In a statement Adefope shared her excitement about the new show. "I'm so excited to be making a comedy short for BBC iPlayer, and especially excited by the opportunity to really get out of my zone by playing an actress who gets into trouble for something she tweeted!” she said.

Damian Kavanagh, Executive Producer of Sorry said of the new launch: “The team at Tiger Aspect are beyond excited to be working with the exceptionally talented Lolly on Sorry and helping her to bring her wonderful creation to life for audiences to enjoy.”

The stand up and actor is known for her character comedy. Recently she played Kitty, a Georgian noblewoman in BBC's Ghosts, a comedy series created by the brains behind Horrible Histories. The show, which came out earlier this year, centres on a young couple living in a haunted country house with a number of hilarious ghosts from different time periods in history. Other than Ghosts, Adefope has also appeared in the Hulu series Shrill, Mission: Impossible - Fallout starring Tom Cruise, This Time with Alan Partridge, Rovers on Sky, and Channel 4's Damned.

The new short is one of four mini comedies coming to the BBC this year. Mandy is the directorial debut from Diane Morgan, better known as hilarious Philomena Cunk, who will also be taking on the main role. Then there's Lazy Susan starring duo Freya Parker and Celeste Dring, adapted straight from a sell-out show performed at Edinburgh Fringe Festival and the Leicester Square Theatre. And lastly, flat-share comedy Brain In Gear written by and starring Gbemisola Ikumelo who appears in BBC's Famalam. BBC comedy shorts in the past have gone on to receive BAFTA nominations, so watch out these four comedies could be next.

With social media ever-growing, the internet never forgetting, and the era of "cancel culture where celebrities are held accountable for their prior actions still alive and kicking, Sorry feels very relevant to our times. Hopefully, we'll see more comedies written by the very talented Adefope in the near future.