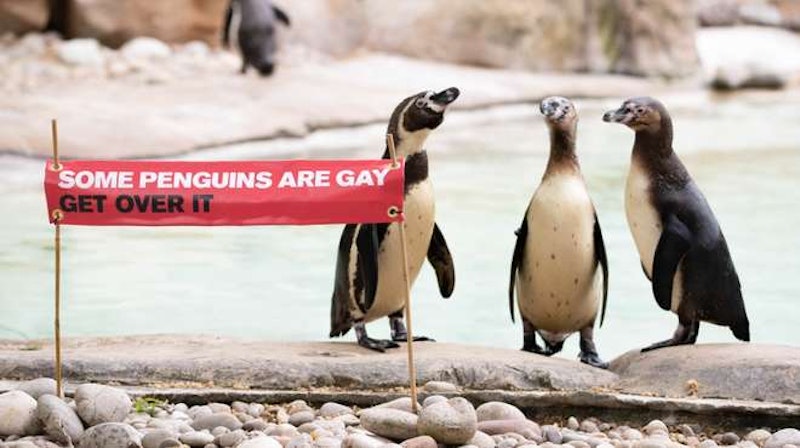 Finding your mate is super tough work. It seems a bit easier for animals right? It's just a part of their destiny. They are born, they find a mate (or several) and more sweet baby animals are born. That's nature's way, or is it? Nope. Y'all, increasing evidence is showing that animals can be gay too. And in one particularly adorable case they are even getting their very own pride celebration in honour of their love. Bring the tissues because ZSL London Zoo is celebrating its gay penguins for Pride and in terms of adorable — this might tip you over the edge this morning.

Yes guys, love has no gender. Especially not in the world of cute AF animals who aren't judgmental. Also ones as well dressed as sweet little penguins in their tiny suits.

The zoo's famous gay "it" couple are a pair of Humboldt penguins called Ronnie and Reggie. Which is a pretty dark name situation considering they are called after the infamous Kray twins but this pair aren't twins or criminals. Apart from stealing each other's hearts, am I right?

In honour of their sweet love the zookeepers have made a special little banner that says "Some penguins are gay. Get over it." An homage to the famous slogan from LGBTQIA+ charity Stonewall's anti-homophobia campaign.

According to the ZSL London Zoo website, the couple fell in love back in 2014. They quickly became queer icons, and became even more celebrated when they adopted an abandoned egg. Yes, they flipping looked after an egg that had been ignored by its parents. They co-parented the little chick called Kyton to such a high standard that he grew up strong, healthy, and was able to leave the nest. The couple don't have empty nest syndrome as they have each other and are very loved up and happy together. I mean, according to the ZSL London Zoo website they are often found having a cuddle.

It must be hard for them though, being the only gays in the penguin beach. Well get this y'all, they are not the only effing gays. There are 91 other penguins living in their home and two other couples — Nadja and Zimmer, and Dev and Martin — are also flying the flag for queers in the penguin world. Also, a little babe who hatched during pride season last year was called Rainbow in honour of the celebrations. So not only is it Pride, but also her first birthday.

As a part of the zoo's famous Zoo Nights there will be lots of pride themed activities. Guests will have the opportunity to learn all about gender and mating in the animal kingdom. In the pride themed talk, experts will inform those in attendance about how normal it is to be gay in the animal world. They are all at it — pandas, goats, giraffes, and then some.

Although the Zoo Nights events aren't family friendly, the zoo will be holding pride themed celebrations on Sunday July 7 for all the family including story telling from drag queens and of course, animals galore.