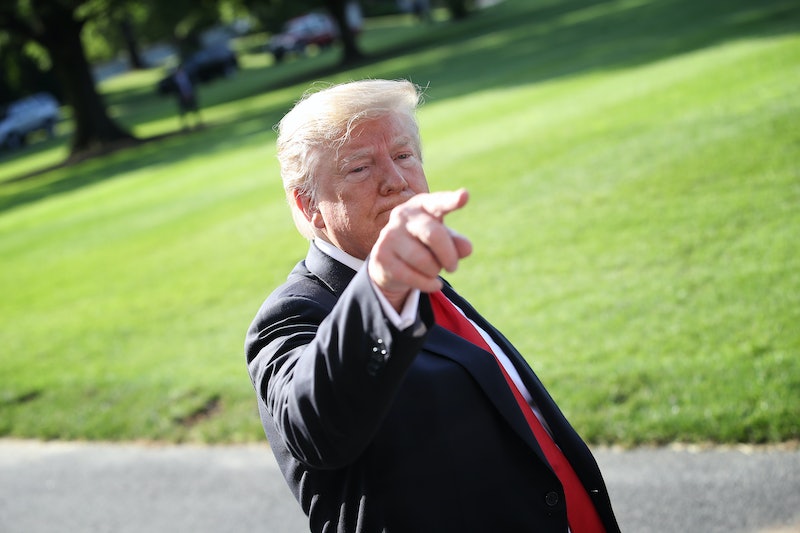 President Trump is about to embark on a trip to the United Kingdom, where he'll be welcomed by the Queen, Prime Minister Theresa May, and other leaders — but one prominent politician does not think it's appropriate to roll out the welcome wagon. Sadiq Khan, London's mayor, called President Trump a 21st century fascist in an op-ed published by The Observer, the sister paper of The Guardian.

The piece calls on May and other UK leaders to retract their invitation to Trump. The president is set to arrive in the United Kingdom on Monday. Bustle has reached out to the White House for comment.

Khan starts the piece by detailing actions that Trump has taken that he objects to. Khan mentioned Trump's "very fine people on both sides" comments about the white supremacists that marched in Charlottesville, Virginia, in 2017 — at the rally where Heather Heyer was run over and killed. He mentioned the family separation policy at the border, the travel ban that prevented people from many Muslim countries from entering the United States, and more.

"No, these are not the actions of European dictators of the 1930s and 40s," Khan goes on to write in the piece. "Nor the military juntas of the 1970s and 80s. I’m not talking about Vladimir Putin or Kim Jong-un. These are the actions of the leader of our closest ally, the president of the United States of America."

Khan also detailed ways that Trump has injected himself into British society, particularly supporting the former Foreign Minister Boris Johnson in the leadership struggle to become the new prime minister when May steps down. "I think Boris would do a very good job. I think he would be excellent," Trump said in an interview with the tabloid paper The Sun on Friday.

Khan compared Trump to Viktor Orbán in Hungary, Matteo Salvini in Italy, Marine Le Pen in France, and Nigel Farage in the UK. He said that Trump was "the most egregious examples of a growing global threat," though, and said the group of leaders was copying "divisive tropes of the fascists of the 20th century to garner support" but using new "sinister" communication strategies to do it.

"The far right is on the rise around the world, threatening our hard-won rights and freedoms and the values that have defined our liberal, democratic societies for more than seventy years," Khan wrote.

"That’s why it’s so un-British to be rolling out the red carpet this week for a formal state visit for a president whose divisive behaviour flies in the face of the ideals America was founded upon – equality, liberty and religious freedom," Khan continued.

Though the president is scheduled to arrive in the UK on Monday, most protests are scheduled for Tuesday, the BBC reports. Not all the details have been made public, but activists have told the news service that they plan to protest Trump's visit. The last time that he was in the UK, tens of thousands of protesters showed up. Other members of Khan's Labour Party — including leader Jeremy Corbyn — have declined invitations to attend events featuring Trump, according to the BBC.

Ending the piece, Khan invokes lessons from the past. "History teaches us of the danger of being afraid to speak truth to power and the risk of failing to defend our values from the rise of the far right. At this challenging time in global politics, it’s more important than ever that we remember that lesson," Khan wrote.

So far, May hasn't canceled.