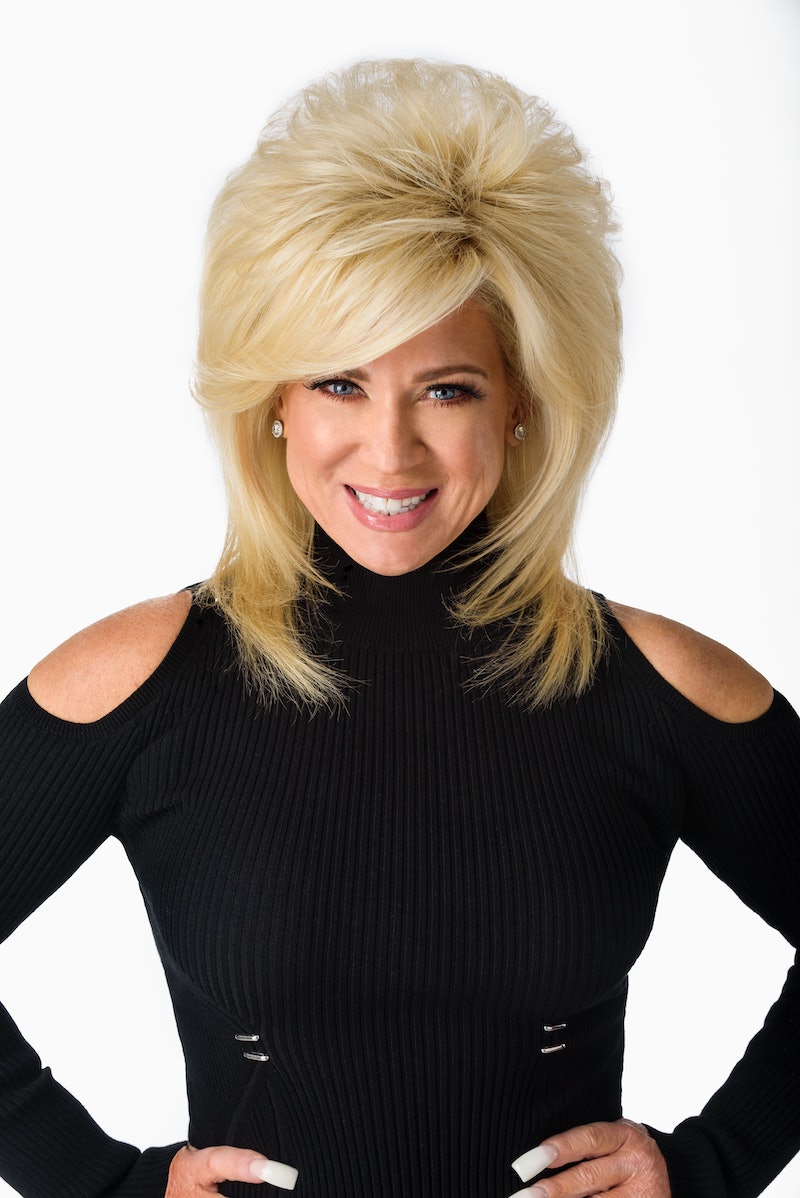 For 13 seasons on TLC, star of Long Island Medium Theresa Caputo has performed countless readings for loved ones of the departed, providing support and helping them grieve. And although no one close to her has recently conceded to the afterlife, Caputo is grieving a major loss of her own — her marriage. On a day off from her national tour, Theresa Caputo Live! The Experience, Caputo shares an honest life update with Bustle after experiencing a year of unexpected trials and change.

After tearing her ACL while on tour in June, she finished out her gigs and returned home for surgery, after which she went back to filming Long Island Medium immediately. "That was really hard to go through," Caputo says over the phone from her Springfield, Missouri, hotel room. She's also now officially in divorce proceedings with her husband, Larry Caputo, after announcing their split last December. These big changes have taught Caputo a lot about dealing with loss.

"One thing that I did learn through this whole thing is that grieving just isn’t for when we lose someone," she says. "I discovered, especially in the last year, that we are constantly grieving. Whether we grieve a job, a relationship — you know I feel like in a sense, I'm grieving my marriage." But not in a negative way — Caputo says she cherishes the 28 years she spent married to Larry.

"Yes, it’s sad, but Larry and I are in a really good place," she says. "And to be able to come out of this and realizing that we both have changed, and that we’re going to honor and respect each other, I’m so proud of that."

Although it's been an intense year for Caputo, those curveballs somehow led to her sitting alone in this midwestern hotel room, forging ahead on her tour. And although the adjustment hasn't been easy, she somehow still manages to see the glass as half full.

"I feel like every experience helps me in a positive way," she says. "That’s the way I live my life. So it is very very important and I feel like I can choose to be negative and sad and handle things in a negative way, but it’s not going to solve anything."

After all, in her line of work, a positive attitude is kind of a must, considering being a medium requires a lot of time spent talking to the dead. In fact, she says her work is one thing that has helped her remain positive in this tumultuous time. It has been her constant variable.

"I think that is one thing that has kind of, you know, made it easier is working, and staying active," she says. "I don’t think people realize, for me, what I do is the farthest thing from normalcy, whether it’s channeling someone who has died or having cameras follow me around all day. It’s almost like it’s always been so comfortable for me. You know, like really validating — this is what I’m supposed to be doing. Things have changed so much in my life, but yet, they’re exactly the same."

Caputo's work may offer some familiarity and stability, but that in and of itself is kind of ironic, considering for her, no two days on the job are alike. Why? Because no two spirits are, either. Caputo says each and every reading she performs is different, so it's hard to choose just one to reflect on for storytelling purposes. Looking back, she settles on two.

"There are so many moments," Caputo says. "Every time I channel someone, it’s changing someone’s life." She recalls delivering a message to a young man at a live show who was the sole survivor of a car crash that killed three of his friends. He was the driver, and for years, he carried guilt for their deaths, and specifically, for being unable to apologize to the family of one of the victims.

"He didn’t know the family that well," Caputo says. "And as the [spirit of the] young man [who had died] was channeling him, he just kept saying [to the driver, through me], 'All you want to do is say you’re sorry to my mom and ask forgiveness,' and then he said, 'Turn around, my mom is behind you.' Now, we were in an arena of 5,000 people. This kid was all the way in the back, I turned around, and up in the bleachers the mother was walking to the floor. And she said, 'That was my son you’re channeling.' And she came down and thanked this young man for remembering her son, and [said] that she did not blame him."

The driver had gone to jail for 18 months for the accident, and the mother of his slain friend not only gave him forgiveness, but told him that she never wished for him to be imprisoned like he was. "It was such a beautiful moment," Caputo says. "How do you compare that to anything? It was this crazy moment of insanity but yet peaceful at the same time. You can’t compare that."

Another one of Caputo's most vivid memories involves a little boy named Shane. "His parents came for a reading and they were getting ready to get divorced because Shane had died, and the mom was blaming the dad," she says. Caputo was able to offer some resolve to both of them through Shane's spirit, and because of that, they remain married today. "They send me a Christmas card every year," Caputo says. "The bottom line is, they gave it their all."

And that's what Long Island Medium is all about — in the face of critics and skeptics, it's about Caputo using her gift to give people the chance at the peace and comfort they deserve. Because the death of a loved one never seems fair, no matter how you slice it.

"It’s not about people believing in a medium, or even in what I do," she says. "I want them to believe in themselves. I want them to have an experience that validates that what they’re experiencing or feeling is real, because at the end of the day, if spirit has me talk about things that you witnessed, that you saw with your own eyes, and that you heard from them since they died, nobody can tell you that wasn’t real. And that’s what spirit does. They’re talking about things that only you would know about. So you could be a skeptic, but you can’t deny the fact that what spirit is talking about is real."

And for Caputo, she really doesn't care if you believe in what she does. She just wants to provide comfort to the people who will let her. She says that, in her experience, most of the major skeptics she has encountered are, to put it simply, afraid.

"How many times do they say to me that they don’t believe in what I do, but then, after having an experience with me, then they start sharing with me how they’ve connected with spirit?" she says. "It’s hard to believe in an afterlife. Yes. What is it? What does happen to the soul? Are we just floating around? Is there a heaven? Where is heaven? Is it in space? Is it in another dimension? We have so many questions. So I always say to people, we’ll find out when we get there. And you know what, if there is nothing, then we're not gonna know about it. This is giving us the peace and the comfort to live our lives out here in the physical world." And that, in and of itself, should be enough.