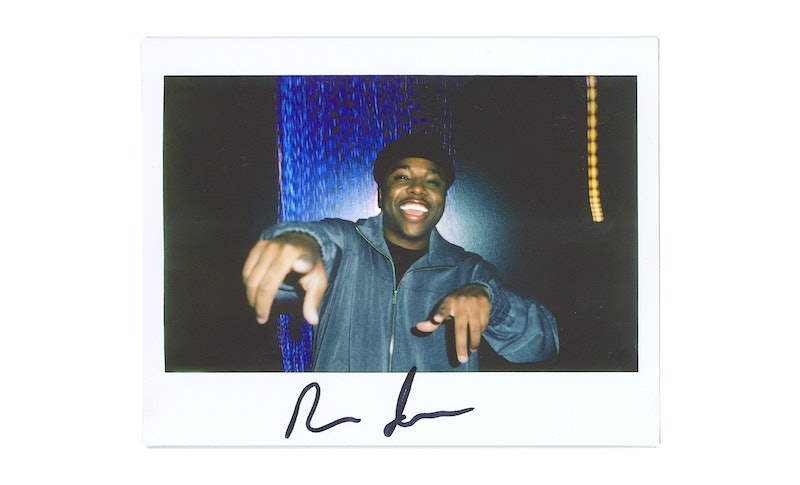 When celebrities hang out with Bustle writers, we want to give them the chance to leave their mark. Literally. So we hand them a pen, a piece of paper, a few questions, and ask them to get creative. This time, Looking for Alaska star Denny Love is leaving his mark in the Bustle Booth.

The first person Miles meets when he arrives at his new boarding school in Hulu's Looking for Alaska is Chip Martin, who goes by the nickname the Colonel. He takes Charlie Plummer's Miles — and by extension the viewer — under his wing and introduces him to his group of like-minded outsiders at Culver Creek. But though it takes less than one episode for viewers to be introduced to The Colonel, you likely haven't yet been formally introduced to Denny Love, the charismatic actor who plays him.

Though Love has appeared in smaller roles on shows like Empire, Lucifer, and Chicago P.D., Looking for Alaska marks Love's first time being front and center in a project. Not that you would know it — he inhabits the Colonel's charisma with effortless, scene-stealing energy. But before the Madison, Wisconsin, native discovered his flair for the dramatic, he was focused on basketball and goofing around.

"I was always kind of the class clown," Love tells Bustle. "I was always just cracking jokes, just being myself." It wasn't until he reluctantly took a high school theater class — because he heard it was an easy A — that a teacher realized his potential and eventually convinced him to try out for a school play. He ended up auditioning for The Miracle Worker, which tells the story of Hellen Keller. "I kind of felt this light," Love says of his first audition. "I kind of felt like I was just in the right place."

When he chose to pursue acting instead of basketball, his family was ultimately supportive. In the years since, he's also dabbled in stand-up, which helped him embody a goofball like the Colonel. "A lot of the [Looking for Alaska] book is already written so funny," the actor says, "and the dope thing about Chip is he is the comic relief for a lot of the show." But the Colonel is more than simple comic relief — he's also a complex character in his own right. Love says Chip is both "a funny and angry person," and he was interested in figuring out where his anger came from, since he deeply relates.

"For a lot of time when I was a kid, I had anger issues," he says. To embody Chip, Love searched for the humanity in him. "That's how we deal with most of our problems, by laughter," he adds. "The happiness that's emitted from laughter is always incredible to me." Thanks to Love's performance in Looking for Alaska, plenty of happiness awaits.

Learn more about Denny Love in his Bustle Booth questionnaire below.