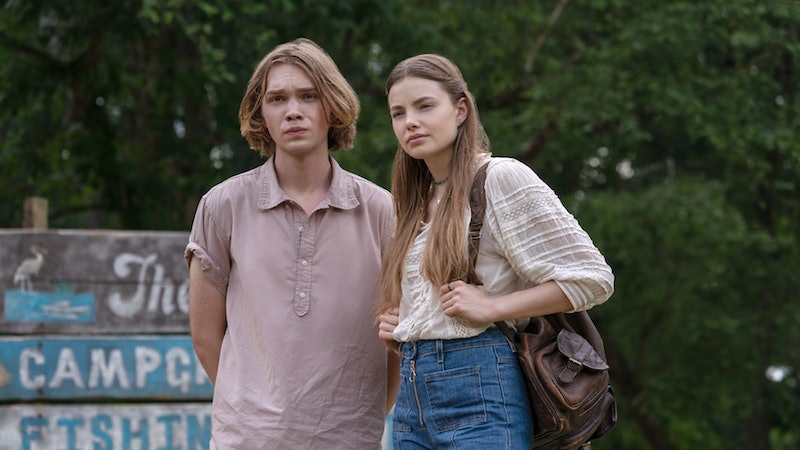 Hulu's new limited series is set to delve into some heavy topics when it premieres on Oct. 18. The latest trailer for Looking For Alaska highlights the main character's mental health journey in a way that suggests the adaptation of John Green's beloved novel is set to make a smooth transition to the small screen. Alaska, played by Kristine Froseth, takes center stage in the latest trailer, and her musings on suffering and "escaping the labyrinth" add weight to the underlying tragedy that's set to rock all of the characters' lives.

Looking For Alaska follows a young man named Miles "Pudge" Halter (Charlie Plummer) as he starts boarding school in Alabama. Along the way, he makes friends and falls hard for Alaska. The trailer plays up the idea that Miles sees her as the ultimate cool girl, but it soon becomes clear that she is dealing with mental health issues that may lead her to make a dangerous decision. At one point, one of Miles' friends says, "She made us accomplices, Pudge, and we have to live with that for the rest of our lives." The exact nature of what Alaska does remains a mystery, but even without specifics, it's clear that her journey is going to be complex.

In a July interview with Deadline, executive producer Josh Schwartz shared the crucial way that TV Alaska will differ from book Alaska. While Green's book is iconic, it does largely view the character through the lens of the male gaze since everything is seen from Miles' perspective. The limited series isn't confined to a single viewpoint, which will allow Alaska to become even more fully realized than she is on the page.

"We're incredibly faithful to the material, but we've also taken great efforts to go further and deeper," Schwartz told the outlet. "For fans of the book, they will feel we've really honored the material. The book is really about the limited male gaze and we wanted to make sure that Alaska exists in her own right. The audience will have understanding of her character and she won’t exist only as a mystery, hopefully that will go some way to remedy that."

Demystifying Alaska should also make her mental health journey more explicit. The book is often hailed for its realistic depiction of depression, and by including private moments with the character that aren't from Miles' point of view, the series can fully delve into Alaska's emotional state. "We made sure she felt human, a regular teenager and added in a lot of private moments that help show that," Froseth told Deadline of her character.

Looking For Alaska appears to be a thoughtful teen drama that's unafraid to delve into tough topics. The latest trailer definitely hints that there's a layer of tragedy in this coming of age tale about a boy seeking his "great perhaps." And while it may prove to be a heavy series to marathon, Alaska's journey and how it affects her friends may also make the show an important watch.

More like this
Netflix Shut Down 'Bridgerton' S3 Rumours About A “Very Dark” Storyline
By Bustle
Everything To Know About The 'Daisy Jones & The Six' TV Series
By Maxine Harrison and Brad Witter
The Song At The End Of 'The Last Of Us' Ep 1 Has A Deeper Meaning
By Sophie McEvoy
Your Guide To Watching 'Everything Everywhere All At Once' In The UK
By El Hunt and Sophie McEvoy
Get Even More From Bustle — Sign Up For The Newsletter
From hair trends to relationship advice, our daily newsletter has everything you need to sound like a person who’s on TikTok, even if you aren’t.