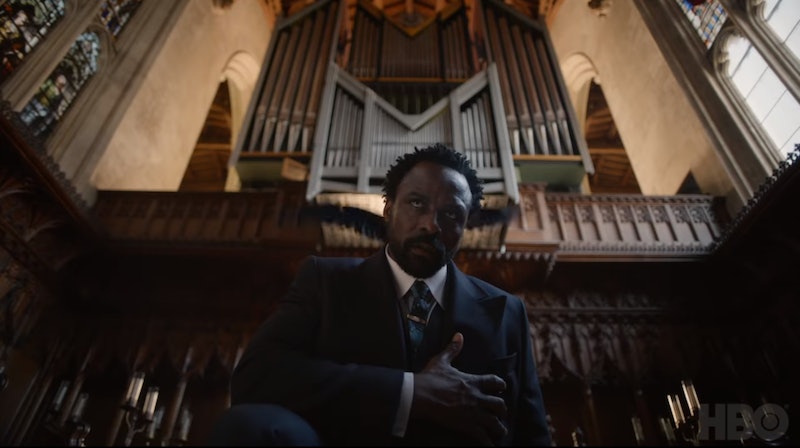 If you've been captivated by HBO's production of His Dark Materials but you've never read Philip Pullman's book trilogy on which it's based, you may be struggling to get your head around the characters and how they function within the fictional universe. While we've only had a relatively minor glimpse of him on screen thus far, Lord Boreal is a key antagonist in His Dark Materials, particularly in the second book of the series, The Subtle Knife.

Fans of the book will have been surprised to see so much of Lord Boreal across the first two episodes of the HBO mini-series, especially given how small of a role he plays in the first book. Episode 2 in particular is a major departure, as we're offered a view into our world as the character crosses over from Lyra's Oxford, something that doesn't happen in the novels until The Subtle Knife. It's a convenient way of getting the audience more accustomed to Boreal early on, which would make it more of a natural transition when the series begins covering the main events of the second book presumably in Season 2. But it is a marked difference from how things play out in Pullman's novels.

Lord Boreal, played by Ariyon Bakare in the new series, first encounters Lyra Belacqua (Dafne Keen) in the His Dark Materials novels at Marisa Coulter's (Ruth Wilson) cocktail party, which he's invited to attend as one of her associates. There, Lord Boreal and Lyra have a brief discussion about the General Oblation Board, also referred to as The Gobblers, the organization responsible for kidnapping children, though the purpose for this isn't immediately known.

They also talk about the elementary particle Dust, which will play a major role in the events of the series. He's written to be somewhat predatory at this stage and offers to "help" Lyra, an offer she quickly refuses. That's the last time Lord Boreal is mentioned in The Northern Lights, the first book in the His Dark Materials trilogy.

The next time the two meet is in Cittàgazze, a city in the parallel world of Will Parry, a 12-year-old boy Lyra befriends in The Subtle Knife. While looking for more information about Dust at the Pitt-Rivers Museum, Lyra encounters Lord Boreal, posing as Sir Charles Latrom. He seems vaguely familiar to her, but she's unable to place him and accepts a ride from him, only to later realize that he's stolen her alethiometer, or truth-telling device.

In order to get it back, Lord Boreal forces Lyra and Will to look for an important knife in Cittàgazze. They manage to find it by defeating its current owner, who reveals that the knife is powerful enough to cut through the fabric between universes, making it incredibly powerful. They use it to cut a hole directly into the home of Charles Latrom, where they discover his true identity and successfully steal back Lyra's alethiometer before making a quick escape.

Not long after, Latrom visits the Dark Matter Research Unit and asks the lead researchers, Oliver Payne and Mary Malone, to zero in on learning how to use dust to control human consciousness, though his purpose for this is never made clear. While Malone turned Latrom down immediately, Payne contacted him privately after he departed.

Unfortunately, the two never get a chance to work together as soon after, Marisa Coulter manipulates Lord Boreal into revealing everything he knows about the knife and its power. She thanks him by poisoning his drink and killing him.

It's unclear just how much Lord Boreal knew about Lyra's existence and her fate. For instance, was he aware that Lyra was Marisa Coulter's daughter? Did he know that she was the second Eve? While he did briefly mention wanting to use Spectres, the dark spirits that have a hold over Cittàgazze, to similarly defeat other worlds, though again, to what end is unknown. Much like his character in the TV show.

While HBO has taken some liberties in adapting the books, Lord Boreal's character remains vital to the story. And likely will be going forward.

More like this
Netflix Shut Down 'Bridgerton' S3 Rumours About A “Very Dark” Storyline
By Bustle
Everything To Know About The 'Daisy Jones & The Six' TV Series
By Maxine Harrison and Brad Witter
The Plane Crash In 'Dear Edward' Is Based On A 2010 Tragedy
By Grace Wehniainen
'Wednesday' Star Emma Myers Thinks A Wenclair Storyline Is “Possible” In Season 2
By Alyssa Lapid
Get Even More From Bustle — Sign Up For The Newsletter
From hair trends to relationship advice, our daily newsletter has everything you need to sound like a person who’s on TikTok, even if you aren’t.