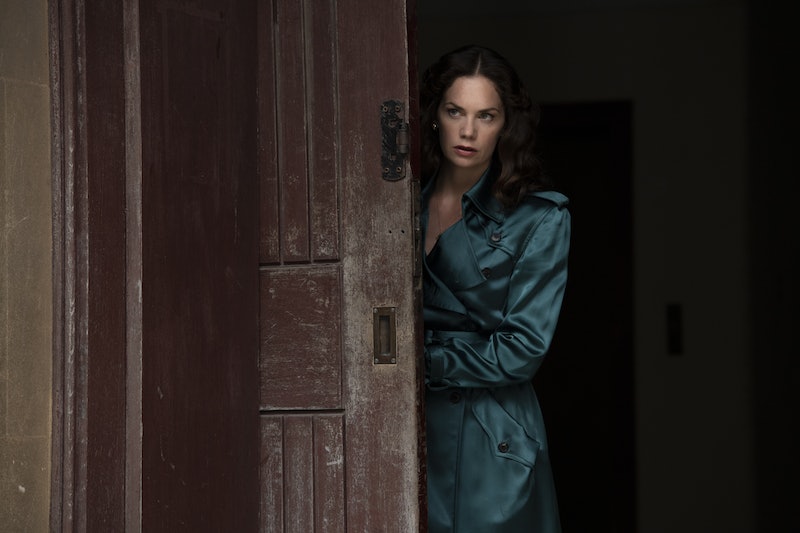 Spoilers for His Dark Materials ahead. Lyra is right to be nervous about the journey she's embarking on with the mysterious lady so eager to whisk her away from home. Even in a fantasy world, unpaid internships come with a price. As His Dark Materials will surely reveal soon, Mrs. Coulter is the complex villain of Phillip Pullman's world, and also Lyra's mother. Ruth Wilson's character may seem sweet now but she's seriously scary.

When Mrs. Coulter arrives at Jordan College, Lyra is immediately taken by her status and style. She offers Lyra a position as her research assistant, apparently on the request of the Master who was (up until then) serving as Lyra's guardian at Oxford. Unlike Lord Asriel, Mrs. Coulter actually wants to take Lyra away on an adventure — and at the end of the episode Lyra is off to London with her.

Lyra tells Mrs. Coulter that she's worried the "gobblers" have her friend Roger, and Mrs. Coulter responds with faux concern and blatant lies. The term "gobbler" is short for the "General Oblation Board," which Mrs. Coulter leads. They're stealing children all over England to use as experimental subjects. Mrs. Coulter promises to find Roger for Lyra, but trust that she has absolutely no intention of freeing him.

While Mrs. Coulter appears friendly and kind on the outside, her mean golden monkey daemon betrays her true nature.

The Master of Jordan College seems to know that Mrs. Coulter cannot be trusted, by the way he insists that Lyra hide the alethiometer from her. "She has a part to play in all of this," the Master says, "the irony is that she has to do it all without realizing what she's doing." Of course. His shady actions are all very Dumbledore, sending Lyra off on an adventure while deliberately withholding information in the name of "destiny" and "prophecy," even though His Dark Materials books pre-date the Harry Potter series by two years.

Apparently, the alethiometer (a magical truth-telling device also known as "the golden compass" in Pullman's novel) guided the Master's decision to send Lyra away with her mother. There's actually a double Star Wars-ian parental reveal coming. Not only is Mrs. Coulter secretly Lyra's mother, but Lord Asriel is actually her father — not her uncle, as she was raised to believe. The passionate love/late relationship between Mrs. Coulter and Asriel is a big part of this story. Both are interested in the study of Dust and the existence of other worlds, but have opposing points of view.

She also appears to know the mysterious Lord Boreal — who was sent by the Magisterium (evil Church headquarters) to spy on Lord Asriel in the first episode. However, Lord Boreal's contact at the Magisterium doesn't want Mrs. Coulter to know what they are plotting, even though she technically works for him as well.

"She's fairy godmother and the nasty queen," described Ruth Wilson in an HBO special feature. "Snow White and the Wicked Queen." This woman has so much power, but nobody trusts her. It almost makes her sympathetic as a female character... if, you know, she weren't the one kidnapping children and performing inhumane experiments on them.