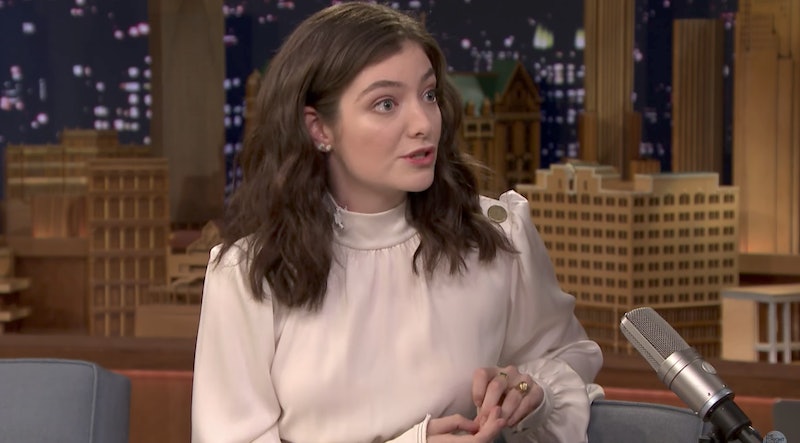 Would you sell your soul for a slice of fame? Well, maybe mull over that deal one more time with feeling, because Lorde has confirmed the onion ring Instagram account is hers — and has now deleted the account. In a story that makes being a celebrity sound, well, awful, after New Zealand news outlet, Newshub, started gathering evidence that the Instagram account @onionringsworldwide was started by none other than the country's most famous singer, Lorde confessed on the Tonight Show with Jimmy Fallon that yes, that is her hobby and yes, she's deleted her secret onion ring account.

“I sort of naively didn’t realize it would be a thing... I was going to different places and trying the onion rings at each of those places… It was me, it was me, it was me," she said. “I feel like it kind of reads like the kind of thing a pop star would do to look relatable, which I wasn’t doing. It was like a funny thing with my friends on the tour and I was like, this is a good pastime.”

The fact that the 20 year old has to even think about this stuff, rather than the really important issues at hand (like which Instagram filter lends itself best to the golden hue of an onion ring — Lark, maybe?), makes my head spin.

Also, her explanation that she felt she needed to delete the account to stop people from throwing onion rings at her onstage and turning it into "a whole thing" is pretty devastating. Honey, you are allowed to be a human being and have a fun pointless side project. Nobody's expecting you to justify your behavior — or your worship of the world's least date-friendly food. Still, some small comfort can be derived from the fact that, although a cruel universe is causing your favorite pop star to pull the plug on her social media side hustle, that Ella Yelich-O'Connor will keep on keepin' on, chowing down on those greasy circles of joy.

Of course, if the singer can't quite suppress the urge to start an anonymous Instagram account to promote an underrated foodstuff in the future, hopefully she'll consider one of the under-hyped but deeply delicious food items that vary substantially depending on the locale serving them: lamb chops (more delicious than bacon but never discussed... why?); starter bread (literally, the bread you get in bread baskets with the meal); or the thank-you mints you get with the bill (so unexpected after your death-breath food of choice). I, for one, appreciate Lorde's commitment to the dark art of #foodporn.