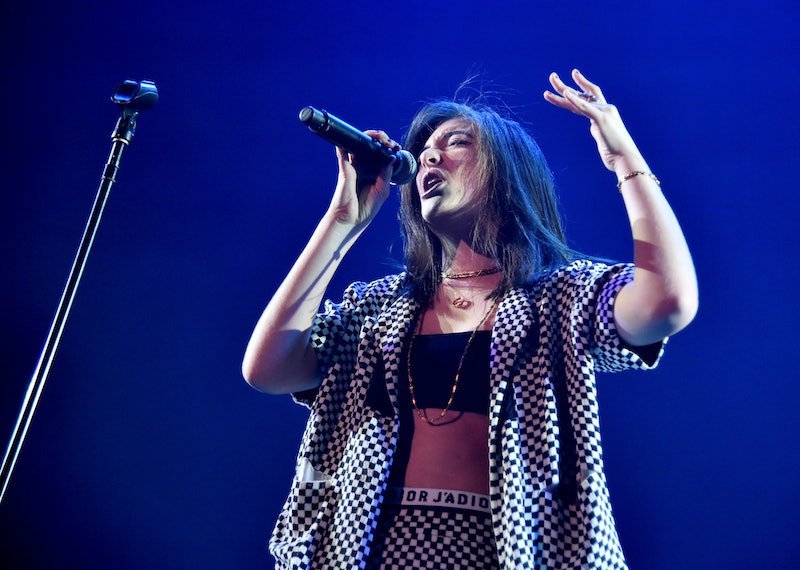 We know Lorde for her luminous melodies and even her tight friendship with Taylor Swift, but nothing could have prepared anyone for Lorde's allegedly brutally honest onion ring critiques. No, really. Rumors began flying after Lorde's management received an inquiry about a since-deleted Instagram account called @onionringsworldwide from New Zealand news outlet, Newshub, who collected the evidence that suggested that said account may be run by the singer. (Bustle has reached out to Lorde for comment, but did not receive an immediate response.) And, guys, the theory that Lorde had a secret onion ring Instagram account is the greatest thing I've ever heard.

Update: On Thursday, June 15, Lorde admitted on Jimmy Fallon that the secret onion ring Instagram account did, in fact, belong to her. "It was like a funny thing with my friends on the tour and I was like, this is a good pastime," she said.

Earlier: It all started when a fan gave the news outlet a tip. Sadly, not long after managers were contacted, the Instagram account was closed. Thankfully, this didn't happen without a few screenshots left for fans to use to piece together whether or not the rumor was true.

Thanks to geotagging on social media, it's pretty easy to find where our favorite celebrities are at any given moment. In this case, the tagging and onion ring reviews happened to fall in line with Lorde's whereabouts. This includes Tennessee, where she attended Coachella, and New York, where she currently lives. @Lordemusic also followed the Instagram account, which raised more suspicion. Again, there's nothing that confirms Lorde was in charge of the Instagram account but And, according to Newshub, other followers of the account included some of Lorde's associates: Jimmy Mac, Justin Warren and Maddy Budd.

Take a look at her fingers, and those holding the golden onion rings. They look a lot like Lorde's to me. Sure, the Instagram only had four posts, two with actual hands, but this feels like Lorde's doing, guys. I want to believe this onion ring thing is true.

It's unclear why the account was abruptly deleted, but, if this was her account, I'm curious as to why the girl has stopped living out her Anthony Bourdain fantasies. Sure, now that the onion ring melodramatics are finished, we can look forward to Lorde's upcoming album. Hopefully, though, we haven't seen the last of Lorde's alleged foodie side.