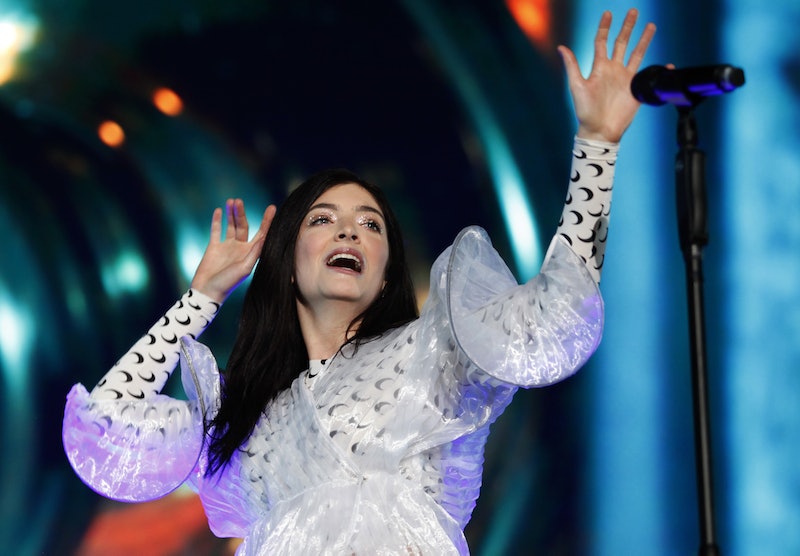 There's almost nothing redeeming about 2020 (other than J.Lo and Shakira's Super Bowl Halftime Show), but there might be one ray of light peaking through. Lorde teased that her new album was coming, and though she didn't say whether fans could expect new music this year, there's always hope. In an email sent to fans on Tuesday, May 19, the singer announced that she's actively working on new music, but you'll have to wait a while longer to hear any of it.

The singer wrote a personal letter in which she revealed that she's been back in the studio for the first time since the death of her dog Pearl in November, which affected her creative process and delayed her next album. "I started going back to the studio again in December, just for something to do, and to my surprise, good things came out,” she wrote. "Happy, playful things. I felt my melodic muscles flexing and strengthening."

Lorde also revealed that she's working with producer extraordinaire Jack Antonoff once again, after he previously produced her sophomore record Melodrama, which was nominated for Grammy Album of the Year. According to the singer, the pair was collaborating with trips between Los Angeles and her native New Zealand, but like everything else, their travels were halted by the coronavirus pandemic, which has caused a small delay in the process. “A thing started to take shape. And then, of course, the world shut down," she said. "We’re still working away — Jack and I FaceTimed for over an hour this morning going over everything. But it’ll take a while longer."

This means that fans will have to wait as Lorde and Antonoff finish the album at a slower pace due to the pandemic, and she cautioned her listeners to be patient. "As I get older I realize there’s something to be said for the pleasant feeling of waiting for something of quality to become available to you," she wrote. "I get this feeling when I make bread, or put my seedlings in after the last frost, or even when I wait for a particular package to arrive. In my opinion, the greatest treat I can give you is work that will last ten, twenty, thirty years. And that kind of work takes time."

However, she promised that her next album is forming very nicely. "I can tell you, this new thing, it’s got its own colours now. If you know anything about my work, you’ll know what that means," she wrote, referring to her oft-mentioned synesthesia, which allows her to see music as different colors. "The work is so f*cking good, my friend," she concluded. "I am truly jazzed for you to hear it." Here's hoping Lorde's new music comes in time to save 2020 from itself.

More like this
The Jonas Brothers' New Album Has A Very Meta Name
By Alyssa Lapid
Will Beyoncé Perform At Or Attend The 2023 Grammys?
By Jake Viswanath
Taylor Swift May Miss The 2023 Grammys For Reasons Fans Know “All Too Well”
By Jake Viswanath
Taylor Lautner Thought Taylor Swift's 2009 VMAs Interruption Was A "Skit"
By Alyssa Lapid
Get Even More From Bustle — Sign Up For The Newsletter
From hair trends to relationship advice, our daily newsletter has everything you need to sound like a person who’s on TikTok, even if you aren’t.