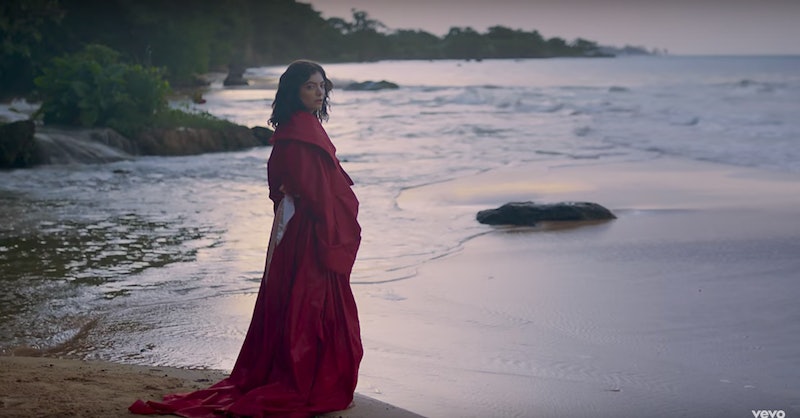 Lorde's music has always been well beyond her years, but Melodrama marked a new plane of maturity, trading teenage glory for complex reflections on love and loneliness. In "Green Light," she ditched a crowded nightclub to roam the city and dance alone, and Lorde's "Perfect Places" video finds her once again embracing solitude. In the clip, released on Thursday, the 20-year-old singer jets off to sprawling beaches, lush forests, and waterfall oases, but her globe-trotting will do more than give you wanderlust; it will make you rethink what really counts.

The visuals play like a deliberate kiss-off to the blurred nights she describes. "Every night, I live and die, meet somebody, take 'em home," she sings. Then later, "Now I can't stand to be alone." But in "Perfect Places," she revels in her isolation: pouring a cup of tea on an oceanside balcony, swaying around a barren room and a blazing fire.

Together, the video and lyrics play like a call-and-response. The Lorde depicted in the song is jaded, numb, fed up with a world that offers her little more than fleeting memories. But the one on-screen is uninhibited and proud, free to find herself, not lose her.

In a post annotating the lyrics on Genius.com, Lorde wrote that she penned the song during a feverish New York summer:

"My life was like a weird little etch-a-sketch I kept scribbling on and resetting, and all last summer, I couldn’t shake the feeling that everyone I knew or saw was searching for something – trying to transcend the news and the screaming pavements, drinking that one drink hoping it’d get them someplace higher. This song comes from that endless cycle of evenings and the violent heat of the summer."

"Perfect Places," then, upends what exactly "perfect" means. Being young isn't about living with abandon, but making mistakes, embracing difficulty, finding meaning. And for many people, that soul-searching can't be done amid wild nights and raucous parties, but by truly seeing the world — not necessarily by traveling, but by simply being present. In "Perfect Places," Lorde does both.