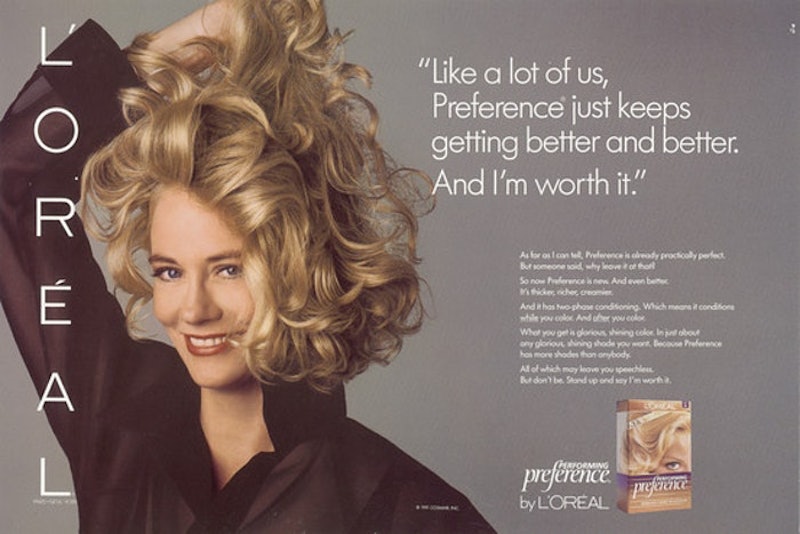 You wouldn't think a box of hair dye would have much to do with women's liberation, but the origin of L'Oreal's slogan was feminist as hell. While the words "Because I'm worth it" are instantly recognizable, they flared from an unexpected place: Pure female frustration.

The year was 1973, and the concept came from an advertising agency on Third Avenue in New York City, from the mind of a 23-year-old copywriter named Ilon Specht. Outside, feminists were marching in the streets with picket signs, demanding equal rights, equal pay, and equal ownership over their bodies. Roe v. Wade became the law of the land, a Ladies’ Home Journal sit-in forced the male-run magazine with a mostly-male staff to let women write a portion of the articles. Not far away in Washington DC, women marched to the White House with a banner that read “We Demand Equality," pushing the Equal Rights Amendment.

Specht was surrounded by men twice her senior, listening to them pitch ideas for beauty campaigns. Sure, the social scene was changing, but you wouldn't have known it if you were at the marketing meetings of McCann-Erickson. After receiving one too many copy edits back where "woman was crossed out and written over with the word 'girl,'" Specht wanted to create something that felt like a departure, that actually represented women beyond how they're perceived by men.

Male perception was something Specht was keenly familiar with. She recalls her years working in advertising as rampant with sexism.

"The men in the office would treat you like a little girl, because that's how they liked for you to act. Like you looked up to them and needed them," Specht tells Bustle.

She also recounts how dealing with opinions from male colleagues about your opinion was as routine as pouring your morning cup of coffee. Specht shares with Bustle that in one of her first meetings at L'Oreal, the male account executives smiled at the women on the team and told them they all looked like models.

It wasn't just boardroom sexism that Specht was up against, either: Despite the progressively feminist social scene, there was plenty of contradictory messaging in mainstream advertisements, particularly in beauty. One of L'Oreal's main competitors, Clairol, was initially the only at-home coloring kit on the market, and had singlehandedly brought hair dye (once thought to be the symbol of the bad girl) into the mainstream.

In 1956, Clairol's hair dye campaign centered around the idea of "natural" hair, so subtle that your husband, boyfriend, or mother would pick up on the change.

"Does she or doesn't she," the ad reads. "Only her hair dresser knows for sure."

The campaign turned out to be impactful — according to Time, one in two women started dyeing their hair afterwards, a huge increase from one in 15. L'Oreal eventually wanted a piece of that pie, but their approach needed to be markedly different.

But her seniors didn't quite grasp that when it was time to work on the L'Oreal campaign. "They wanted to do something with a woman sitting by a window, and the wind blowing through the curtains. You know, one of those fake places with big glamorous curtains. The woman was a complete object. I don't think she even spoke. They just didn't get it," Specht told Malcolm Gladwell, author of Obsessives, Pioneers, and Other Varieties of Minor Genius. Knowing the scene was a relic from a 1950s past, Specht decided to take the campaign in a different direction.

"One of the best things I’ve ever written was done in a moment of anger. I thought, it’s not about men, it’s about ourselves. It’s not for you that we're going to do our hair," she explains. “I’m not making my hair so you should like me."

She put the woman in the ad front and center instead, a woman unburdened with the search for male approval. The original copy read:

"I use the most expensive hair color in the world. Preference, by L'Oreal. It's not that I care about money. It's that I care about hair. What's worth to me is the way my hair feels. It feels good against my neck. Actually, I don't mind spending more for L'Oreal. Because I'm worth it."

The slogan was revolutionary because it was neither about pleasing others or offering up a cookie-cutter template of what a woman should look like.

"'Because I’m worth it' makes it about me and my choice and myself, whereas 'Does she or doesn't she' made it about someone judging you," Specht explains.

The idea struck a chord with many women. Gladwell pointed out that L'Oreal was surprised to discover that during the first few years of the campaign, a big chunk of their users were first-time hair dyers. But these weren't teens experimenting with streaks; these consumers were women who were in the middle of divorces.

"We had far more women who were getting divorced than Clairol had. Their children had grown, and something had happened, and they were reinventing themselves," Herta Herzog, former L'Oreal head researcher, shared in Gladwell's book.

"When you’re younger, you get frightened. We were told not to have sex, not to do anything that toed the line, to be good girls. And many listened," Specht says. Her message was one of the ways in which women reclaimed themselves, their identities, and their ability to make choices about their appearance — and 50 years later, even more women know one thing for a fundamental, inarguable fact: They're still worth it.

More like this
The Best Beauty Looks From The 2022 BET Awards
By Audrey Noble
10 Show-Stopping Manicures From The 2022 BET Awards
By Paris Giles
35 Ideas For 4th Of July Nails That Go Beyond Red, White, & Blue
By Audrey Noble
"Transparent Eyeliner" Is The Perfect Summer Look For Makeup Minimalists
By Olivia Rose Ferreiro
Get Even More From Bustle — Sign Up For The Newsletter